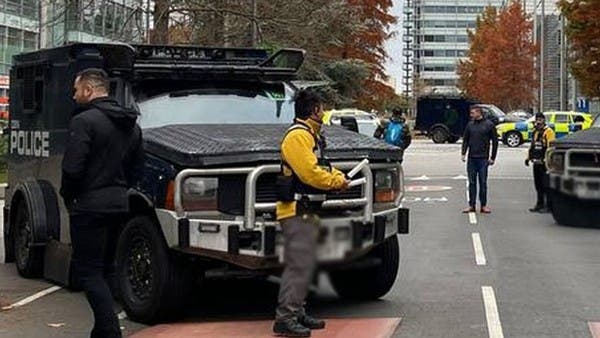 Armed vehicles have been deployed outside the Iran International television studios in the British capital after two of its journalists were threatened by Tehran, the channel said Saturday.
There were around seven vehicles outside the studio in Chiswick Park, west London, after “severe and credible” threats were recently made against two of the UK-based channel’s journalists, one of its spokesmen told AFP on Saturday.

Police confirmed that its officers “are working in response to potential threats projected from Iran against a number of UK-based individuals.

“Whilst we will not be going into detail as to what these are, it does include the presence of overt armed police officers in the vicinity of the west London offices of a UK-based Persian language media company,” the force told AFP in a statement.

The channel, which has been airing recent protests in the Middle Eastern nation, has been proscribed as a “terrorist” organization by the regime, but can still be accessed via the Internet.

“The threats against us have escalated as the protests in Iran go on, because we cover them 24/7,” said the media outlet’s spokesman.

He said the presence of armored vehicles was a “massive deterrence” that had “reassured” staff.

“They’ve worked there for five years, they’re used to this, their families get threatened in Iran,” he told AFP.

“Recently in Tehran there have been wanted posters going up with some of our presenters’ faces on them.”

“But the mood is just getting on with it.”

Britain’s domestic spy agency MI5 said Wednesday that Iran wants to kidnap or kill UK-based individuals it deems “enemies of the regime,” with at least 10 such plots uncovered so far this year.

Director general Ken McCallum warned in a speech at the agency’s Thames House headquarters that Iran “projects threat to the UK directly, through its aggressive intelligence services.”

He said this could include “ambitions to kidnap or even kill British or UK-based individuals perceived as enemies of the regime.”