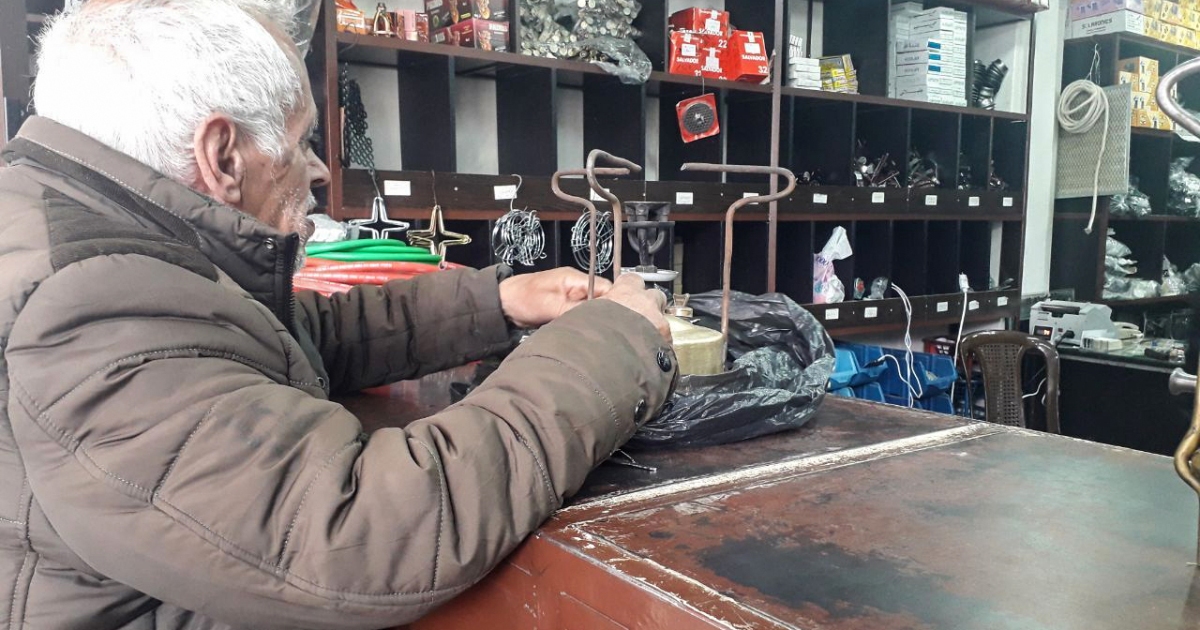 A worsening economy and a greatly reduced electricity supply has left Syrians relying on old-fashioned ways for power.

Abu Mohamed, a Syrian man in his sixties, walks down Homs’ Al-Hamedya Street carrying a vintage kerosene stove, which he says urgently needs to get fixed. When he reached the store from which he bought the tool not so long ago, he was told the reason it had stopped working: extensive usage and poor quality fuel.

Syrians, who are experiencing their worst bout of economic hardship since their country was ravaged with war more than a decade ago, have been increasingly relying on vintage kits and old ways to cope with fuel shortage and long hours of electricity outages.

Without electrical power, Syrians, an unprecedented 90 percent or more of whom have fallen below the poverty line, are without warmth and unable to cook or wash. Instead, many have had to turn to an antiques market that they had long ignored.

As with everything in the country, the Coppersmiths Market of Homs, which is dedicated to the manufacturing and sale of brass lamps and old stoves, among other antiques, has lived through drastic change over the past decade, as a result of the war in Syria.

“Before 2010, our customers were Western or Arab tourists who purchased these items as souvenirs and paid for them in dollars. It was a period of prosperity for the market and we did so well,” Abu Khaled, who said he inherited the handcraft from his ancestors, told Al Jazeera.

As the violence engulfed Homs, the market was severely destroyed and businesses came to a halt, said Abu Khaled.

“We returned and reopened our stores in 2015, and since then, our client base has changed and so did our income. Customers have since been impoverished Syrians who mostly want to fix their long forgotten brass stoves,” he said.

The more frequently-wanted task, he added, is replacing the heads of the stoves, which can cost about 10,000 to 15,000 liras, or $2.55 to $3.8 according to the current official rate, a small amount compared with the sales the traders made in the old days, he said.

Four of Syria’s 14 power plants have been severely destroyed as a result of fighting, leaving Syria with 18 percent less power production than its prewar levels. To combat this, the Syrian government has imposed an electricity rationing scheme to meet national demand.

According to the scheme, regions across Syria get only one hour of electricity for every “dead” five or 10 hours of power outage. This has crippled households and sent families looking for alternatives.

Amira Youssef, a mother of nine children who lives in Bab Touma in the capital Damascus, regrets ever getting rid of her kerosene stove.

“I thought its time was up as our lives improved before the war. I eventually got annoyed by it occupying the little space it took up in the house and decided I no longer needed it,” she told Al Jazeera by phone.

Youssef explained that with the economic situation deteriorating, and having so many children – and 13 grandchildren – to cook for, she had to buy another stove for 60,000 liras.

“I can’t cook on firewood like others in the countryside do as I live in a flat in the city. This kerosene stove is my only option to put food on the table,” she added.

In rural Syria, balls of sun-dried animal dung mixed with hay, in addition to firewood, have become common fuel for outdoor stoves and ovens, as canisters of cooking gas often take three months to get delivered, and last only 20 days.

In the freezing winter, families huddled around fires lit by dung for much-needed warmth.

But back in the city, such fires are not an option.

Abdelrazek Toulaimat’s family used to sell kerosene lamps and stoves many decades ago.

“But when electricity entered houses and pipelines of cooking gas fed every household, we stored away what was left of those items,” the owner of Toulaimat Stores said.

However, as a diesel bottleneck began building up in the country, beginning in 2014, demand for lamps and stoves that are lit by the easier and cheaper-to-obtain kerosene grew, Toulaimat explained.

“Like other stores, we brought down the stock we had forgotten about, and they quickly sold out. So we made more, in different sizes, and sold them at higher prices. The stoves are sold for 4,000 liras each, and a lamp costs roughly 20,000,” he said, noting that the market for used items is also popular.

The Syrian government blames the United States’ Caesar Act for causing severe fuel shortages in the country. The act imposed strict sanctions that have interrupted shipments of imports from coming through since its enactment in 2019.

Syrians across the board have felt the effect, although the US, along with the Syrian opposition, has said that the act is necessary to financially punish Syrian President Bashar al-Assad and his allies.

In addition to the power cuts caused by the national electricity rationing scheme, Lo’ay al-Mohamed, a father of three children in Homs, said that a fault in the grid can take days to get fixed, leaving people in the dark.

“We had to bring out our old kerosene-lit lanterns. We’ve had them as pieces of decoration in our house, but we brought them back to their original purpose as they need only a little kerosene or mazut to light for hours,” he said.

Nagham Qasem, an engineering student, said candles were once associated with romance and soft moods. “But when you’re forced to use them, and for long hours, their beauty wears off,” said the 23-year-old student at al-Ba’th University in Homs.

“Candles have become an icon of a war that refuses to abate without consuming us,” Qasem said. “But my friends and I, and all school students I know, are resilient. We haven’t given up to the darkness, and have been studying by candlelight.”