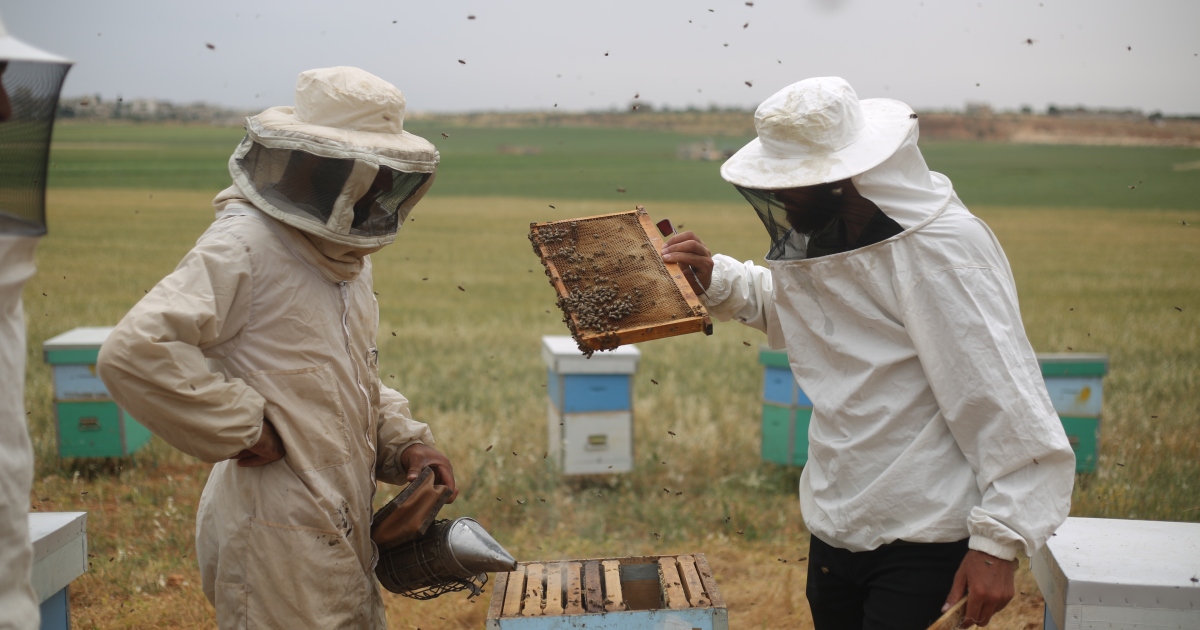 Beekeepers in northwestern Syria have to do whatever they can to produce honey – despite the dangers they face.

Ahmad al-Hassan arranges a wide array of colourful honey jars on his shelf in his shop in Idlib city.

Beekeeping is the only work the 29-year-old Syrian has ever known, but conflict, economic deterioration, and even climate change have become painful stings to his livelihood.

A short drive away from his shop, al-Hassan and four employees wear their protective clothing before checking in on their 50 hives.

“There isn’t enough land for the bees any more,” the frustrated beekeeper said as he looked into the distance. “Before the current situation, we had swathes of land to work with.”

Now, they may have to relocate their bee colony to another plot of land, where the bees can forage for nectar and pollen.

Idlib is in northwestern Syria, where an estimated 97 percent of the residents live in extreme poverty, and most are internally displaced from the country’s 11-year uprising-turned-war. Many live in tents in displacement camps.

Al-Hassan has taken risks with his bee colonies, often moving them close to the Turkish border or even near de facto front lines with Syrian government-held areas so his bees have access to flowers and plants.

“We worry when we place the hives near a front line, but it’s better than letting the bees just die,” he said with a sigh. 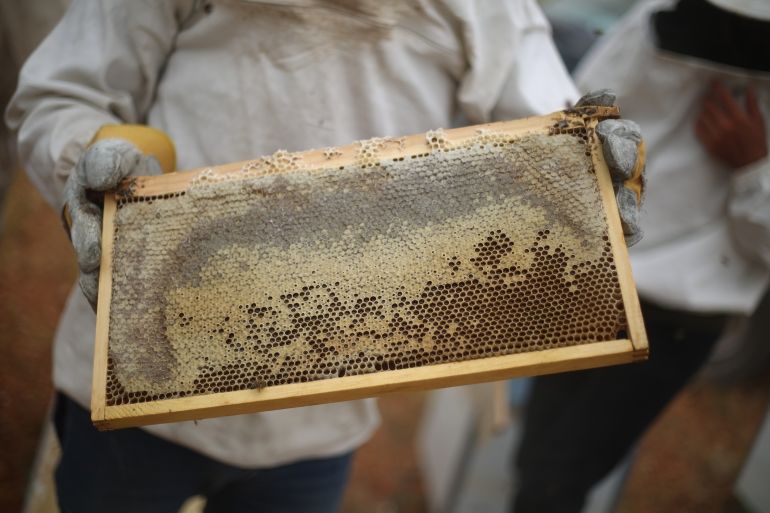 Al-Hassan has had to cut back on his use of foreign bees, as they are too expensive

Production has continued to decline every year, and so has business.

“We don’t export anything,” al-Hassan said as he rearranged jars of honey on his shelf. “All we rely on is local demand.”

But the local market in northwestern Syria has been financially shattered.

Economic woes have compounded for millions across opposition-held Idlib and northern Aleppo provinces.

The Turkish lira, the primary currency used in the region, has sharply lost value, and the area is also over-reliant on imports for wheat, fuel, and essential food items.

And even when al-Hassan and his crew find some open land for his bees, they often discover there are fewer plants and flowers. “There is less fennel flower, anise, and cotton,” he explained. “Less flowers means less production.”

The beekeeper was only able to produce half of the honey, wax, pollen, and royal jelly he had yielded the year prior.

Climate change has been a factor.

“Winter is like summer, and summer is like winter,” al-Hassan explained, as he pointed to the unexpected gloomy and cloudy weather. “Our bees continue to die at increasing rates.”

Warming temperatures and a decline in rainfall have ravaged northern Syria in recent years. Humanitarian and development agencies have said that climate change could further worsen economic conditions, public health, and food insecurity in the war-torn country.

“Rainfall is sporadic and happens at more unexpected times – even the wind patterns have changed,” al-Hassan said. “We can barely break even every season now.”

Going forward, the beekeeper is revisiting his budget to keep his business afloat. He used to be able to import bees that produce more honey, honey pollen, and other derivatives, unlike Syrian bees, which produce less honey and wax.

“It costs almost $200 to run a hive of foreign bees, as opposed to about $35 for a local one,” al-Hassan said. “But Syrian bees don’t produce nearly as much honey.”

For now, al-Hassan and his team of beekeepers are moving their colonies towards the Turkish border, hoping the bees will venture to greener pastures and return safely with pollen and nectar – and provide a financial lifeline amid the country’s economic crisis.