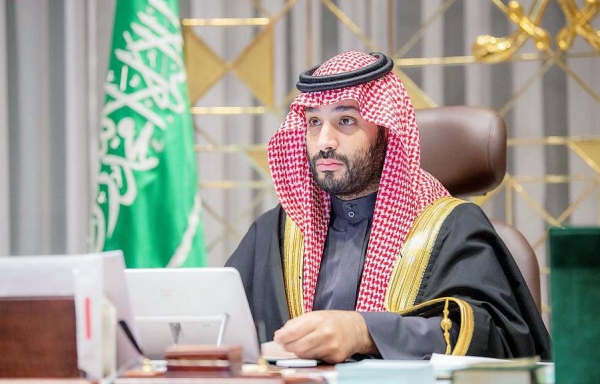 Crown Prince Muhammad Bin Salman, deputy premier and minister of defense, emphasized that the economic transformation journey adopted by the Saudi government continues to meet their remarkable achievements and targets as per the directives of Custodian of the Two Holy Mosques King Salman.
“The budget was a confirmation of the results achieved from economic and financial reforms aimed at promoting economic growth and financial sustainability towards a vibrant society, a prosperous economy, and an ambitious nation,” he said while commenting on the state general budget in a statement carried by the Saudi Press Agency.

The Crown Prince stated that the government is committed in the 2022 budget to the planned spending in the medium term, which was previously announced last year, and expects to achieve budget surpluses for the fiscal year 2022.

This is through completing work on developing the financial planning process and raising spending efficiency, in addition to developing various sources and achieving more stability of government revenues, which supports the objectives of the Financial Sustainability Program, he said while noting that this program seeks to complete the march towards enhancing economic stability and sustainability in the medium and long terms.

“The financial and economic results and indicators confirm that we are progressing positively, as the coming year’s budget comes amid a global climate characterized by great challenges in light of the repercussions of the COVID-19 pandemic, and great local ambitions, but in a financially disciplined framework that focuses on the efficiency and effectiveness of directing government spending and utilizing available resources to achieve the best return from them, while maintaining financial stability as a fundamental pillar of sustainable growth.”

The Crown Prince reiterated that the economic recovery, initiatives, and policies of financial control, and the development of public financial management and its efficiency contributed to sustaining the reduction of the budget deficit while maintaining the achievement of the main objectives of the Vision 2030, and it is expected that the deficit in 2021 will reach around 2.7 percent of GDP compared to 11.2 percent in 2020, which was affected by the pandemic.

“While we expect to achieve financial surpluses that may exceed 2.5 percent of GDP in 2022, these surpluses will be used to increase government reserves to counter the needs posted by the pandemic, as well as to strengthen the Kingdom’s financial position, and boost its capabilities to face global shocks and crises.”

The Crown Prince explained that the economic and structural reforms that have been implemented since the launch of the Kingdom’s Vision 2030 have contributed to reducing the negative impacts associated with the pandemic.

“Until the end of the third quarter of 2021, the Kingdom achieved high rates of real GDP growth for the non-oil sector, which amounted to about 5.4 percent, driven by a 7 percent growth in the private sector, as this was reflected in significant growth in many economic activities and sectors, some of which retracted to pre-pandemic levels.

This growth was accompanied by a decline in unemployment rates among citizens from 12.6 percent by the end of last year to 11.3 percent in the middle of the year due to the increase in job opportunities available to citizens.”

The Crown Prince also stressed that the citizen’s role today has become pivotal in economic development, as he or she directly contributes to gaining achievements in various promising fields and sectors, in addition to increasing women’s participation that represents a positive force for society. “The Kingdom’s Vision 2030 focuses on achieving and deepening the impact and involvement of the private sector in the transformation journey to make a qualitative leap in various sectors, as significant progress has been made in implementing several programs.

These programs will contribute to progress and development in various fields, diversifying the economy, raising the level of quality of life, and developing sectors contributing to the economy. Reviewing and updating strategies, programs, initiatives, and procedures are being implemented regularly to ensure their effectiveness and correct their course whenever the need arises and to achieve the objectives of the Kingdom’s Vision 2030,” he said.

The Crown Prince stressed the important role of the private sector as a major and vital partner in development, and that the government, in addition to the areas of general spending, is implementing various major initiatives that will contribute to strengthening the private sector’s role.

He noted that the National Investment Strategy and Shareek Program in addition to the Public Investment Fund program will contribute to providing great opportunities for investors to participate in many sectors and different regions within the Kingdom, and it is planned that the total spending in the Kingdom will reach SR27 trillion by 2030, including investments of the Public Investment Fund, the private sector, government spending, and private consumption.

This also supports the ongoing reforms undertaken by the government in developing the business climate and creating an attractive environment for investors to contribute to promoting economic growth.

The Crown Prince highlighted the role of the second phase of the vision realization programs in the qualitative shift of the Saudi economy and achieving what citizens aspire to improve and raise the quality of services and investment opportunities and increase employment opportunities, including the National Industrial Development and Logistics Program (NIDLP), the National Transformation Program, the Financial Sector Development Program and the Human Capability Development Program, the Quality of Life Program, and the Housing Program and its contribution to raising the levels of citizens’ ownership of housing.

The Crown Prince also underscored the objectives of the Public Investment Fund program in achieving the goals of the Kingdom’s Vision 2030, as it represents the local and foreign investment arm that contributes to diversifying the economy and sources of income, which supports and complements the government efforts to diversify the economy, and has contributed to achieving clear impact and achievements at the local and global levels in pursuit of its ambitions in the medium term, including the Fund’s contribution and its subsidiaries to the non-oil domestic product, and raising the percentage of local content in its investments and its subsidiaries by up to 60 percent.

The Crown Prince emphasized the important role of the National Development Fund and its affiliated development funds and banks through programs and initiatives that support various economic activities and sectors and increase their competitiveness by providing the necessary financing for national institutions and companies, including small and medium enterprises, and enhancing the role they play to support the growth of non-oil domestic product and create more jobs in the economic sector.

“The government’s success in confronting the pandemic and curbing its economic and social effects proves the strength of the Kingdom’s economy in facing challenges and that the government is working to support countries and international organizations in their efforts to confront the crisis,” he pointed out.

The Crown Prince also stressed the leading role being played by the Kingdom in stabilizing energy markets, while at the same time leading the next green era, noting that the Saudi Green Initiative and the Middle East Green Initiative draw up the direction of the Kingdom and the region in protecting the land and nature and placing it on a clear and ambitious roadmap that will contribute strongly to achieving global goals. “The Kingdom will also continue during the coming year and in the medium and long terms to increase the attractiveness of the Kingdom’s economy as a hub for local and foreign investments, and diversify the economy by developing promising sectors such as tourism, technology, industry, and mining,” he added.
#COVID-19  #Covid
Add Comment