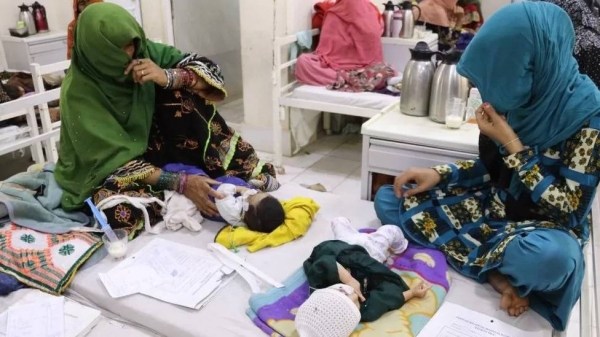 Five top non-governmental organizations (NGOs) have halted work in Afghanistan after women were banned from working for them by the Taliban government.
Care International, the Norwegian Refugee Council (NRC) and Save the Children said they could not continue their work "without our female staff".

The International Rescue Committee also suspended services while Islamic Relief said it was stopping most of its work.

The latest edict on NGOs came just days after the Taliban banned women from attending university.

Abdel Rahman Habib, spokesman for the Taliban's ministry of economy, accused female workers at the foreign aid groups of breaking dress codes by not wearing hijabs.

The Taliban threatened to cancel the licence of any organisation that did not swiftly comply with the ban.

A number of aid groups have since spoken out, demanding that women should be allowed to continue working for them.

The leaders of Care, the NRC and Save the Children said in a joint statement the organisations "would not have jointly reached millions of Afghans in need since August 2021" were it not for their female staff.

"Whilst we gain clarity on this announcement, we are suspending our programmes, demanding that men and women can equally continue our lifesaving assistance in Afghanistan," their statement added.

Separately, the International Rescue Committee (IRC) - which employs 3,000 women across Afghanistan - said its ability to deliver services relied on "female staff at all levels of our organisation" and if women could not be employed, they could not deliver to "those in need".

Islamic Relief said it had taken the "difficult decision to temporarily suspend non-lifesaving activities in Afghanistan" including "projects that support impoverished families to earn a living as well as education and some healthcare projects". Life-saving healthcare, it added, would continue.

"Islamic Relief is calling on the Afghan authorities to immediately lift the ban on female NGO workers," the organisation said.

"The ban will have a devastating humanitarian impact on millions of vulnerable men, women and children across the country. We are dismayed that this ruling comes just a few days after increased restrictions on Afghan girls' access to education."

Ramiz Alakbarov, the United Nations' top humanitarian coordinator, said the UN was trying to get the ban reversed and that it was a "red line for the entire humanitarian community".

The United Nations could stop humanitarian aid delivery in Afghanistan if the Taliban authorities do not reverse their edict banning women aid workers, the official told the BBC.

But Mr Alakbarov said it was still unclear what the Taliban meant by its edict.

He said the Taliban's minister of health had told the UN the agency should continue its health-related work and women could "report to work and discharge their services".

Other ministries had also contacted the UN directly to say work in the areas of disaster management and emergencies should continue, he added.

Jan Egeland of the NRC said nearly 500 of the aid group's 1,400 workers were women, and that female staff had been operating "according to all traditional values, dress code, movement, [and] separation of offices".

He said he hoped the decision would be "reversed in the next few days" and warned that millions would suffer if NGOs' work was obstructed.

NGOs also expressed concern about the effect the ban would have on jobs "in the midst of an enormous economic crisis".

Female Afghan NGO workers acting as the main earners in their household previously told the BBC of their fear and helplessness following the ban.

One asked: "If I cannot go to my job, who can support my family?" Another breadwinner called the news "shocking" and insisted she had complied with the Taliban's strict dress code.

The ban triggered international outcry, with US Secretary of State Antony Blinken warning it would "disrupt vital and life-saving assistance to millions".

Since seizing back control of the country last year, the Taliban have steadily restricted women's rights - despite promising its rule would be softer than the regime seen in the 1990s.

As well as the bans on NGO workers and female university students - in the case of students, now being enforced by armed guards - secondary schools for girls remain closed in most provinces.

Women have also been prevented from entering parks and gyms, among other public places.
#Afghanistan
Add Comment