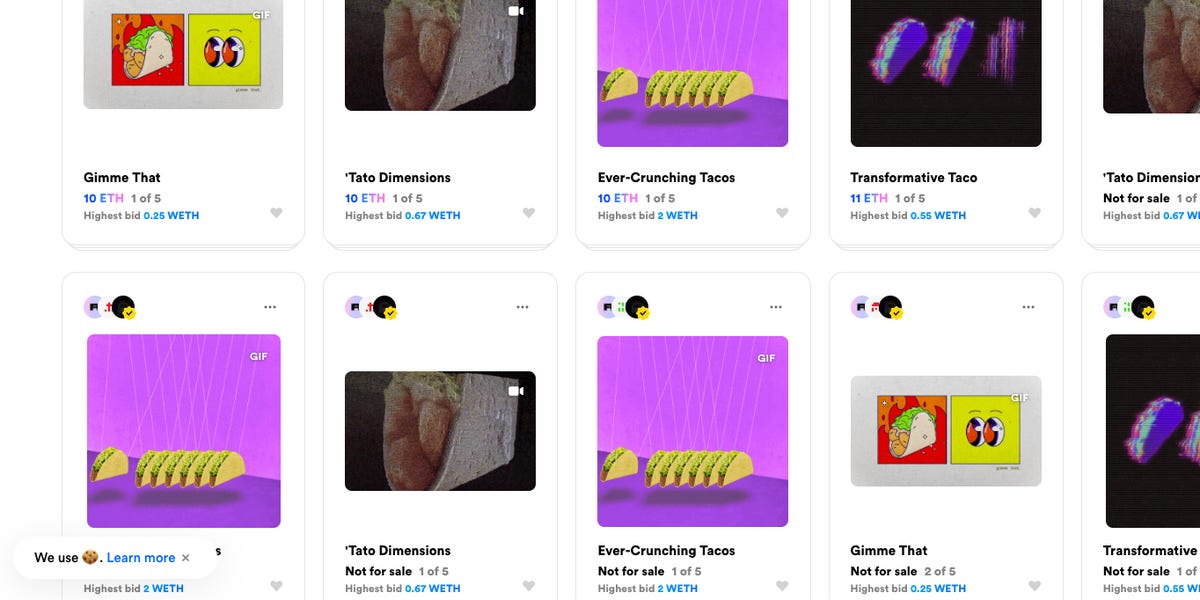 The booming non-fungible tokens market is due in part to institutional, celebrity, and brand adoption.
If you've been on the internet recently, you've almost definitely seen stories about non-fungible tokens (NFTs), as the blockchain phenomenon becomes increasingly common for everyone from Paris Hilton to Christie's auction house.

NFTs, or Non-fungible tokens, have been around for a while, but the crypto-art boom is just getting started.

The first shift in bringing NFTs into the mainstream has to do with institutional support. That's where Beeple and Christie's come in.

Crypto artist Beeple made headlines for selling the highest-valued crypto art piece to date, at a staggering $69 million. That figure is enough to turn heads, but what's particularly important is that a legacy auction house like Christie's is getting in on the NFT boom.

Increased media coverage and market growth in the NFT space have resulted in celebrities mining the potential of digital art, as well.

Grimes was a relatively early adopter, selling pieces of crypto art in February at a valuation of $5.8 million, Insider reported. Other singers like Steve Aoki and Kings of Leon have released music as NFTs and netted millions in sales. And the CEO of Twitter, Jack Dorsey, is auctioning off the first-ever Tweet to raise money for charity.

Paris Hilton auctioned a drawing of her cat on NFT platform Cryptograph, Decrypt reported. And the Associated Press, one of the world's largest news agencies, sold its NFT "The Associated Press calls the 2020 Presidential Election on Blockchain – A View from Outer Space," for about $180,000, Coindesk reported.

And while he might not be a celebrity, the creator of the "Bad Luck Brian" meme sold an NFT of the original photo for $36,000 earlier this week.

The NFT market experienced huge growth last year, with buyers vastly exceeding sellers in what has grown into a $250 million market, according to a 2020 report from tech tracking company L'Atelier BNP Paribas and nonfungible.com.

The value of NFTs is in part based on the product's originality. NFTs cannot be destroyed, deleted, or duplicated. The token exists solely on its native platform, stored on the Ethereum blockchain. Elements from one platform cannot be moved to another.

For celebrities, collectors and brands, NFTs also represent a new way to reach fans or customers and to make money.

The NFT boom has gotten so intense that the platform Nifty Gateway, a popular site for selling NFTs and crypto art, had to close out one of its CEO's email accounts after an influx of traffic to the site overwhelmed his inbox.

Major brands adopting NFTs signify that this boom is not limited to celebrities.

One of the earliest brand adopters was the NBA, which released its "NBA Top Shot" NFT collectibles in October. According to analysis from cryptoslam.io, a data tracking operation that aggregates cryptocurrency sales by platform, the all-time sales volume for NBA Top Shot is currently $354,327,277.38.

More recently, Taco Bell released a series of $1 NFTs to commemorate the return of their much-loved potatoes. Insider reported that the fast food restaurant quickly sold out and that some buyers are reselling the NFTs for as much as $3,000.
Add Comment