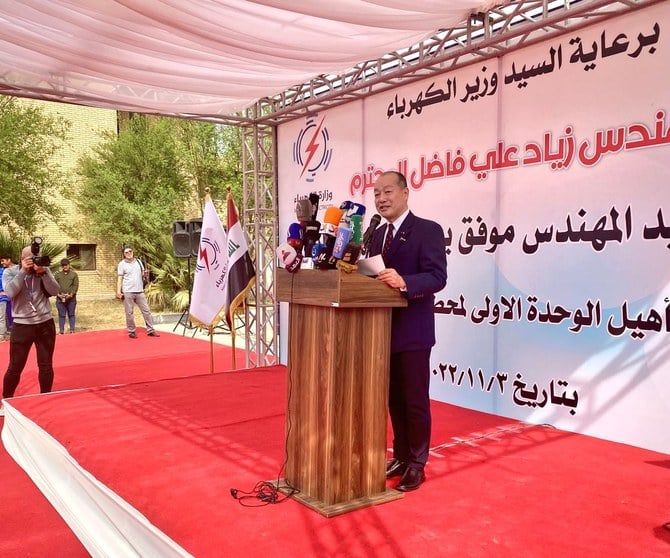 Japan’s Parliamentary Vice-Minister for Foreign Affairs Takagi Kei visited Baghdad, the capital of the Republic of Iraq, and Basra Governorate in the south of the country from Nov. 1-4.

Many Iraqi guests, including Atheer Daoud, Minister of Commerce of the Republic of Iraq, and Hummam Ahmed AbdulJabbar, Dirctor General of the State Company for Iraqi Fairs and Commercial Services, attended the “Japan Day” event.

Takagi met with Mohammed Al-Sudani, Prime Minister of Iraq, and exchanged views on the friendly bilateral relations and the regional situation.

During the meeting, Japan’s Parliamentary Vice-Minister welcomed the fact that Iraq overcame the difficult political situation and formed the new government almost a year after the election of the Iraqi Council of Representative last October.

He also expressed his hopes that the new government would play an important role towards the stability in the Middle East region and economic reforms in Iraq.

In response, Prime Minister Al-Sudani expressed his gratitude for the support from Japan over the years and emphasized that the new government intends to strengthen the stability and safety of Iraq and promote economic reforms.

Takagi also met with Omar Al-Barazanchi, Undersecretary for Administrative, Technical and Legal Affairs of the Ministry of Foreign Affairs of the Republic of Iraq and exchanged views on bilateral relations and cooperation between Japan and Iraq.

Takagi noted that Japan’s assistance has contributed to improving the lives of the Iraqi people and presented his compliments to the efforts of the people involved from both countries. Ziyad Fadhel, Minister of Electricity of Iraq, who participated in the ceremony of Hartha Thermal Power Station, expressed his appreciation for Japan’s assistance in providing the stable supply of electricity.

He also participated in the dinner hosted by Dargham Abdul Wahed, Second Deputy Governor of Basra, and exchanged views on activities of Japanese companies in Basra Governorate.