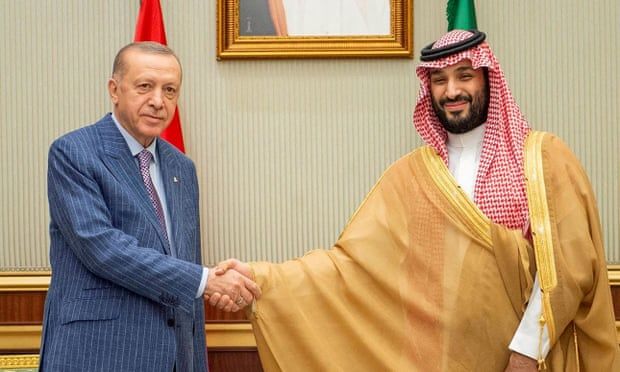 Analysis: regional rivals reconcile in Jeddah while reason for three-year rift remains elephant in the room
With awkward embraces and fixed grins, Recep Tayyip Erdoğan and Mohammed bin Salman struck a pose of reconciliation. For the past three years, the presence of the Turkish leader and the Saudi crown prince in the same room would have been unthinkable, but in a drawing room of a Jeddah palace on Friday, both tried to signal a new beginning.

There was no sign of the acrimony that had set the regional rivals apart and – most definitely – no mention of the reason for the rift: the Saudi murder of Jamal Khashoggi.

Instead, Erdoğan, who had been prepared to take bilateral relations between regional heavyweights beyond the brink, seemed content to be standing in his rival’s palace. The Saudi crown prince, meanwhile, had the look of a man who had won a prize.

The path to this point had been fraught. Ties between Saudi Arabia and Turkey had been mostly severed since October 2018, when a team of assassins, most of them security aides to Prince Mohammed, flew to Istanbul to ambush and dismember the Saudi dissident inside the kingdom’s consulate in Istanbul.

But the murder was taped by Turkish spies and the ensuing investigation led to the heart of Prince Mohammed’s court, resulting in Erdoğan boycotting the defacto leader and rebuffing billions of dollars in compensation offered by Saudi envoys.

It also amplified a faultline at the time between an alliance of Saudi Arabia, the UAE and Egypt, on one hand, and an opposing bloc of Qatar, Turkey and the remnants of Egypt’s Muslim Brotherhood on the other.

For more than three years, the two sides dug in, and Erdoğan rarely missed a moment to embarrass the Saudi heir, or to assert Ankara as a regional counterweight to Riyadh. But, battered by a troubled economy at home, facing an election, and seemingly tiring of isolation, Erdoğan’s hardline stance has gradually given way to realpolitik.

He has reached out to the UAE and Israel and has even made overtures to Egypt, where ties have remained poisonous since the coup that ousted the regime of Mohamed Morsi and ushered in the strongman Abdel Fattah al-Sisi.

Saudi Arabia, however, was the trickiest bridge to cross. For Erdoğan to win a reset, he needed to eat humble pie.

Last year a view started to take shape in Turkey that it had reaped little advantage from its standoff with Riyadh. With Donald Trump still in the White House, there may have been more of an angle for leverage. But the 2020 US election changed that; Joe Biden has distanced himself from both leaders, and neither are particularly fond of him.

If there was to be detente, however, one problem needed to be fixed; the ongoing in trial in absentia in Istanbul of Khashoggi’s accused killers. Earlier this month, Prince Mohammed got his wish when a Turkish prosecutor decided to stop the trial. The stage was set.

So, with eyes on trade ties, and using a pilgrimage to Mecca as cover, Erdoğan stood in front of Prince Mohammed on Friday, his ambitions to consolidate a rival power base to Riyadh subsumed by domestic politics and a desperate need for economic growth that trade ties with Saudi Arabia would help

Erdoğan also paid homage to the Saudi monarch, King Salman, with whom he had tried to deal directly in the weeks after Khashoggi’s death in an effort to sideline Prince Mohammed.

At home, his visit was observed in sombre tones, with any mention of Khashoggi kept to a minimum.

“My visit is the manifestation of our common will to start a new era of cooperation as two brotherly countries,” Erdoğan said before leaving Istanbul.

He was met in Jeddah as if nothing had ever split the two countries. Privately, however, Saudi officials were jubilant. Erdoğan’s trip had capped Turkey’s ambitions to play more of a regional role, one official told the Guardian. “He needs us more than we need him, and he’s the one traveling to us. This stance of his has cost him billions in lost revenues. Any trade will be on our terms.”
#Jamal Khashoggi  #Donald Trump  #Joe Biden
Add Comment