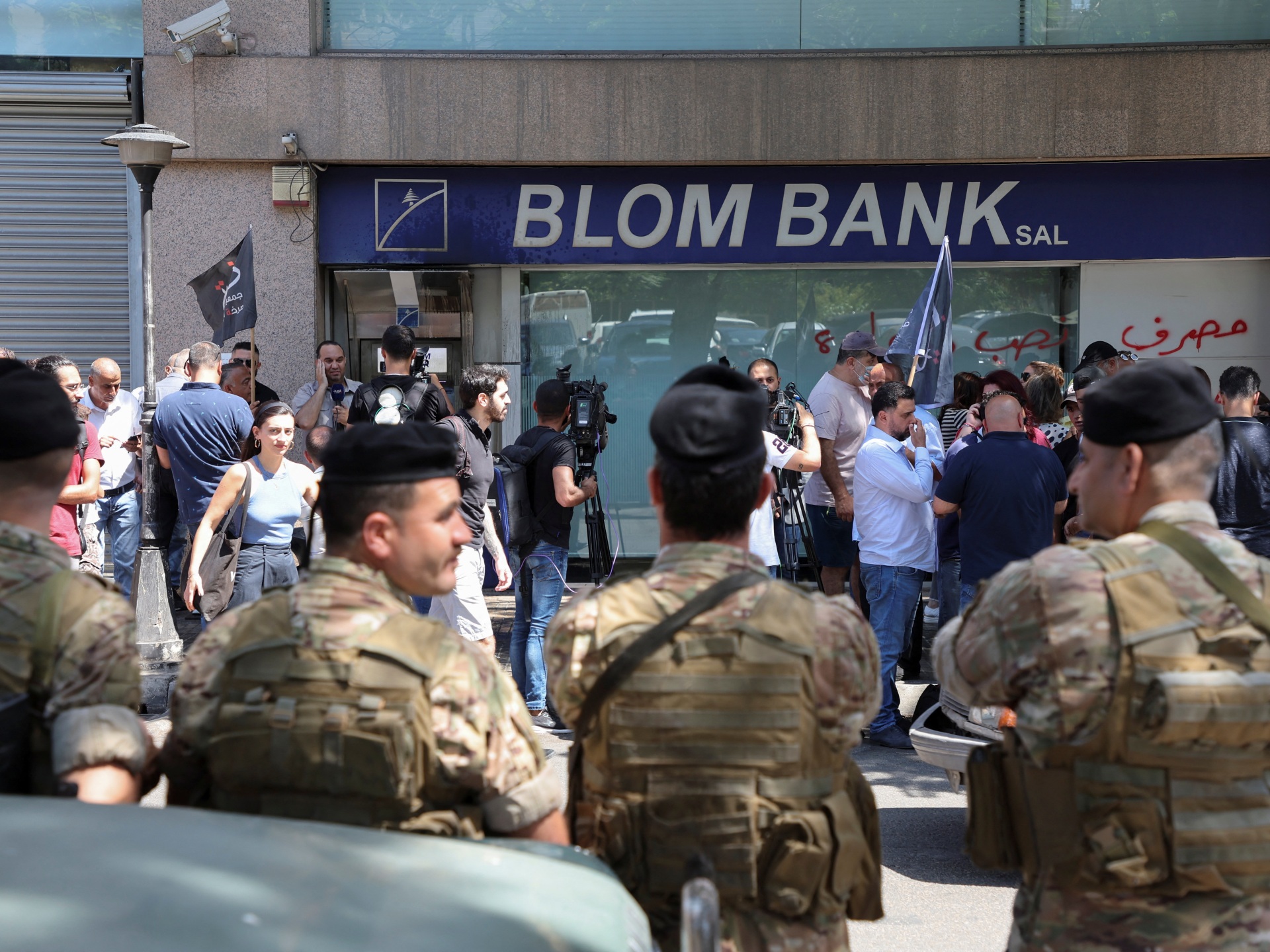 Lebanese banks to close next week after more branches are stormed

At least eight banks were held up by depositors in Beirut and other parts of country demanding access to their money.

Lebanese banks have said they will soon announce a three-day closure next week over mounting security concerns following a series of incidents involving people seeking access to their savings by entering banks armed with guns.

On Friday, eight banks were held up by depositors who demanded their own money, Al Jazeera’s Zeina Khodr reported, adding to a spate of holdups this week spurred by frustration over a spiralling financial implosion with no end in sight.

Lebanese banks have insisted that dollars be withdrawn only after being exchanged into Lebanese pounds at a vastly inferior rate to the black market, which is generally the rate used across the country.

A man with a gun that turned out to be a toy was arrested after holding up a Lebanese bank in the southern city of Ghazieh, a security source said.

Local Lebanese news said the man managed to obtain $19,200 from his deposits before handing himself over to the police.

Separately on Friday morning, an armed man entered a branch of BLOM Bank in the Lebanese capital’s Tariq al-Jdideh neighbourhood attempting to withdraw his money, the bank said in a statement, adding that the situation was under control.

The man, identified as Abed Soubra, was cheered on by a large crowd of people gathered outside – a scene that has played out in several such incidents.

“Abed is demanding his money, $275,000 in savings,” Khodr said, speaking outside the bank. “He is saying he can no longer survive and he is in debt and that he has a right to his money.”

Rabih Kojok, a local resident at the scene, said Soubra is a merchant and owes people money.

“What should he do? Go to jail because people need money from him while he has money in the bank? He’s in the right,” he said.

In a third incident, a man armed with a pellet gun entered a branch of LGB Bank in Beirut’s Ramlet al-Bayda area seeking to withdraw some $50,000 in savings, a bank employee said, adding the situation was continuing and that employees and customers were stuck inside.

According to Khodr, a union called the Outcry Association has declared war against the banks.

“That’s the words they are using,” she said. “They are promising that these incidents are going to happen over and over again.”

Friday’s incidents followed two others in the capital, Beirut, and in the town of Aley on Wednesday in which depositors were able to access a portion of their funds by force, using toy pistols mistaken for real weapons.

Last month, a man was detained after he held up a Beirut bank to withdraw funds to treat his sick father but was released without charge after the bank dropped its lawsuit against him.

Lebanon’s banking association urged authorities on Thursday to hold accountable those engaging in “verbal and physical attacks” on banks and said lenders themselves would not be lenient.

Banks said they will be closing on Monday, Tuesday, and Wednesday as a “precautionary measure”, Al Jazeera’s Khodr said.

Khodr added that the groups representing depositors believed this would work in their favour, as security service and other government personnel would also not be able to access their accounts while the banks were closed, potentially increasing the government’s urgency to find a solution.

Lebanon has been grappling with a severe economic crisis since 2019, leaving most people locked out of their bank accounts and unable to pay for basics.

For more than two-and-a-half years, Lebanon’s banks have imposed restrictions on depositors’ money in foreign currency, especially the US dollar. The banks have also set tight ceilings on withdrawing money in Lebanese pounds – which has lost 95 percent of its value since the onset of the crisis.

The capital controls were never formalised by law but courts have been slow to rule on depositors’ attempts to obtain savings via litigation against banks, leading some to seek alternative ways of getting their money.

The World Bank has described the crisis in Lebanon as among the severest since the mid-1800s.

Poverty in Lebanon has drastically increased during the past year and now affects about 80 percent of the population, according to a UN report.