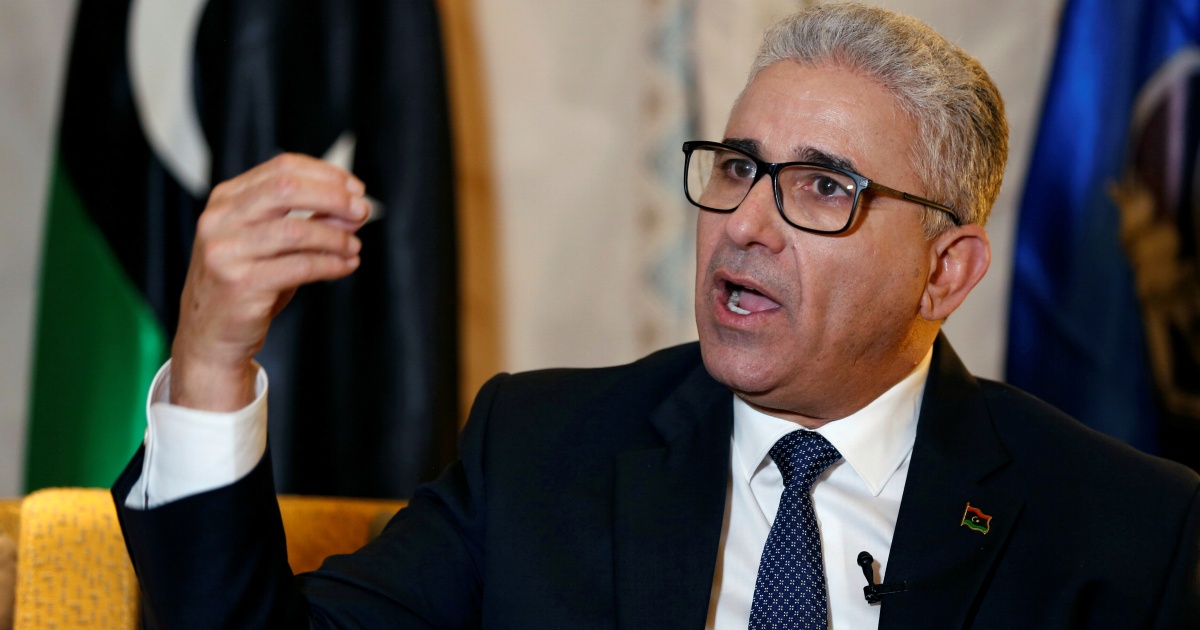 Fathi Bashagha, who was appointed prime minister by Libya’s east-based parliament in February, will base his government in Sirte from Wednesday, he said, after his attempts to take over the capital Tripoli triggered clashes.

Libya has had two governments since March. United Nations-recognised administration of Prime Minister Abdel Hamid Dbeibeh based in Tripoli has refused to cede power to Bashagha, saying his appointment by the Tobruk-based parliament is illegitimate.

Bashagha had briefly attempted to take over Tripoli on Tuesday morning before being forced out hours after his arrival, triggering fighting between opposing militias.

Bashagha entered Tripoli overnight after two months of deadlock between Libya’s rival administrations, but withdrew hours later as fighting rocked the capital “to preserve the security and safety of citizens”, his office said.

The sound of heavy weapons and automatic gunfire was heard across the capital on Tuesday morning, schools were cancelled, and the normally heavy rush hour traffic was sparse.

Fighting was reported in the al-Mansoura and Souq al-Thulatha areas of central Tripoli.

Khaled al-Mishri, the head of Libya’s High Council of State, condemned the violence and called for an immediate cessation of hostilities.

“We affirm that the only solution to the current political impasse is a clear constitutional process on the basis of which elections are held, and in which the Libyan people renew their authority, in a peaceful and transparent manner,” al-Mishri said.

The North African country has been riven by divisions since civil war broke out in 2014 between rival administrations based in the west and east of the country. That war ended in 2020, but splits have remained.

“What we need to understand is that in Libya, through a previous power-sharing agreement, there are two legislative houses,” said Al Jazeera’s Malik Traina. “There’s the parliament based in eastern Libya, and there’s the high council of state in the west.”

The two legislative bodies are supposed to agree on a new government to replace the unity government of Prime Minister Abdel Hamid Dbeibeh, Traina explained.

But the appointment of Bashagha raised eyebrows regarding the transparency of the process.

“There was a lot of scepticism with regards to how transparent the vote was and how legitimate it was,” Traina said. “Even the UN support mission voiced concerns that the vote of confidence in Bashagha was flawed.”

Many people view Bashagha as having aligned himself with strongman Khalifa Haftar, a military commander based in the east who launched a 14-month military offensive on Tripoli back in 2019.

“A lot of people see Bashagha as a traitor, who aligned himself with someone who has destroyed their homes and displaced hundreds of thousands of people,” Traina said.

“I’ve been talking to security officials and residents in Tripoli and what they’re telling me is really that this was a message to those that are supporting Bashagha: You can’t just come to Tripoli and assume power,” he added.

The UN special adviser on Libya, Stephanie Williams, called for calm and for rival parties to refrain from taking part in the clashes.

“Conflict cannot be solved with violence, but with dialogue and mediation,” she tweeted.

Williams added that the UN is ready to host all parties to help “Libya find a genuine, consensual way forward towards stability and elections”.

The US Department of State also said it is highly concerned and urged armed groups in Libya to refrain from violence, spokesperson Ned Price said.

Tuesday’s fighting came as talks between representatives of the rival administrations are in Cairo for a second round of talks. The meetings are facilitated by the UN in an attempt to get the two sides to agree on the constitutional basis to hold elections.

Bashagha, who like Dbeibah comes from the powerful coastal city of Misrata, has repeatedly said he would enter Tripoli without violence. His previous attempts to do so ended with his convoy blocked by rival factions.

Dbeibah has previously said he would only cede authority to a government that comes through an “elected parliament”, raising fears that the oil-rich country could slip back into a civil war.

Claudia Gazzini, senior Libya analyst at the International Crisis Group, said the development will likely have a “negative impact” on the current political landscape.

“As long as he [Bashagha] refrained from using violence to enter Tripoli by force, there was room for a negotiation between the two broad camps. But now that he has once again … tried to enter Tripoli and establish himself there … I think the patience of the Tripoli-based authority has run thin,” Gazzini told Al Jazeera.

It also means that the UN-recognised government will be less likely to “embark in talks, or accept talks”, she said. “They will be hardened towards Fathi Bashagha and his allies, and I think … the chances of Bashagha to claim that he will come to power … at this point, are dim.”

Gazzini also noted that it’ll be “a blow” to the UN-led talks taking place in Cairo.

Lawmakers have argued that Dbeibah’s mandate expired after Libya failed to hold presidential elections in December as planned under a UN-brokered agreement.

The failure to hold the vote was a major blow to international efforts to end a decade of chaos in Libya. It opened a new chapter in Libya’s long-running political impasse, with rival governments claiming power after tentative steps towards unity in the past year.

The impasse has already led to a partial blockade of Libya’s oil facilities, cutting its main source of foreign revenue by half. Diplomacy to resolve the crisis or lay the ground for new elections is making slow progress.

The oil-rich country has been racked by conflict since a NATO-backed uprising toppled and killed longtime leader Muammar Gaddafi in 2011.

The vacuum left behind by Gaddafi led to the emergence of militias across the country, which have vied for power and control of the country’s resources.