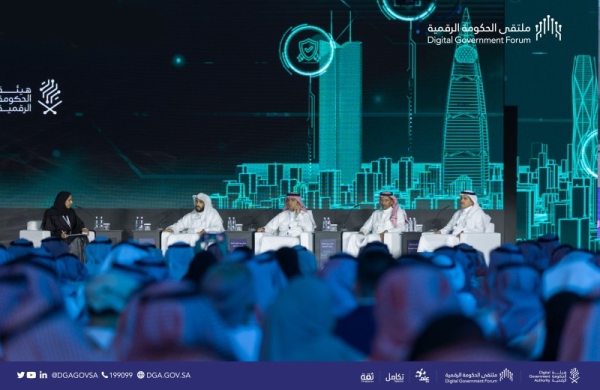 During the forum, Governor of Digital Government Authority (DGA) Eng. Ahmed Al-Suwaiyan said two additional indicators will be launched in 2023: Improving the government digital content and The future and its foresight.

Al-Suwaiyan said they are looking forward to unifying shared services, as unified access must be one for all government platforms and websites. In addition to that the government payment channel must be one, he said, noting that their goal for 2025 is a 75% compliance rate.

Unifying interface designs, whether for digital platforms, websites or even mobile applications, is one of the targets in Saudi Arabia, so that the beneficiary gets the same experience, Al-Suwaiyan said, noting that they aim to reach 80% commitment in 2025.

Al-Suwaiyan confirmed that among the goals of digital transformation in Saudi Arabia is to have better services and fewer digital platforms, and this can be achieved by reducing the number of digital platforms by 50%, to 409 by 2025 from 818 in 2021.

During the forum, Al-Suwaiyan also revealed the contributions of various ministries and government agencies in Saudi Arabia to achieve digital transformation goals. He mentioned that the Ministry of Health has provided consultations services through the Seha virtual hospital, the biggest of its kind in the world, as it links more than 152 hospitals around Saudi Arabia.

The virtual hospital not only offers consultations, but also carries out remote surgeries — tele surgeries. The hospital performed 13 remote heart surgeries, while the time required for intervention in stroke cases cut down to 33 minutes.

As for the Ministry of Justice, 95% of judicial sessions were provided online, while more than 18 million annual visits to judicial facilities were dispensed with.

Al-Suwaiyan said that the litigation period has been reduced by about 86% in the personal status courts, from an average of 219 days to 30 days.

As for the contributions of the Ministry of Municipal and Rural Affairs and Housing, it has provided more than 190 e-services, through which it meets over 60% of the digital needs of the municipal sector customers through the Baladi platform.

Al-Suwaiyan indicated that the ministry's digital efforts contributed to a decrease in rental cases by about 50%, as the rental contracts are documented through the Ejar platform.

The Ministry of Interior succeeded in dispensing with more than 160 million visits annually to its offices through the use of the Absher platform.

The ministry has also made SR17 billion in annual savings not only for government agencies, but also for beneficiaries, Al-Suwaiyan said, stressing that in the past, the process of providing a service took about 4 hours, but now it is implemented in only 3 minutes.

As for the labor sector, the contributions of the Ministry of Human Resources and Social Development (MHRSD) resulted in the issuance of more than 1 million work visas, in addition to over 500,000 work permits through the Qawia platform in 2021.

He also referred to the great impact digital transformation had on the charity sector. The National Platform for Charitable Work (Ehsan) has collected over SR2.6 billion in donations, with more than 4.8 million people benefiting from the aid.

Regarding the efforts of the Ministry of Finance, the Zakat, Tax, and Customs Authority (ZATCA), and the National Center for Government Resources Systems (NCGR), Al-Suwaiyan said previously, the average cycle of payment procedures took 180 days, but today it takes only 28 days, and this represents 84% efficiency. He said the commitment of establishments to the e-billing system reached 92% within a very short period.

The Saudi ministries have also participated in the Digital Government Forum and revealed their achievements in digital transformation.

The ministry aims to improve the urban landscape and the services that are provided to the Saudi citizens and residents, he said, noting: "If we did not benefit from the technologies, we will never be able to achieve any of our targets."

Justice Minister Waleed Al Samaani pointed out that 7 years ago, 15% of judicial services were provided digitally, but now more than 90% of the ministry's services are being provided online.

On his part, Minister of Transport and Logistics Saleh Al-Jasser said his ministry has an integrated path for digital transformation. It includes several initiatives to develop the services and raise work efficiency, in addition to providing a distinguished experience for the beneficiaries.

He noted that the taxis were only available in 8 main cities, but now thanks to digital technologies, it is available in more than 100 cities and towns in Saudi Arabia.
Add Comment