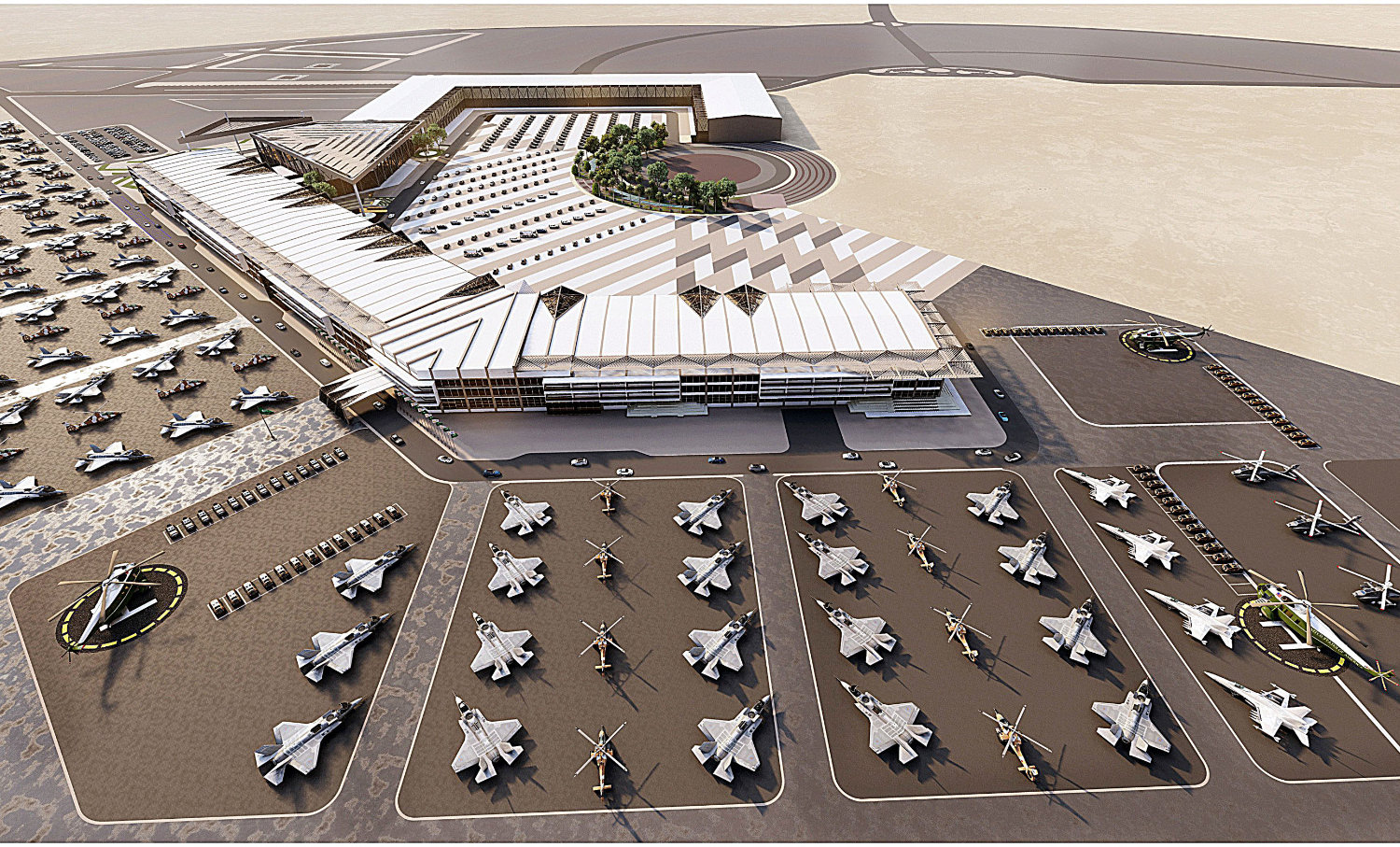 The United States and Saudi Arabia have an established relationship in terms of security, with more than SR375 billion ($100 billion) in active foreign military sales that President Joe Biden can build on during his visit to the Kingdom.

According to the US Embassy and Consulates website in Saudi Arabia, the two countries have developed consultations on the Middle East peace process, Gulf interests, and international economic and development issues.

As the US’ most significant FMS customer, the Kingdom committed SR88.9 million in early 2022 on advanced weapons sales to upgrade its missile defense systems. 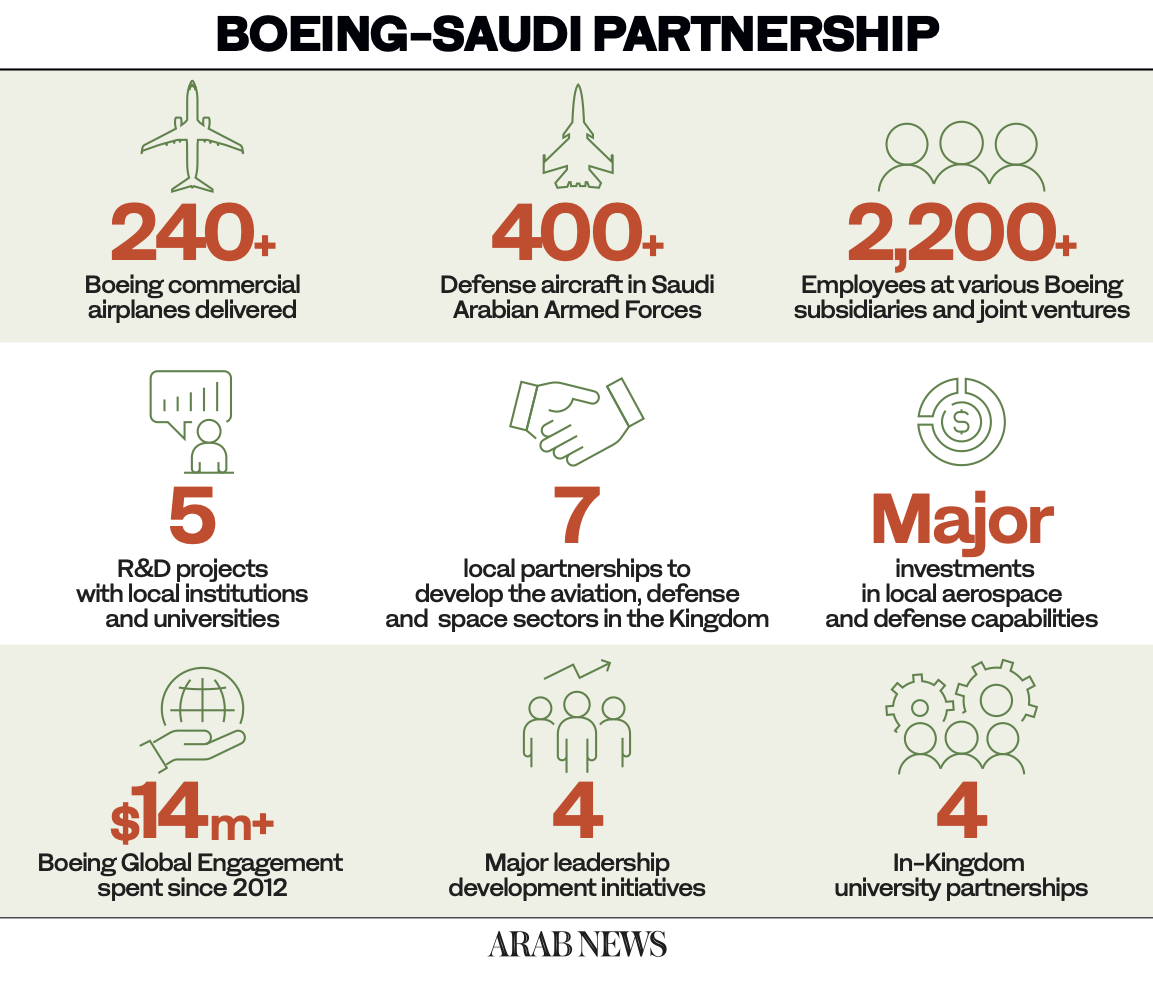 The purchase will include 31 Multifunctional Information Distribution System-Low Volume Terminals.

This deal came after the US State Department approved the potential sale of 280 AIM-120C air-to-air missiles in November 2021, valued at up to SR2.4 billion. In the wake of bumps on the road, US-Saudi relations are being reset with new military sales deals from the Kingdom.

The November sale was the first major foreign military sale to the Kingdom by the Biden administration since taking office and adopting a policy of selling only defensive weapons to the Gulf ally.

SR1.87 billion was the first military sale made under the Biden administration in September 2021, reported CNN. 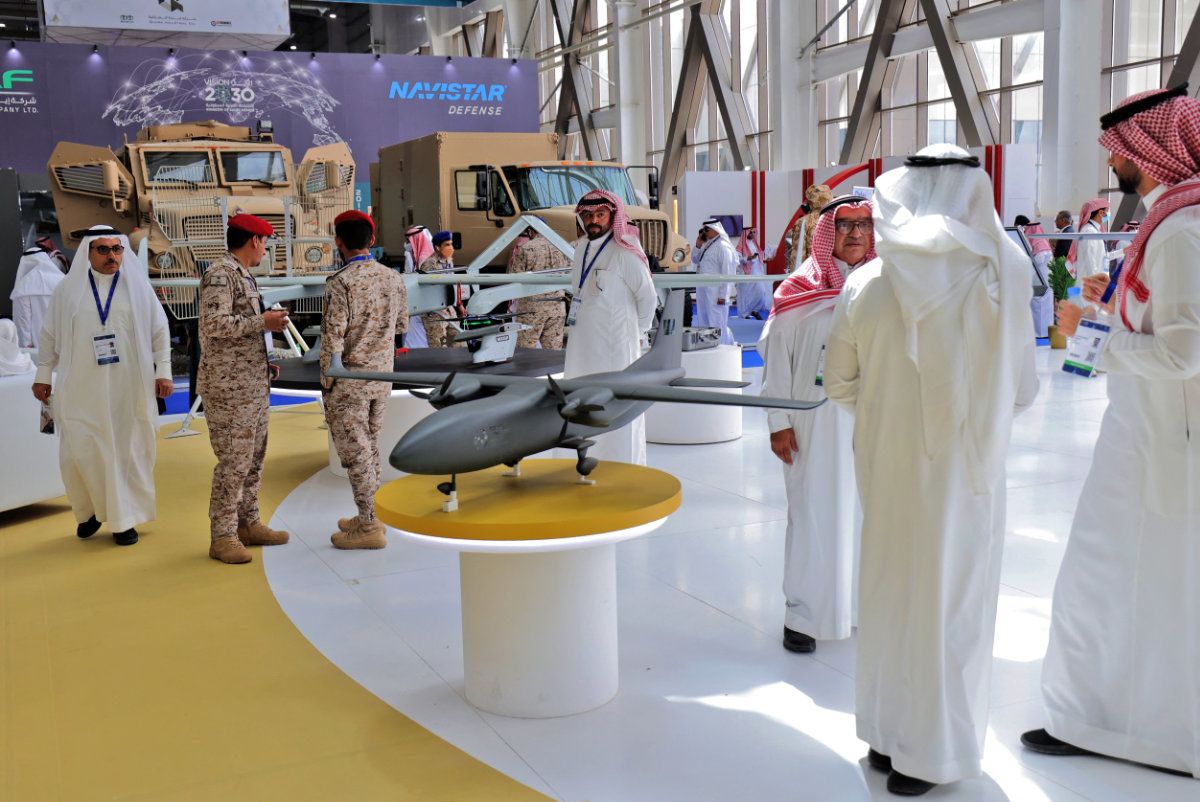 Another notable development that cemented the US-Saudi defense ties was Lockheed Martin’s space technology partnership with the Kingdom.

Joseph Rank, CEO of Lockheed Martin in Saudi Arabia and Africa, told Arab News on the sidelines of the World Defense Show in Riyadh that it is the only US company that has sold the Kingdom a military satellite to provide secure communications.

In addition to its aerospace, arms, and information security divisions, the Washington-based company has a separate division for space. 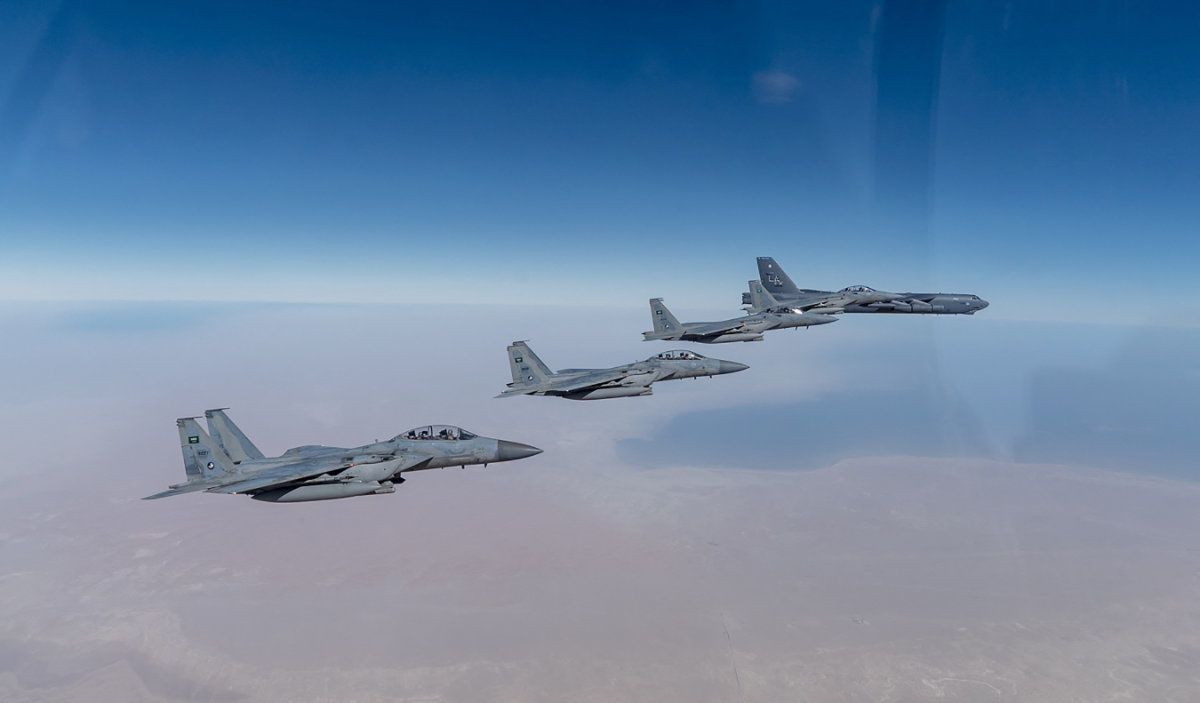 A US Air Force B-52 Stratofortress flies with Saudi F-15SAs during a bomber task force mission in the Gul area on Jan. 27, 2021.

As part of the Kingdom’s ongoing efforts to localize 50 percent of its military spending by 2030, Lockheed Martin completed two deals with its military regulatory body at the WDS in Riyadh in early 2022.

“What’s exciting about this is that it gives the Kingdom the world’s most advanced missile defense system, which will keep it safe from the increased threats that we see around the region and the world,” said Rank.

He warned that today and tomorrow’s threats will be drones and missiles coming into the Kingdom, “so the focus of our efforts is to help them enhance their defense.”

Rank explained that this is being done with digital counter missiles, counter-drone systems, and a critical command and control system that will be produced mainly in the Kingdom and maintained by Saudis. It will be “a sovereign and commercial system, not subject to export approvals.”

According to the Lockheed Martin executive, the growth is driven by Saudi Arabia’s need to defend itself from threats. Since the Kingdom is one of the largest consumers of defense equipment, “it only makes sense for them to produce their systems locally.”

It is working with GAMI and the Saudi Arabian Military Industries to build capability and capacity in the local industry. According to Rank, the 50 percent requirement was “challenging,” but it was what they “signed up to do.” 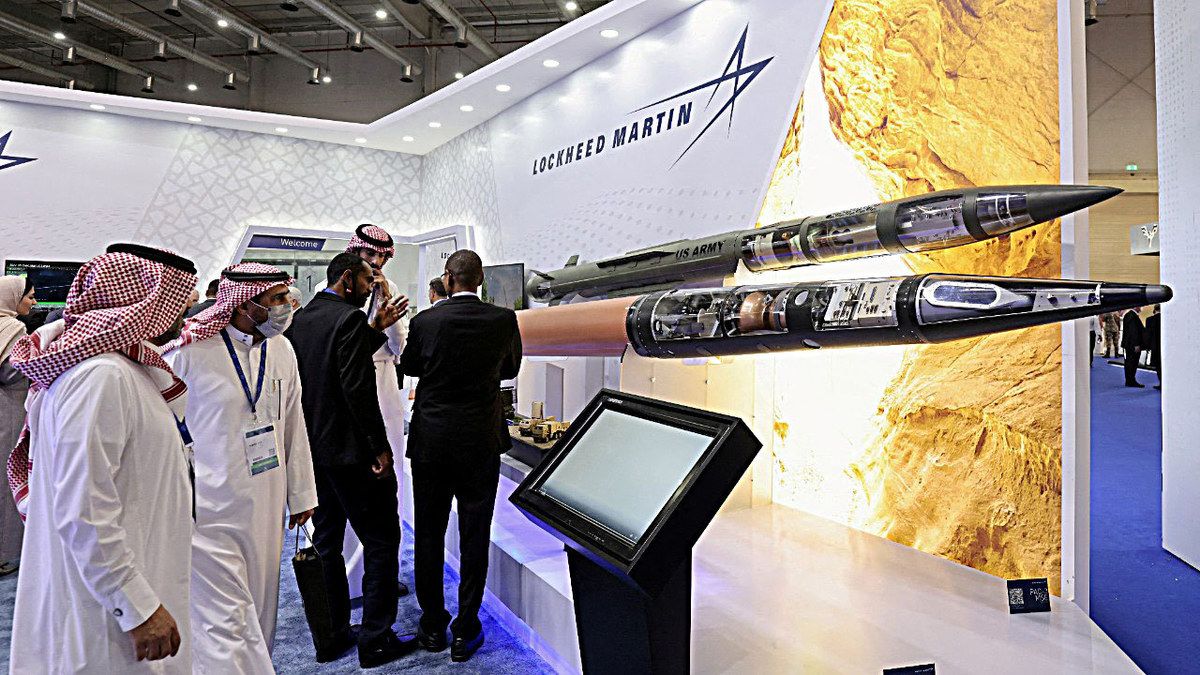 The Saudi Arabian Military Industries has partnered with multinational firm such as Lockheed Martin in developing the Kingdom's weapons industry.

Aside from providing training, spare parts and technical expertise for all the systems they sell to the Kingdom, he said Lockheed Martin is also an official partner with GAMI’s academy.

“The academy will initially start as a vocational-technical school to help teach young Saudis how to handle complex defense and mechanical challenges, and they will teach them how to sustain, repair and eventually design their systems,” Rank added.

He also said that Lockheed Martin started internship programs at Saudi universities “to create an ecosystem of R&D on campuses.”

The US also has a well-entrenched relationship with the Royal Saudi Air Force, which began with the purchase of the Kingdom’s initial F-15C/D fleet in 1978, according to a statement by Boeing.

After the Gulf War in the early 90s, the RSAF acquired additional F-15C/Ds, followed by F-15S Strike Eagles, to enhance its capability with one of the most advanced multi-role platforms in the world.

A foreign military sales agreement signed in December 2011 between the Kingdom and the US included F-15SA fighter jets, AH-64E Apache attack helicopters, AH-6 light attack/armed reconnaissance helicopters, Harpoon missiles, Joint Direct Attack Munitions, and Small Diameter Bombs, as well as associated support and training. This was, according to Boeing, the largest agreement in US history. 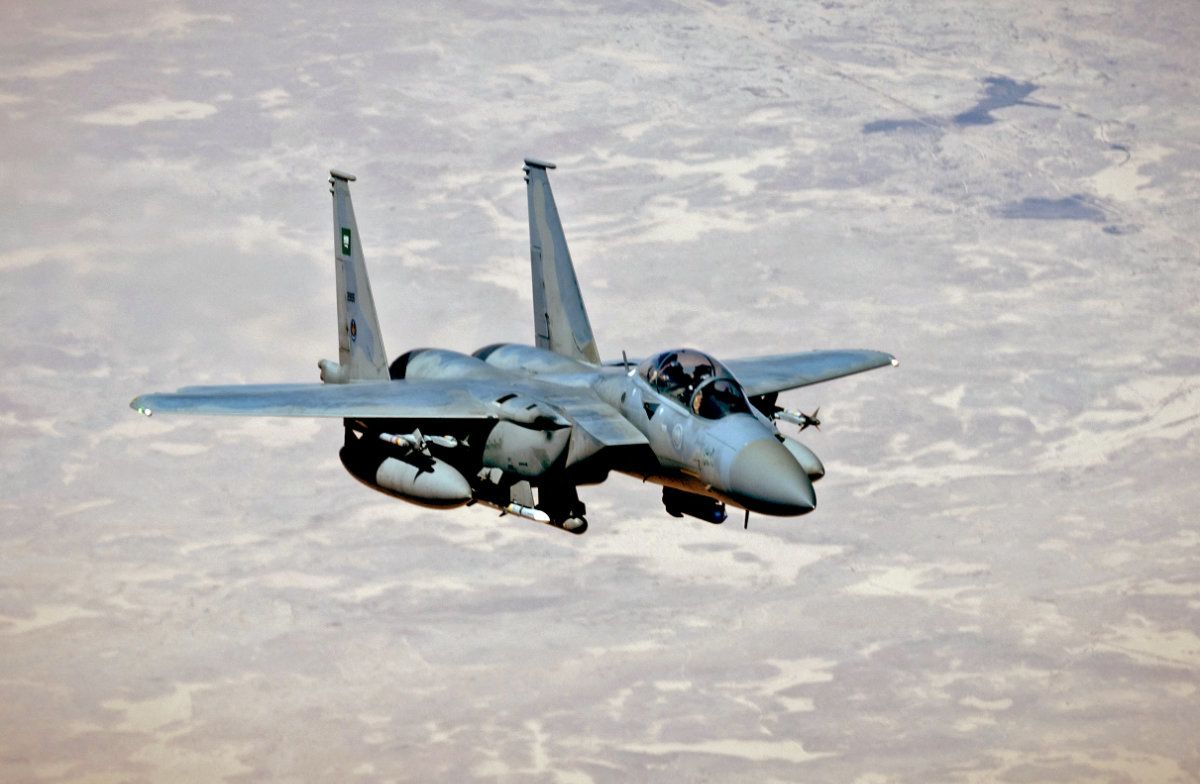 US F-15 fighter jets, manufactured by McDonnell Douglas, which is now part of Boeing, are the mainstay of the Royal Saudi Air Force.

Boeing and SAMI signed an agreement in 2022 to form a Kingdom-focused joint venture to provide maintenance, repair, and sustainment services for the country’s rotorcraft platforms.

Boeing has provided the Saudi Arabian Armed Forces with over 400 defense aircraft during its 77-year partnership with the Kingdom. Boeing’s investment also aims to develop the Kingdom’s aviation, defense, and space sectors through seven local partnerships.

The Ministry of Defense may receive more support due to Biden’s planned visit to the Kingdom to discuss both countries’ relationship with Crown Prince Mohammed bin Salman. 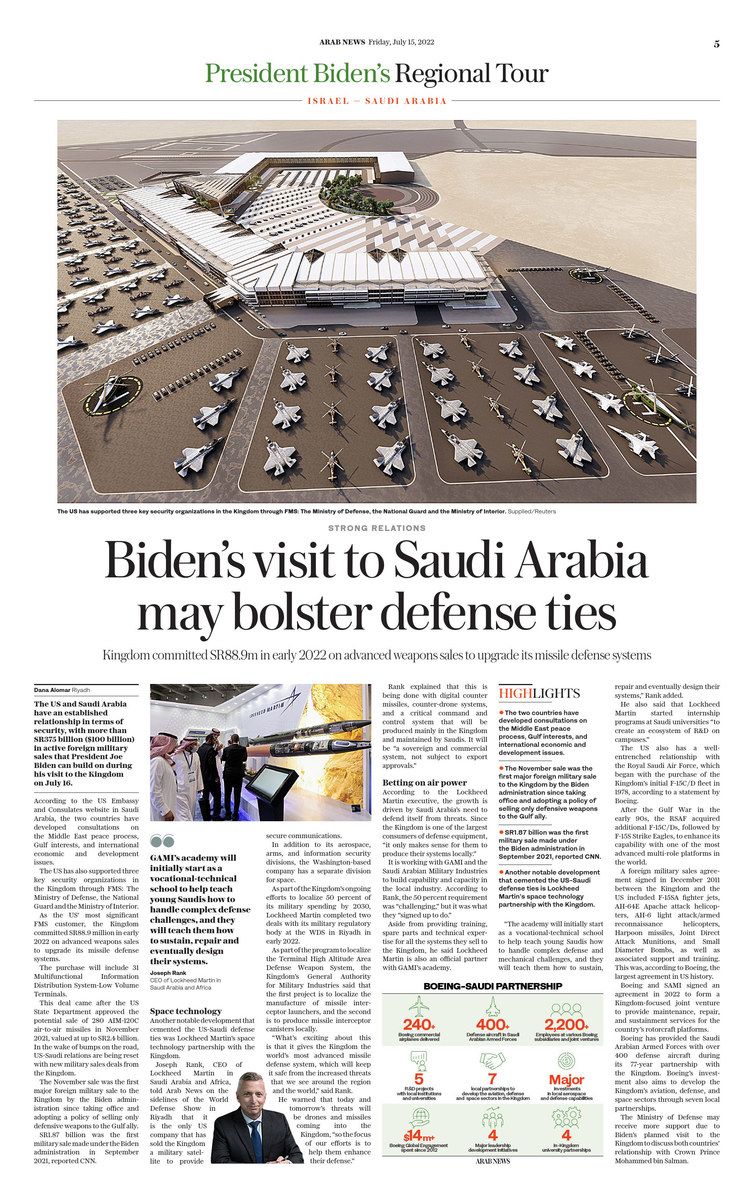