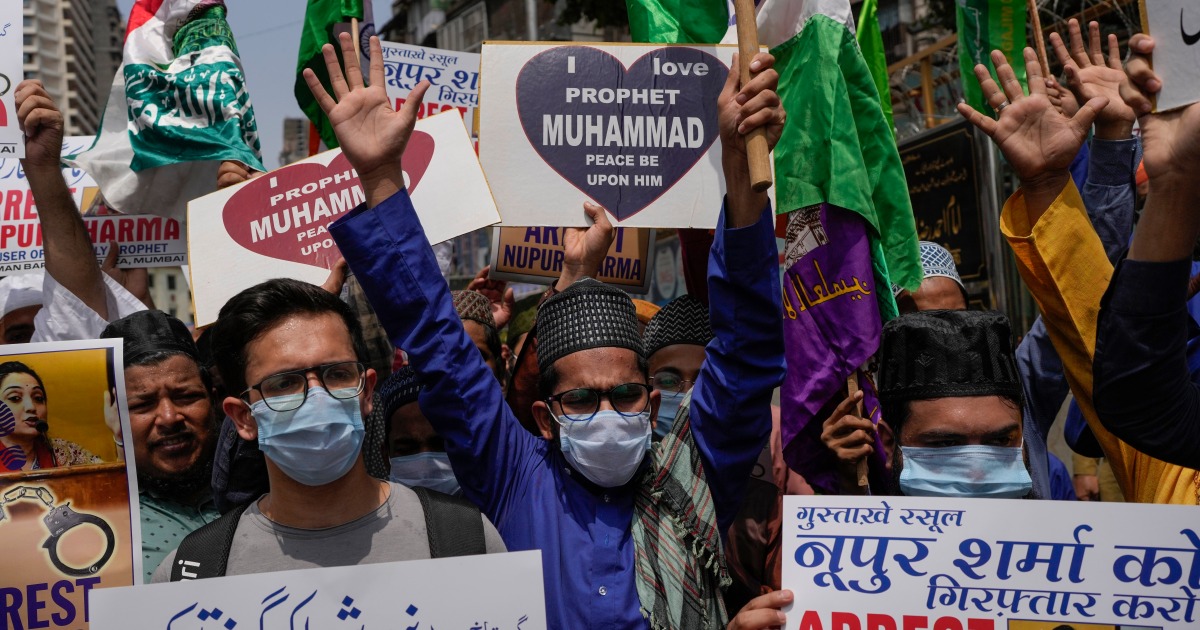 Doha says it expects ‘public apology’ from the Indian government over comments made by two BJP members against Prophet Muhammad.

International backlash is growing against India after a ruling party official made Islamophobic comments during a televised debate, with Qatar and several other Muslim nations lodging official protests against New Delhi and demanding a “public apology”.

At least five Arab nations have lodged official protests against India, and Pakistan and Afghanistan also reacted strongly on Monday to the comments made by two members of Prime Minister Narendra Modi’s Bharatiya Janata Party (BJP).

Anger has poured out on social media, and calls for a boycott of Indian goods have surfaced in some Arab countries. Al Jazeera TV on Monday reported that Indian products were removed from shelves in some shops in Kuwait.

The criticism from Muslim countries had been severe, indicating that insulting Prophet Muhammad is a red line.

The anger has been growing since last week after the two BJP members – national spokeswoman Nupur Sharma and Delhi BJP staff Naveen Jindal – made remarks that were seen as insulting Prophet Muhammad and his wife Aisha.

Modi’s party took no action against them until Sunday when a chorus of diplomatic outrage began with Qatar and Kuwait summoning their Indian ambassadors to protest.

In a statement, Qatari Minister of State for Foreign Affairs Soltan bin Saad Al-Muraikhi said “these insulting remarks would lead to incitement of religious hatred, and offend more than two billion Muslims around the world”.

Doha is expecting “a public apology and immediate condemnation of these remarks” from the Indian government, said the statement, which came as India’s Vice President Venkaiah Naidu visited the wealthy Gulf state on Sunday in a bid to bolster trade.

In a tweet, Qatar’s Assistant Foreign Minister Lolwah al-Khater said: “The Islamophobic discourse has reached dangerous levels in a country long known for its diversity and coexistence. Unless officially and systemically confronted, the systemic hate speech targeting Islam in India will be considered a deliberate insult against two billion Muslims.”

Kuwait warned that if the comments against Prophet Muhammad go unpunished, India would see “an increase of extremism and hatred”.

The grand mufti of the sultanate of Oman described the “obscene rudeness” of Modi’s party towards Islam as a form of “war”. And Saudi Arabia said the comments were “insulting” and called for “respect for beliefs and religions” as it and Iran lodged complaints with India.

The Jeddah-based Organisation of Islamic Cooperation (OIC) said the remarks came in a “context of intensifying hatred and abuse toward Islam in India and systematic practices against Muslims”.

India’s foreign ministry on Monday rejected comments by the OIC as “unwarranted” and “narrow-minded”.

The anti-Islam remarks also led to anger in India’s archrival and neighbour Pakistan and in Afghanistan.

On Monday, Pakistan’s foreign ministry summoned an Indian diplomat and conveyed Islamabad’s “strong condemnation”, a day after Prime Minister Shehbaz Sharif said the comments were “hurtful” and that “India under Modi is trampling religious freedoms and persecuting Muslims”.

The Taliban government in Afghanistan said India should not allow “such fanatics to insult … Islam and provoke the feelings of Muslims”. 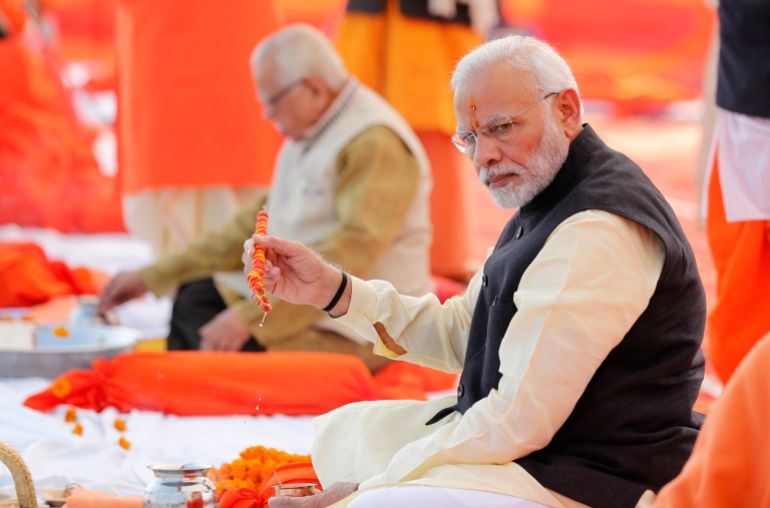 Anti-Muslim sentiments and attacks have risen across India under Modi

‘Too little, too late’

India’s embassy in Qatar released a statement on Sunday, saying the views expressed against the Prophet and Islam were not that of the Indian government but were made by “fringe elements”.

The statement said strong action had already been taken against those who made the derogatory remarks.

In another statement, India’s foreign ministry on Sunday said the offensive tweets and comments did not, in any way, reflect the views of the government.

As anger in Gulf states grew, the BJP suspended Sharma and expelled Jindal for hurting the religious sentiments of Muslims who make up about 14 percent of India’s 1.35 billion people.

Reporting from New Delhi, Al Jazeera’s Pavni Mittal said the BJP members’ remarks put India in a “very embarrassing position” and that the Indian government is attempting “damage control”. But critics say the actions are “too little, too late”.

“And that goes back to a history of its (BJP’s) top leaders making inflammatory, anti-Islamic and anti-minority comments openly, and getting away with it pretty easily,” Mittal said.

“A few months ago, there were leaders that called for genocide and violence against Muslims in public meetings, and rights groups that pointed this out in reports have been met with a lot of resistance. In fact, they saw their offices either shut or foreign funding frozen.”

Protests were held on Monday against the anti-Muslim remarks in the financial capital Mumbai and other Indian cities, while dozens of people were arrested for rioting in the northern city of Kanpur. 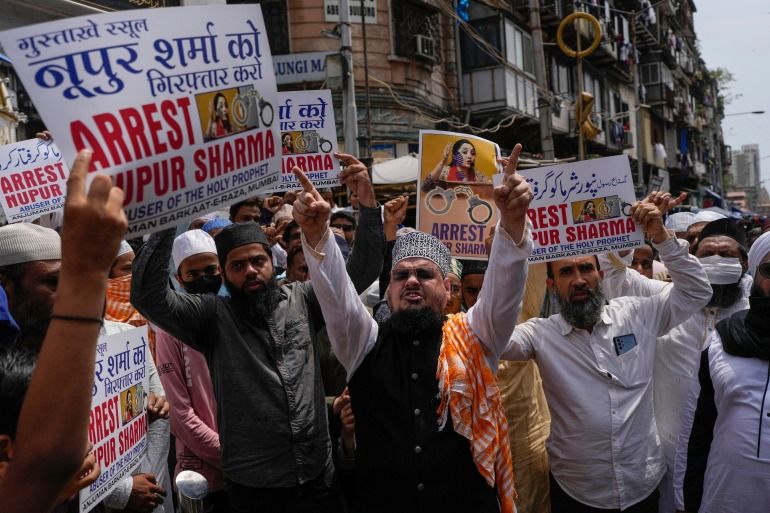 Former Indian diplomat Vivek Katju told Al Jazeera he was “shocked” by the comments on Islam’s prophet “because that is not in keeping with what I have grown up with – that no religious personality or faith be denounced”.

India’s old ties with the Gulf

The remarks made by Sharma during a TV programme and Jindal in a now-deleted tweet risk damaging India’s strong relations with many Arab nations.

Many Gulf states rely on millions of migrant workers from India and elsewhere in South Asia to serve their tiny local populations and drive the machinery of daily life.

In recent years, Prime Minister Modi has strengthened economic ties with the energy-rich nations, the top source for the country’s fuel imports.

A senior official at the Qatari embassy in New Delhi said Modi’s government must publicly distance itself from the comments.

“Hurting our religious sentiments can directly impact economic ties,” the official said, adding they were checking reports about a boycott of Indian goods by some supermarket owners in Qatar.

Katju, the former Indian diplomat, said there is a “mutuality of interest between India and the Gulf”.

“And that interest is shown in the growing relationship between India and the Gulf states. I don’t see that is going to go away because of this incident,” he told Al Jazeera.
'Hindutva pop': The singers producing anti-Muslim music in India

Anti-Muslim sentiments and attacks have risen across India under Modi as Hindu nationalists feel emboldened by his regular silence on such attacks since he was first elected in 2014.

Over the years, Indian Muslims have been often targeted for everything from their food and clothing to inter-religious marriages and places of worship.

Watchdog groups such as Human Rights Watch and Amnesty International have warned that attacks could escalate, while a leading expert on political violence earlier this year said India is on the cusp of a genocide of Muslims.

Rights groups have accused the BJP of looking the other way and sometimes enabling hate speech against Muslims. Modi’s party denies the accusations, but India’s Muslims say attacks against them and their faith have become relentless.

More recently, religious tensions have escalated after some Hindu groups went to a court in the northern city of Varanasi to seek permission to pray at a 17th-century mosque, claiming that it was built by demolishing a temple.

Critics say these tensions have been further exacerbated by India’s TV channel anchors during raucous debates. The BJP’s Sharma had made the comments against Prophet Muhammad during one such debate.