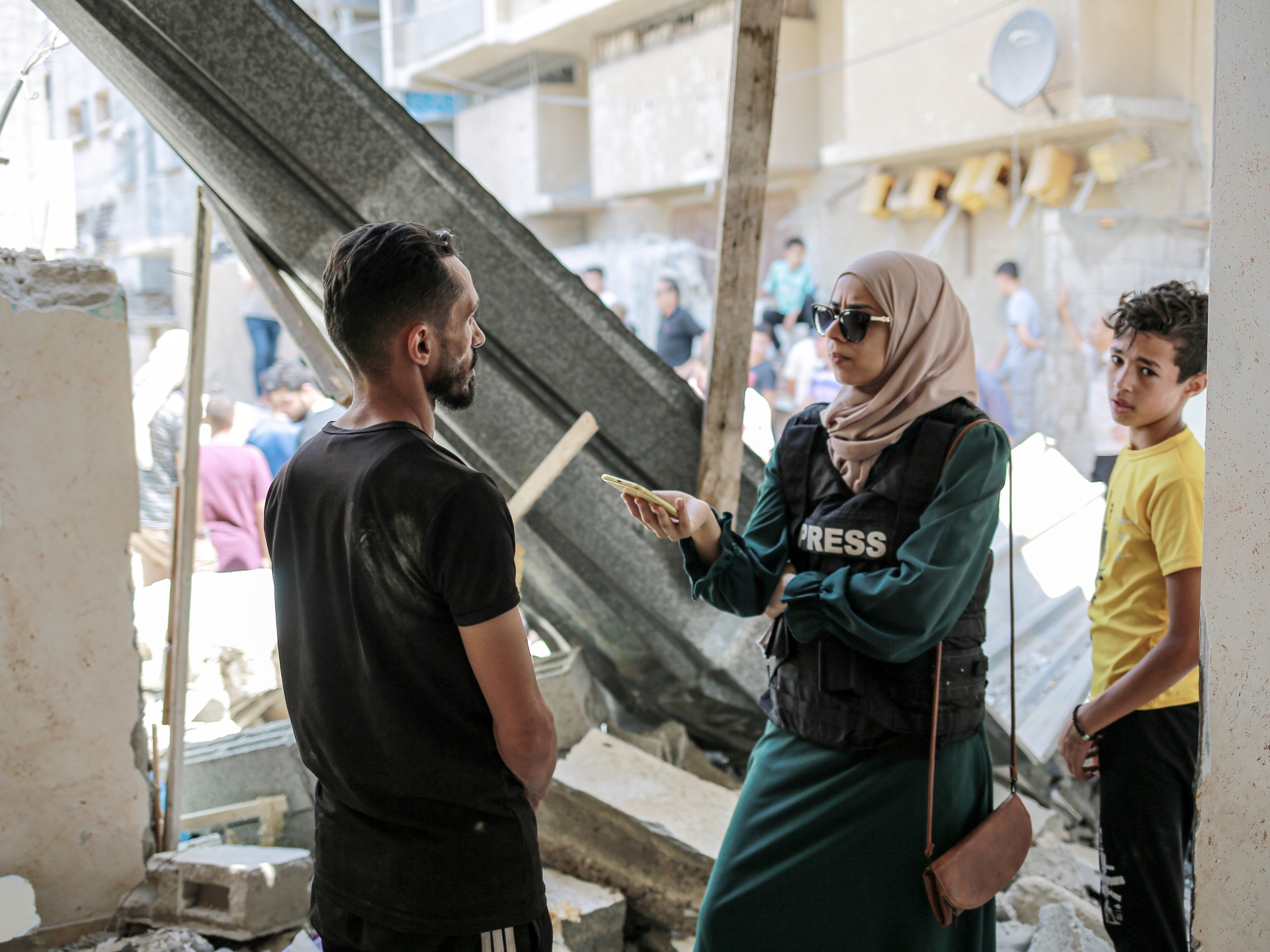 Life in Gaza has a recurrent theme, one of repetitive hardships, without the prospect of any improvement, writes Maram Humaid.

“What are your wishes for the New Year?”

It is a typical question, but you do not ask it in the Gaza Strip.

If you did, you would open yourself up to strange or angry looks, or someone might think you were making fun of them.

So instead, I have asked the question to myself.

I am a journalist, but I am from Gaza; I have lived through its daily reality, its hardships, and its challenges.

Being a journalist here is a heavy burden.

You report news that can leave you despondent, but it is news that has been repeated for more than 15 years, since the beginning of the Israeli blockade of Gaza, about an ongoing human tragedy that my fellow Gaza Palestinians live through.

We have been writing about the same issues, the same circumstances, the same news of military escalations, and the same suffering, without anything changing.

Does this mean that the lives of the two million people living in Gaza are worthless?

Many Palestinians in Gaza are struggling to deal with the continued suffering and have lost the desire to talk and be interviewed.

Their answers to my questions always begin with the same response: “What are we going to say? Nobody hears or feels us.”

Gaza was not spared a military attack last year.

It is a bloody scenario that keeps repeating itself, and only serves to worsen conditions in a territory that has already collapsed economically, environmentally and politically, an area the United Nations once predicted would be “uninhabitable” by 2020.

When I think back to the three days of the Israeli attack in August, I remember many painful stories of grief and loss.

I do not know how Umm Khalil Hamada would look forward to the New Year without the only child she gave birth to after 15 years of trying to conceive.

How about 11-year-old Rahaf Suleiman, who lost her hand and feet after an Israeli bombing?

How will the people of Gaza forget all this sorrow, sadness and bitterness? How do they carry on knowing that the truce that hangs over them could collapse at any time, with no political solution in sight? How, how, how?

In Gaza, a round of conflict may end, but people feel like they are living through a daily war. A fierce war fought against closed border crossings and travel restrictions, against high unemployment rates, against extreme poverty, and against daily power cuts.

One of the main effects of living in Gaza arises when seeking medical treatment.

During the past year, my mother suffered from pulmonary complications after being infected with COVID-19 twice. Her condition began to deteriorate significantly, and the doctors in Gaza, with their limited resources and dilapidated health system, could not help.

In Gaza, in this case, the best option is to think about treatment in Israeli hospitals. This, however, involves several hurdles: submitting medical reports, requesting a medical referral, security permits, and papers from a human rights organisation to prove that the case is humanitarian.

The Civil Affairs Department is where you go to when you are applying to travel through the Israeli-run Beit Hanoon crossing, known as Erez to Israelis.

Of course, we were not alone. There were tens, if not hundreds, of citizens who were crowding into the building to apply for medical treatment in Israel.

A state of great despair and helplessness afflicted everyone desperately waiting for a permit. Frowning faces covered with sweat, tiredness and anxiety, waiting for an answer that would usually involve a long list of security conditions, and most probably a rejection.

After weeks of waiting and trying, my mother’s request was approved by the Israeli hospital.

But the Israeli authorities refused to give her a permit to pass Erez. No reason was given.

In general, Israel says these measures are necessary for security reasons, but for Palestinians in Gaza, it feels like just another way to punish the population.

So, we turned to our other option – the Rafah crossing, and Egypt.

It is worth mentioning that the journey through the Rafah crossing is known as “a piece of torment”, as travellers spend long hours waiting on the Egyptian side, before passing through Egypt on a road that takes several hours, punctuated by checkpoints for travellers.

The distance between Rafah and Cairo should not take more than six hours, but with restrictions, it takes longer than 20 hours.

Eventually, my mother made it to Turkey, where the realisation of what life could be like outside of living under a blockade in Gaza.

In video calls, she expressed her sorrow for her children, for the young people who will have to live through what she described as the “cemetery” that is Gaza.

My mother told us that she had been facing death in Gaza, without medical treatment. After she was able to travel and go to Turkey, she had come back to life.

Our conversations would end when our power was cut.

It would leave me thinking about our situation, our reality, and the deterioration of our quality of life.

How do Palestinians in Gaza deal with this? And why is the idea of normal life a mere dream for them?

I do not have answers to these questions, but, with no hope of a resolution in sight, everyone in Gaza I speak to believes that what is yet to come will be even worse. The thinking is that if you are optimistic, you are only setting yourself up for disappointment.

In Gaza, people cannot stop talking about what they predict to be the inevitable explosion of the situation, another devastating war that most think will ultimately arrive one day.

And yet, the general sense is one of worrying ambivalence.

“If it happens, will it be worse than what we have lived through?” is the common refrain. “Then there’s no difference with what we’re already living through.”