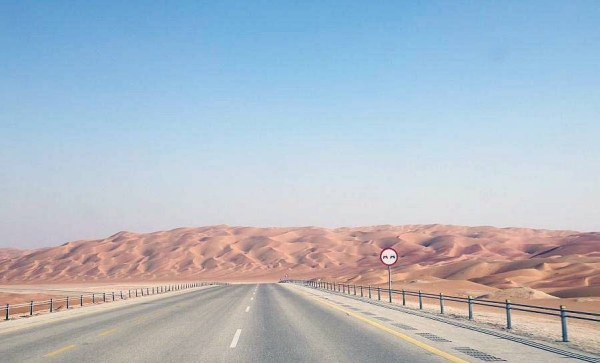 The 564-kilometer road connecting the Kingdom of Saudi Arabia with the Sultanate of Oman has been inaugurated from Al-Bathaa Intersection to the Empty Quarter on the Saudi-Omani borders with a total cost of SR1,907,570,000.

The road connecting the two countries is considered an engineering wonder that was implemented by the Ministry of Transport and Logistic Services, due to the difficult terrain and weather in the Empty Quarter area.

It is also considered one of the most important projects that the ministry sought to realize for its importance in enhancing commercial exchange and facilitating the movements of pilgrims and tourists.

Minister of Transport and Logistic Services Eng. Saleh Al-Jasser stressed Saudi Arabia’s keenness to do whatever that can enhance cooperation with Arab countries, noting that this new road opens wide prospects to enhance commercial exchange between Saudi Arabia and Oman, transport movement in a way that serves pilgrims and Umrah performers from Oman, in addition to serving the tourism and trade movements.

The road was also provided with all traffic safety means, including lighting the last part of the road with a total length of 30 kilometers to facilitate motorists’ movement on the road.

The Zakat, Tax and Customs Authority at the Empty Quarter port connecting Saudi Arabia and Oman Wednesday started providing the services for travelers to and from the Kingdom, and facilitating truck and vehicle movement procedures, after the official announcement of the phased inauguration of the port.