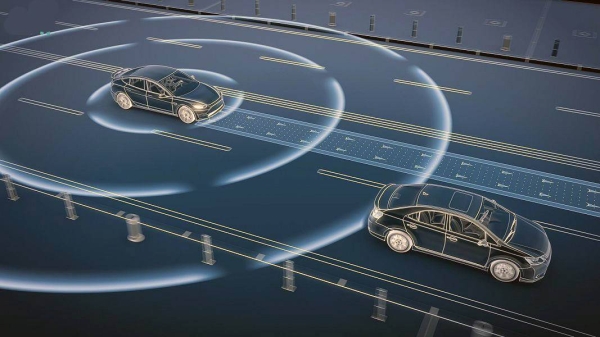 Autonomous vehicles will be commercially available in world by 2030

Artificial intelligence (AI), with its various technologies, has become one of the most important pillars of life in the present and indispensable reality in the future of humanity in light of what we are witnessing of renewable technological development in all walks of life.
This is due to the outcomes of the fourth industrial revolution of technologies that penetrated the most accurate details of the human life and created a new modern lifestyle that barely looks like life two decades ago. These technologies in AI offered magnificent practical and scientific outcomes, saved time and facilitated the use of some technologies for man.

It will not be a fiction in Saudi Arabia during the next few years if one sees a self-driving vehicle that understands traffic signs without any human intervention, where this technology is known as “autonomous vehicle” that uses AI tools.

Human societies are living a transitional phase from the industrial economy to the economy that is identified by a new set of technologies belonging to digital technology and nanotechnology, as the UN noted in a report on its website.

Society of Automotive Engineers (SAE International) has identified the levels of autonomous vehicles between 0 and 5, where some countries currently has some kinds of electric cars that use self-driving technologies at levels up to the level 4, where major automobile manufacturers in the world seek to reach Level 5, which marks full autonomous vehicles without any human intervention.

SAE International, in an electronic issue for the Saudi Data and AI Authority (SDAIA), and was seen by the Saudi Press Agency (SPA), said that the motorist drives the vehicles from levels 0 to 2 upon activating driver support features even if they do not steer vehicles and their feet are away from gas pedals. This is in addition to supervising supporting features steering direction and controlling speed according to need to preserve safety.

In a related context, Lucid Motors for electric cars has recently announced signing an agreement to establish its first factory in Saudi Arabia with a production capacity of 155,000 cars annually, where the Kingdom expressed commitment to buy 50,000 electric cars and the possibility to buy additional 100,000 cars through the next 10 years, where it is expected to start delivering electric cars of the factory in the Saudi market during the second quarter of 2023.

This step is an extension of close investment relations started by the Public Investment Fund with Lucid Group since 2018, which contributed to supporting Saudi Arabia’s efforts in the electric cars industry sector as part of the Kingdom Vision 2030 and in line with the fund’s strategy to develop the economic transformation process of Saudi Arabia and launch new sectors.

Besides the continuous attempts at the current time made by major automobile manufacturers and tech giants in the world to realize advanced levels of autonomous vehicles industry, industrial countries are racing to support this project and finish its experiments, especially that this scheme will cause a huge revolution in the vehicle industry with the use of AI technologies.

Autonomous vehicles are characterized by their ability to sense their surroundings and move with self-control and sufficiency and will contribute to reducing traffic jams on the roads, improving the quality of life and realizing the highest degrees of traffic safety.

These are characteristics focused on by the Kingdom Vision 2030 as part of its aspirations to benefit from technology, innovation and science fields, and out of keenness to ensure that Saudi Arabia is among leading countries in using modern technologies.

Some might think that using AI technologies is only a luxury that cannot necessarily be utilized in all walks of life, yet man in the present time cannot live without boosting his intelligence and intellectual capabilities with modern technologies not to be called illiterate, especially that it has become inevitable in light of the presence of AI-supported technologies that include: big data, Internet of Things, nano, augmented reality, 3D printing, genetics and robotics.

AI relies on several new methods and ways in programming computer systems that can be used to develop system simulating some elements of human intelligence, yet it does not completely cancel the importance of having the human mind in any process it does, where it is one of the technologies that can change balances at the international level as UNESCO mentioned in its periodical message in 2018.

Also, Crown Prince Mohammed Bin Salman, deputy prime minister and minister of defense, upon inaugurating the 2020 Global AI Summit, highlighted the importance of working hard to benefit from AI and launch the maximum of its potential to develop our societies and economies to make Saudi Arabia a model for AI in the world and to take the best of data and AI to reality.

The SDAIA supervises the use of AI technologies in Saudi Arabia and anticipates its future work, after a Royal Decree was issued on Thu Al-Hijjah, 1440 Hijri to establish the authority, where the decree included establishing a national center for AI and an office to administrate national data, which is organizationally connected to SDAIA.

The SDAIA is currently working with the transport sector to improve its infrastructure, enhance safety in its components and increase the efficiency of public transport as mentioned its e-publication for January, 2022 under the title “Autonomous vehicles — experiences and challenges”.

In case autonomous vehicles witness a development in its technologies and an increase in its production and experiments and adopting their policies, it is expected for them to become safe and credible by 2025 and will be commercially available in the world by 2030, before they account for 50% of sale by 2045 to be available for all by 2050.

The National Transport and Logistics Strategy also focused on enabling the sector to benefit from the modern technologies to develop the quality of life and increase sustainability, where the Ministry of Transport works on several projects, including preparing an organizational framework concerned with autonomous vehicles, where testing autonomous vehicles has started to ensure Saudi Arabia’s readiness to become a leading country at the regional level in these technologies.

As a result, the SDAIA is planned to hold a workshop on Thursday in coordination with Ministry of Interior to discuss the current situation in Saudi Arabia and the world and the experiments that have been made in autonomous vehicles, possible usages, challenges of listing these vehicles in Saudi Arabia and discussing enablers necessary for the success of this project with the participation of more than 50 representatives and specialists from relevant government institutions, including the Ministry of Transport and Logistic Services.

According to countries’ preparedness index for these vehicles prepared by KPMG in 2020, Singapore ranked first for its distinguished policies and laws on the quality of roads, followed by the Netherlands thanks to its developed infrastructure that spread charging stations for electric vehicles, then Norway that realized the highest market share of electric vehicles and the USA that is developed in supporting technologies, innovation, computing, Internet of Things and AI.
Add Comment