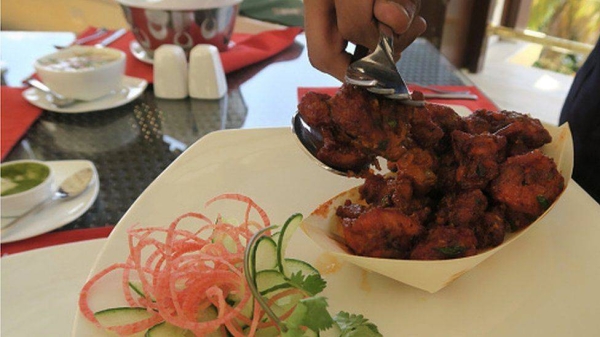 On Thursday, as the Indian government meets representatives of restaurants to sort out the contentious issue of the service charge that customers have to pay most times when they eat out, the BBC explains the unsavoury tussle over tips.
A couple of months back, Nicole Ruth Ellis visited a restaurant in Mumbai, the city where she lives and works.

The 27-year-old brand strategist describes herself as a "foodie" who eats out at least twice a week.

"But on this evening, the service was really bad. They served the pizza in a deep dish, so it arrived broken."

At one point, she says, the waiter came by to ask her if she was enjoying her meal.

"I was honest with him, I told him that it was not great. He heard me but then he just walked away."

When the bill came, she says, it included a 10% "service charge".

"I am not confrontational, so I didn't say that I will not pay the service charge, but I believe we should be tipping only if the service is really great. It shouldn't be forced upon us," she tells me.

Until a few years back, tipping was at the diner's discretion in India, but then many restaurants began levying a service charge - anywhere between 5% and 15% of the bill.

One restaurant owner told the BBC that there were two reasons for introducing the service charge - to ensure that the tip is not pocketed by the waiter but is shared among all the staff, including the chefs, janitors, cleaners and dishwashers; and because most Indians are not "generous tippers" - a claim contested by author and journalist Vir Sanghvi, who's India's most eminent food critic and perhaps the most prolific restaurant visitor.

"I don't think Indians are not generous when it comes to tipping. I see people often giving tips not just to waiters but to doormen and bellboys at hotels," Sanghvi says.

The tipping culture, he says, came to India from the West. Just as in 1960s America, employers could pay workers below minimum wages if they earned tips, in 1950s and 60s India - just years into the country's independence - "many standalone restaurants in Delhi's Connaught Place or Kolkata's Park Street or Mumbai's Churchgate Street did not pay their waiters salaries at all and expected them to get by with tips".

"And even today, waiters, unless employed in star restaurants, are paid very poorly and are expected to make the shortfall from tips and service charge," Mr Sanghvi says, adding that "it is the job of the restaurant to pay their staff, not the customer's".

The Indian government too insists that "the service charge is voluntary and is to be paid at the discretion of consumers".

In 2017, the Department of Consumer Affairs issued a set of guidelines saying that customers only had to pay the prices displayed on the menu card along with government taxes and charging for anything extra without their consent "amounts to unfair trade practice".

But with most restaurants continuing to add a service charge to the bill, the authorities have called the National Restaurant Association of India (NRAI) for a meeting on Thursday.

In a letter to the NRAI last week, the department said there had been complaints from consumers that they were still being "forced to pay service charge, often fixed at arbitrarily high rates" and that "they are harassed if they request to remove it from the bill".

The NRAI, which represents more than half a million restaurants, has rejected the charge of illegality. In a statement sent to the BBC, it said customers were made aware in advance about the service charge "as it's displayed on the menu cards and also on the premises. Then it becomes an agreement between the parties, and is not an unfair trade practice".

Some restauranteurs also said that diners unhappy with the service could ask to have the charge deleted from their bill.

"If patrons are unhappy, a good restaurant would immediately remove the service charge, no questions asked," said Saurabh Khanijo, owner of Kylin, a chain of popular pan-Indian restaurants.

"We don't even charge for a dish if a customer is not satisfied. Think about it - it works in our favor. If I treat the guest well, then they would return," he added.

But a refusal to pay the service charge doesn't always end well, forcing customers to go to court - some have even won compensation.

Also, as Ms Ellis said, customers like her are too embarrassed to insist on removing it from their bill.

Sanghvi has, for years, argued that tips should be totally abolished because:

and if we do not tip the stewardess after a good flight or a nurse who treated us well during a hospital stay, then why must we tip a waiter?

A service charge, he has argued, is a better bet - at least "in theory". But, he says, he worries that "unscrupulous restaurateurs often do not pass on all of the money to the staff and that too much is taken away by them as deductions for breakages and other things and that is not fair" - a concern that is not restricted to India.

"Ideally," Sanghvi says, "I always say that increase your prices, and pay your workers well. If you increase prices by 5%, it will cover all the breakages and a small price increase is not going to drive away your customers."

"Food is a very emotional thing for me so I feel very strongly about service if it's not great, especially if I've gone to a fancy place," she says. "When I see bad service or a rude waiter, I wonder if it's because he doesn't get the money I pay as service charge. So, I hope it goes away from the bill and I can pay if I'm happy with the service."
Add Comment