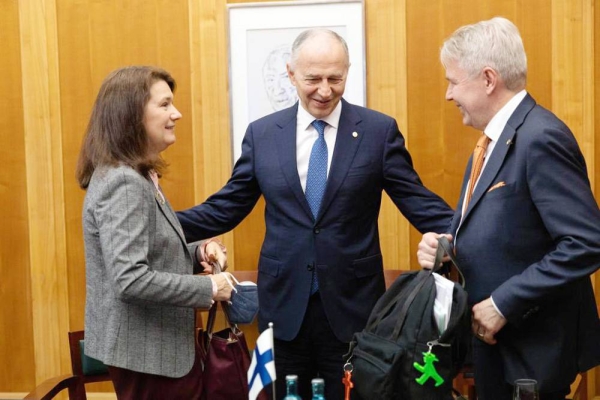 Finland's president and government announced Sunday that the Nordic country intends apply for membership of NATO, paving the way for the 30-member Western military alliance to expand amid Russia’s war in Ukraine.
President Sauli Niinistö and Prime Minister Sanna Marin made the announcement of the historic policy shift from the country's traditional neutrality at a joint news conference.

Sweden's ruling Social Democratic Party later gave the green light to a NATO bid for its country, paving the way for the government to apply for membership jointly with Finland.

However, Turkey has raised objections and has threatened to veto the bids.

"Today, we, the president and the government's foreign policy committee, have together decided that Finland ... will apply for NATO membership," Finland's President Niinistö told reporters gathered at the Presidential Palace in Helsinki.

The Finnish Parliament is expected to endorse the decision in coming days, but it is considered a formality.

A formal membership application will then be submitted to NATO headquarters in Brussels, most likely at the some point next week.

At an extraordinary meeting, the leadership of Sweden's Social Democrats decided that the party would "contribute to a Swedish application for NATO membership", the board said in a statement, reversing their long-standing line.

The party has long been opposed to NATO membership, but has changed stance over Russia's invasion of Ukraine and the subsequent war.

"The Social Democrats will thus work for Sweden, if the application is approved by NATO, to declare unilateral reservations against the deployment of nuclear weapons and permanent bases on Swedish territory."

NATO Secretary General Jens Stoltenberg said the bids would be a "historic moment" and were proof that "aggression does not pay". The NATO chief said their applications would strengthen common security and show that the alliance's door was open.

The alliance's foreign ministers met on Sunday in Berlin to discuss the moves by Finland, Sweden and others to join the western alliance in the face of threats from Russia.

US Secretary of State Antony Blinken, attending the meeting, said there was "a strong consensus for bringing Finland and Sweden into the alliance".

“Finland and Sweden are already the closest partners of NATO," NATO Deputy-Secretary General Mircea Geoana said earlier on Sunday, adding that he expected allies to view their applications positively.

NATO leaders have played down Turkey's opposition to the Finnish and Swedish membership applications.

But Ankara has warned that it could veto the bids, because it says Finland and Sweden both support Kurdish groups, which it considers "terrorist" organizations.

Turkey's foreign minister said on Sunday that both countries must also provide clear security guarantees and lift export bans on some defense sector goods to Turkey.

"Our stance is perfectly open and clear. This is not a threat, this is not a negotiation where we're trying to leverage our interests," Mevlut Cavusoglu said.

His comments echoed those he made on Saturday, claiming domestic public support for the Turkish government's stance.

"A big majority of the Turkish people are against the membership of those countries who are supporting PKK, YPG terrorist organization," Cavusoglu said. "And they are asking us to block this membership."

Also speaking on Saturday, Finland's foreign minister downplayed Turkey's objections before the talks began, saying he had spoken to his Turkish counterpart to try to ease tensions.

"I'm sure that we will find the solution to this item," Pekka Haavisto told reporters.

German Foreign Minister Annalena Baerbock said her country and others made clear during a dinner late on Saturday that they would be willing to fast-track the national ratification process for Finland and Sweden.

“If these two countries are deciding to join, they can join very quickly,” she said.

“Each and every European country has a fundamental right to choose their own security arrangement," Jeppe Kofod told reporters.

“We see now a world where the enemy of democracy number one is Putin and the thinking that he represents,” he said, adding that NATO would also stand with other countries, such as Georgia, which he said were being “instrumentalized” by Russia.

Finland's President Sauli Niinistö formally notified Vladimir Putin of his country's move to join NATO, in a phone call on Saturday. The Russian leader said it would be a mistake.

The meeting in Berlin follows a gathering of foreign ministers from the Group of Seven leading economies on Germany's Baltic Sea coast.