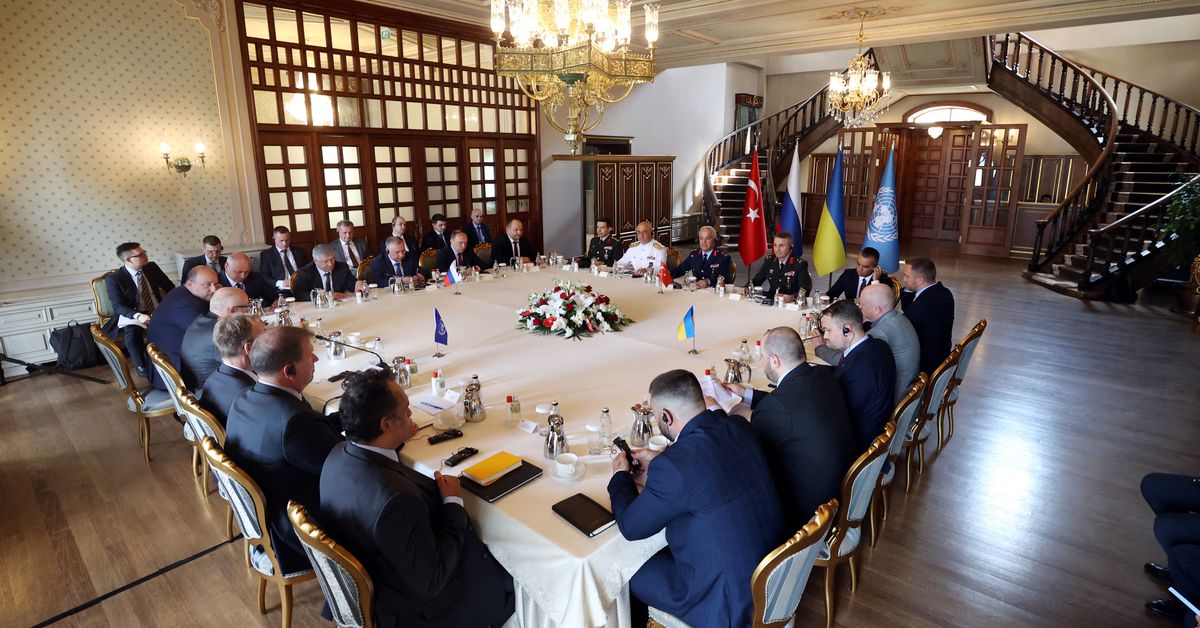 Turkey announced a deal with Ukraine, Russia and the United Nations on Wednesday aimed at resuming Ukrainian grain exports blocked by Russia, raising prospects for an end to a standoff that has exposed millions to the risk of starvation.

Turkish defence minister Hulusi Akar said the deal would be signed when the parties meet again next week and included joint controls for checking grains in ports and Turkey ensuring the safety of Black Sea export routes for Ukrainian grain.

Turkey would also set up a coordination centre with Ukraine, Russia and the United Nations for grain exports, he said.

Ukraine, which was invaded by Russia in February in what has become Europe's biggest conflict since World War Two, had said earlier that a deal appeared just "two steps away" as Turkey hosted the four-way talks in Istanbul.

U.N. Secretary General Antonio Guterres said a "critical step forward" had been made toward reviving Ukrainian grain exports but cautioned that "more technical work will now be needed to materialize today's progress".

"Next week, hopefully, we'll be able to have a final agreement. But, as I said, we still need a lot of goodwill and commitments by all parties," he told reporters in New York.

Guterres added that although Ukraine and Russia had engaged diplomatically, "for peace we still have a long way to go".

There was no immediate comment from Ukraine or Russia, both among the world's largest grain exporters.

Several Ukrainian cities meanwhile reported heavy Russian shelling and, while not linking a grain deal to progress in talks to end the war, Ukrainian Foreign Minister Dmytro Kuleba was downbeat on prospects for peace.

More than 20 million tonnes of Ukrainian grain are stuck in silos at the Black Sea port of Odesa and dozens of ships have been stranded due to Russia's blockade, part of what Moscow calls its "special military operation" in Ukraine but which Kyiv and the West say is an unjustified war of aggression.

The talks, in Istanbul between Ukrainian, Russian, Turkish and U.N. officials, took place behind closed doors at an undisclosed location.

Diplomats said earlier that details of the plan under discussion at Wednesday's talks included an idea for Ukrainian vessels to guide grain ships in and out through mined port waters; Russia agreeing to a truce while shipments move; and Turkey - supported by the United Nations - inspecting ships to allay Russian fears of weapons smuggling.

Turkey published a photograph of the meeting showing the Russian and Ukrainian delegations sitting opposite each other looking stony-faced.

Apart from being major global wheat suppliers, Russia is also a large fertilizer exporter and Ukraine a significant producer of corn and sunflower oil. So, clinching a deal to unblock exports is seen as vital for food security, notably among developing nations, and for stabilising markets.

Ukrainian officials said there had been sustained Russian shelling across Donetsk province, which Moscow aims to capture to complete its seizure of the industrialised Donbas region of eastern Ukraine. Much of the region was controlled by separatists - labelled Russian puppets by Kyiv - before the war.

Russian state news agency TASS on Wednesday quoted a separatist official, Vitaly Kiselyov, as saying Russian and proxy forces had entered the town of Siversk in Donetsk province and could take it in a couple of days. It was not clear what that assertion was based on.

In their evening briefing note, Ukraine's armed forces said Russia had not conducted any new assaults on the frontline that includes Siversk, but that the town had been fired on by artillery.

Russia and its proxy forces in eastern Ukraine have previously struggled for many weeks before capturing targets such as the cities of Sievierodonetsk and Lysychansk.

Russia, which says it does not target civilians, said on Wednesday it had shot down four Ukrainian military jets, an assertion the Ukrainian air force dismissed as propaganda.

Reuters could not independently verify the battlefield accounts.

As the Istanbul talks got under way, Foreign Minister Kuleba reaffirmed Ukraine's overall stance in the war, telling a briefing there were still no peace talks with Moscow and no territory would be ceded to Russia under any future deal.

Ukraine and the West have accused Russia of exacerbating a global food crisis and fuelling inflation by complicating attempts to supply poorer nations with grain.

Moscow has blamed Ukraine, accusing it of refusing to remove mines that it scattered around its coastline to protect itself from Russia's attack and that represent a threat to shipping.

Russia has also lashed out at the West for imposing sanctions on a range of sectors that make it harder for Russia to fund and insure its own maritime freight services.