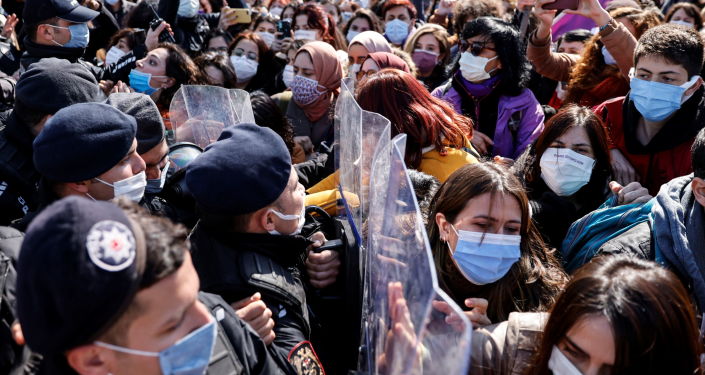 Several thousand women on Saturday took to the streets of the Turkish city of Istanbul to protest President Recep Tayyip Erdogan's decision to withdraw from the EU-backed Istanbul Convention on women's rights, national media reported, adding that police deployed tear gas to disperse the crowds.
The decision to pull out of the treaty designed to reduce and prevent domestic violence against women was announced on 20 March and was condemned by the European Union, the United Nations and the United States among others.

According to the Evrensel newspaper, women gathered in Istanbul's Kadikoy district, chanting slogans "We are not silent, we are not afraid," and "Istanbul Convention saves lives," among others.

The police demanded the loudspeakers be switched off. The women ignored the orders, after which the police used tear gas.

According to the media outlet, there were also members of the LGBTQ community among the protesters.

The Istanbul Convention is a human rights accord backed by the Council of Europe. Turkey was the first country to ratify the convention, which was adopted in Istanbul in 2011.
Add Comment