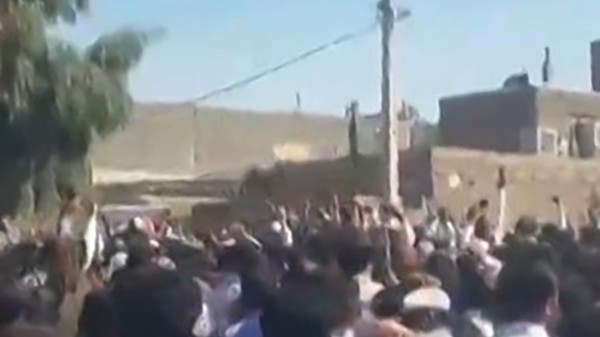 Iranian security forces opened fire on Friday on demonstrators in a southeastern city that has seen weeks of unrest amid nationwide demonstrations, activists said.
Activists said the shooting in Zahedan killed at least two people, threatening to ignite further tensions.

Located in Iran’s long-restive Sistan and Baluchestan province, Zahedan has seen the deadliest violence so far in the weeks of protests that have gripped Iran.

The demonstrations in the city erupted in part over a rape allegation against a senior police officer there, dovetailing the protests over the September death of 22-year-old Mahsa Amini that have inflamed most of the country.

Activists estimate that in Zahedan alone, nearly 100 people have been killed since a September 30 rally there set off a violent police response.

On Friday, soldiers surrounded a key Sunni mosque in the area where residents rallied against the Iranian government, while also shooting at demonstrators, activists said.

The protests across Iran have become the greatest threat to the country’s theocratic government since the 2009 Green Movement demonstrations, evolving from focusing on women’s rights and the state-mandated headscarf, or hijab, to calls to oust Shiite clerics who have ruled Iran since the 1979 Islamic Revolution.

Video filmed by HalVash, a group with advocates for the rights of Baluch citizens in Iran, showed demonstrators and security forces gathering on the streets around a mosque with fires burning and gunshots and explosions ringing out.

At one point, someone shows off spent bullet cases from what he claims were live rounds fired by the security forces.

Iran’s Sistan and Baluchestan province, bordering Afghanistan and Pakistan on the Gulf of Oman, is a majority Sunni region.

Its Baluch people long have complained about being treated as second-class citizens by Iran’s Shiite theocracy.

The state-run IRNA news agency carried a statement by the province’s security council earlier on Friday saying that the police chief in Zahedan and another police official have been sacked over their handling of the September 30 protest.

The statement for the first time acknowledged that police shot and killed people praying at the time at a nearby mosque.

The security council’s version of the demonstration alleged that 150 people, including armed men, attacked a police station and attempted to take it over during the protests.
#Afghanistan
Add Comment