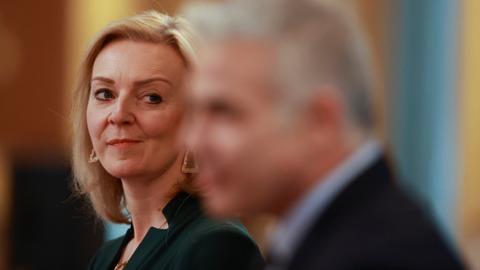 In an effort to increase its post-Brexit geopolitical clout, London is strengthening its relations with states accused of gross human abuses.

It has been almost a year since Britain formally left the European Union. Since then, Boris Johnson’s Conservative government has come under fire for drawing closer to its human rights abusing allies, even as it promotes the mantra of a “Global Britain” that champions human rights worldwide.

On November 29, UK Foreign Secretary Liz Truss and her Israeli counterpart Yair Lapid announced that Israel would become a “tier-one cyber partner for the UK”.

Yet Britain’s adoption of Israeli technology could have malign consequences. As the Middle East Eye reported, the UK-Israeli agreement came months after allegations that around 400 British citizens and residents were targeted with Pegasus spyware from the Israeli-based firm NSO Group, including two members of the House of Lords.

The two ministers also proclaimed their mutual desire to counteract Iran in the Middle East. This comes as the EU pursues further talks with Iran in a desperate bid to revive the 2015 nuclear deal. While Iran made further preconditions for an agreement, Britain’s siding with Israel — which staunchly opposes a renewed agreement — could now undermine London’s past support for reviving the nuclear deal.

Along with a populist vision propelling Britain’s shift towards its historic allies, Britain has also faced economic vulnerability after leaving the European Single Market last year. Thus, it has pursued hasty trade deals with other countries, including former colonies now in the Commonwealth of Nations, such as in Africa - especially Kenya and Nigeria - India and Australia. And it now seeks to bolster relations with its traditional Middle Eastern partners.

Britain’s past stance towards Israel has often seemed perplexing. On the one hand, London has criticised Israeli settlement expansion in the occupied West Bank and its actions against Palestinians. David Cameron, one of Britain’s most pro-Israel prime ministers in living memory, warned in 2010 that Israel’s siege on the Gaza Strip had turned it into a “prison camp”.

Now Britain wants to maintain Israel as a key arms client, trade partner, and ally so it can have strategic influence in the Middle East. This has become more profound following Brexit. Even after the 2016 Brexit referendum, trade volume between London and Tel Aviv noticeably increased.

Meanwhile, as Israel bombed Gaza last May using cutting-edge F-35s in its campaign, the US arms company Lockheed Martin which manufactured the aircraft said that “the fingerprints of British ingenuity can be found on dozens of the aircraft's key components". The UK Defence Journal estimates them to be 15 percent British-made.

While there is much global focus on the United States’ unconditional support for Israel, it was Britain that initially facilitated the state of Israel following the 1917 Balfour Declaration, begetting the Mandate for Palestine which set the foundations for a future Jewish state in historic Palestine.

At the time, Britain’s ‘double-game’ was apparent. On the one hand, it promised Palestine to the Arab leaders of Mecca should they revolt against the Ottoman Empire, while it really intended to give the land to the Zionist movement.

Britain has subtly championed neo-imperial fantasies of its role in the Middle East, and Johnson has now pulled the rug from under this façade. Under his populist leadership, Britain has hardened its traditional support for Israel, from banning the Boycott Divestment and Sanctions (BDS) movement from public bodies, to designating the Gaza-based Hamas party as a terrorist organisation in its entirety.

Ultimately, Britain’s strengthening of relations with Israel complements its aims to exert greater geopolitical influence in the Middle East by deepening its trade, arms sales and military cooperation with its traditional allies in the region, along with compensating for the loss of EU trade and relations.

Truss was Trade Secretary when she admitted that she “accidentally” sold weapons to Saudi Arabia, just after the UK’s own Court of Appeal deemed such transactions to be ‘illegal’ following the Riyadh-led intervention in Yemen, showcasing Britain’s desires to maintain ties to the Gulf despite legal issues.

After all, the Gulf is a key region in which Britain seeks to maintain modern-day influence. The UK is currently pursuing a free trade agreement with Gulf Cooperation Council (GCC) states, either individually or collectively through the GCC. The GCC is already one of the UK’s largest trading partners, with bilateral trade amounting to almost £45 billion ($60 billion) in 2019.

One controversial partner is Bahrain, where London was accused of putting “trade before torture”, after Johnson hosted Bahraini officials in Downing Street in June 2021. More recently, a Bahraini political activist, Ali Mashaimi, has staged a hunger strike outside the Bahraini Embassy in London, protesting the abuses of his 73-year-old father Hassan Mushaima and 69-year-old Dr Abduljalil al Singace, two of the many political dissidents facing alleged torture and mistreatment by the Bahraini authorities.

Despite such domestic concerns raised over Bahrain’s practices, including in the British parliament, London has empowered Manama’s monarchy, as it seeks to maintain a crucial naval base in the country. Britain’s Ambassador to Bahrain Roddy Drummond reportedly told reporters in September 2019 that British military objectives in the region “depend on the support from the Kingdom of Bahrain”.

Brexit has not created major changes in Britain’s foreign policy, given these are historic allies and Britain has shown reluctance to address their human rights policies in the past. However, London is making more reactionary strides in its foreign policy, at the expense of British civilians and people in the Middle East, and its hardening approach towards Iran indicates it may abandon diplomacy for its geopolitical objectives.