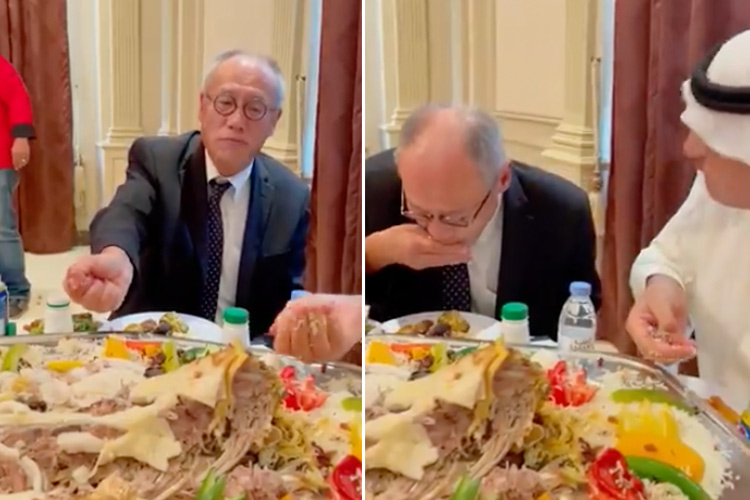 A video of the Japanese Ambassador to Saudi Arabia Fumio Iwai eating "Al Muftah" with his hand has gone viral on social media.

The envoy wrote on Twitter, “I tried eating the Muftah for lunch, and used the advice from His Excellency the Governor, so that I could eat Muftah…”

The Muftah dish is one of the most popular cuisines in Saudi Arabia. The dish is considered as a symbol of generosity among the people, and often present at events and celebrations.

The dish is simple and consists of cooked lamb placed over a large dish of rice and adorn many spices and boiled eggs, liver, cinnamon and pepper.

Fumio Iwai also wrote, “We counted these cultures in Japan...Eating in one plate…”

A user with the name Saad wrote on Twitter, “Easier than chop sticks for sure…”

Fumio Iwai responded to the Tweet, “We are Japanese, we eat sushi by hand…”

Ramze Elzahrany said, “This habit of eating with hands is not mastered by many people, especially the younger generation, and it is fading quickly. Greetings and appreciation for the attempts…”

Hasan Gamdi said, “It was common before alternatives were available, but today some people consider it inappropriate habit.”