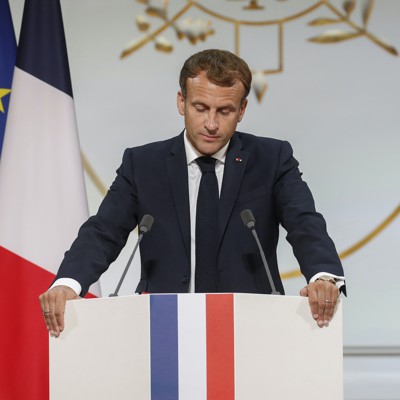 Why France Is Getting No Sympathy for Its Lost Sub Deal

Its European neighbors have long bristled at Paris’ self-dealing and aggressive sales tactics.
France is fuming over AUKUS—the new tripartite security arrangement that scuttled its contract to build submarines for Australia—but is receiving scarcely any expressions of sympathy from fellow EU member states. That may be because France itself uses some distinctly tough tactics to secure arms exports, and sells to customers others deem unsavory. Yes, Paris considers arms exports essential to its sovereignty, but its friends too are interested in sovereignty, not to mention fair play.

One day after Saudi journalist Jamal Khashoggi was killed at the Saudi consulate in Istanbul in October 2018, President Emanuel Macron of France and his top ministers received a classified intelligence briefing documenting how Saudi Arabia was using French weapons in Yemen. Six months later, with Germany and other European countries having stopped selling arms to the Saudis, Macron dismissed as “populist” calls for France to do the same.

More than 130,000 Yemenis have already been killed in that country’s ongoing civil war, and more than 16 million don’t have enough to eat. But ordinary Yemenis’ suffering at the hands of the Saudi coalition and the Houthi fighters hasn’t ended French arms exports to Saudi Arabia. In 2018, French arms exports grew by 50 percent; they included a one-billion Euro sale to Saudi Arabia of patrol boats and other equipment. As Reuters noted, one of the tactics used by Yemen’s Saudi-led coalition is to block ports controlled by the rival Houthis.

And last year, when French arms exports slumped dramatically, sales to Saudi Arabia helped keep the French defense industry afloat. The Gulf kingdom bought 704 million Euros’ worth of French arms, more than any other country. And despite last year’s slump, French arms sales rose 44 percent from 2016 and 2020, outperforming all the other top-five arms exporters.

Most countries with significant defense industries rely on exports to keep them going. But France goes about securing exports in an extremely energetic manner that involves not just defense industry executives but politicians all the way up to the President of the Republic. Indeed, even for French arms-makers that are not owned or part-owned by the government, French politicians act as salesmen to other countries and don’t mind outflanking other countries’ companies in the process. To be sure, U.S. and many other countries’ ministers and officials, too, ply their countries’ deadly wares to other leaders. Few, though, do so as energetically as France.

And France, which considers itself a global actor, clearly feels that status justifies unfriendly negotiation tactics at the expense of allied countries. “Arms exports are the business model of our sovereignty,” Defense Minister Florence Parly noted in 2018.

The saga of Switzerland’s planned fighter jet purchase is illustrative. In 2012, the country decided to replace its aging fighter-jet fleet with Saab Gripens. The Swedish aircraft, deemed not to be the highest performer but good value for money, defeated Dassault Rafale—which had struggled to find foreign buyers—and Eurofighter Typhoon. But at the 11th hour, a confidential report sowing doubts regarding the Gripen’s capabilities surfaced and created a media circus. (Oddly, the circulated report was in English, not one of Switzerland’s official languages.) In a subsequent referendum, 52 percent of voters rejected the deal. This year, Switzerland finally reached a new decision—in favor of the F-35.

Then-President François Hollande was a bit more open about the government’s assistance to arms manufacturers than other French politicians have been. At the 2013 Paris Air Show, as Hollande helped Dassault Aviation’s elderly CEO Serge Dassault ascend the steps to an exhibition stand, he quipped that “it’s the state that’s supporting Dassault…as usual”.

The arrangement leaves countries whose politicians don’t use strong-arm tactics to sell arms at a distinct disadvantage. And it doesn’t endear France to its fellow EU member states. Indeed, when it comes to defense equipment, France is distinctly unpopular among EU member states for another reason as well: it is known to systematically use an escape clause in the Treaty on the Functioning of the European Union to give government contracts to French firms. The escape clause, Article 346, allows EU governments to procure from domestic companies rather than putting the contracts to EU-wide tender—but only in cases of essential security interest. It is, however, up to member states themselves to determine what they consider an essential security interest.

France is among the countries that interpret that interest rather liberally. As the European Parliament’s research service noted in a report in October last year, “despite repeated guidance from the European Commission and CJEU17 that Article 346 TFEU should be used only for specific reasons and on a case-by-case basis, in practice many Member States have continued to interpret the provision ‘as a categorical or automatic exclusion of armaments from the application of EU law’.” In other words, these member states use the clause to systematically buy from their defense industries at the expense of other European firms. In 2019, a European Parliament commission issued a report that called on “Member States [to] strictly respect the conditions of applications of exemptions and, in particular, to strictly limit the potentially abusive use of Article 346”. But the abuse continues—and the governments that dutifully put procurement contracts to EU-wide tender lose out.

All this explains why France’s furious reaction to AUKUS has received little sympathy from its allies. Nobody likes to see a friend hurt – but if that friend has a habit of advancing its interest at others’ expense, there’s no love lost. If France wants to shore up support against the United States, the UK, and Australia, it may have to rethink how it treats its friends, including in the key area of defense exports.
#jamal khashoggi
Add Comment