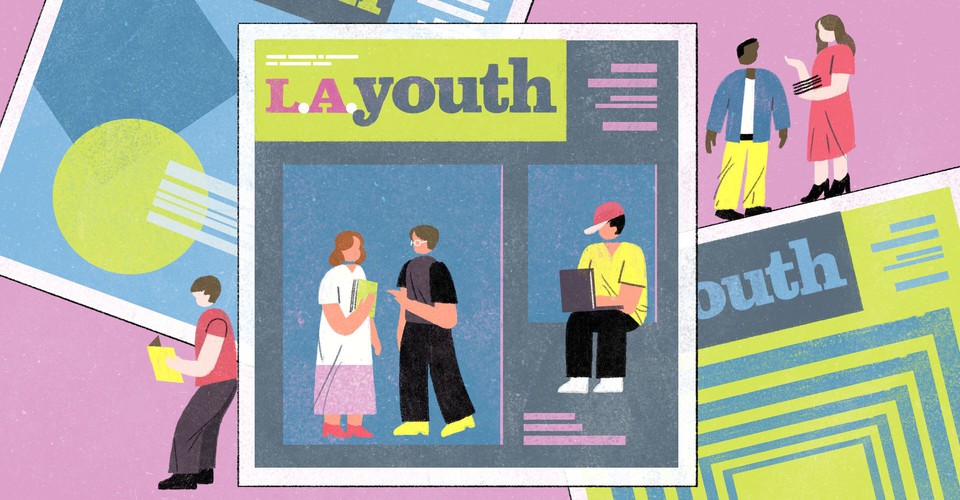 A Newspaper by Teens, for Teens

“The lessons I learned and the people I met have always influenced who I am as a person and as a parent. Those were formative years.”

This week she talks with the founder, a former editor, and several former student journalists of L.A. Youth, an independent nonprofit newspaper for and by teens in the Los Angeles area that ran from 1988 to 2013. They reflect on how their time at the paper shaped their values and the people they became as adults; how meaningful it is for high schoolers to have their voices heard; and the friendships they’ve carried with them from their teen-journalism days.

This interview has been edited for length and clarity.

Julie Beck: What brought you all to L.A. Youth, and how did you get to know each other?

Stephanie Cruz: Donna is our connector.

Johnathon Briggs: The roads all lead back to Donna.

Donna Myrow: I'm the founder and former publisher of L.A. Youth, the newspaper by and about teens. I’ve known all of these folks since they were kids in high school. We’ve kept in touch over the years.

Prisco Serrano: I met Donna around 1990. I was in 11th grade, and I was a writer for the youth newspaper. I saw L.A. Youth as a way of rebelling, because I thought that it was a way of me saying what I wanted to say. I thought journalists were, in a sense, rebels, people who spoke about injustice.

Later, when I was going to law school at night, I worked at L.A. Youth as the administrative assistant. To this day, I still remember the office phone number.

Jason Sperber: I joined L.A. Youth as an 11th grader at L.A. High in 1990, so I’ve known Prisco and Donna for 30 years. Prisco and I were writers, then we were student-editors, then we both had part-time jobs at the office. That’s when I met Mike. My Facebook friends list is full of people from L.A. Youth, people who were my mentors and people I came up with, and people I taught who later became friends.

The lessons I learned and the people I met have always influenced who I am as a person and as a parent. Those were formative years.

Johnathon: I joined L.A. Youth in the summer of 1992, after I graduated from high school. I couldn’t find a job. My mother came home with a copy of the newspaper she saw at City Hall, threw it at me, and was like, “Make yourself useful; get out of the house.” So I got on the bus and I went to the office, and I ended up being put to work right away on an article.

Mike Fricano: I was an editor at L.A. Youth. I am an exception to what Donna said—she did not meet me as a teenager. She met me as a 26-year-old. In 2002, I had quit my job as a newspaper reporter and decided to move to California. I didn’t have a prospect. I applied to some daily newspapers and also to this very bizarre-looking thing called L.A. Youth. I didn’t even know independent nonprofit teen journalism existed.

From the first time I walked through the doors, I could tell that Donna had created a place that just felt like where I needed to be at that point in my life. Probably all of us have felt that. It was a place where we all got to start actualizing, to be like, What’s the best version of me? It was a place where I could be weird me, nerdy me, and angry me, all of the different things. Before the term safe space was really a thing, I felt like L.A. Youth was a safe space.

Donna really emphasized that we have as much to learn from the teens as we do to teach them, and if anything, they have more to teach us. Being in a place like that, that valued the opinions of people whose brains weren’t fully formed, was a really, really, really powerful thing.

Stephanie: I’m the most recent teen staffer at L.A. Youth. I joined in my last year of high school, in 2003. They had this newcomers’ day coming up, and I was like, Why not? I got hooked. Mike was my editor and sometimes still is. I still lean on him to read my stuff and tell me to streamline, streamline, streamline.

Beck: What was the social environment like in the newsroom? 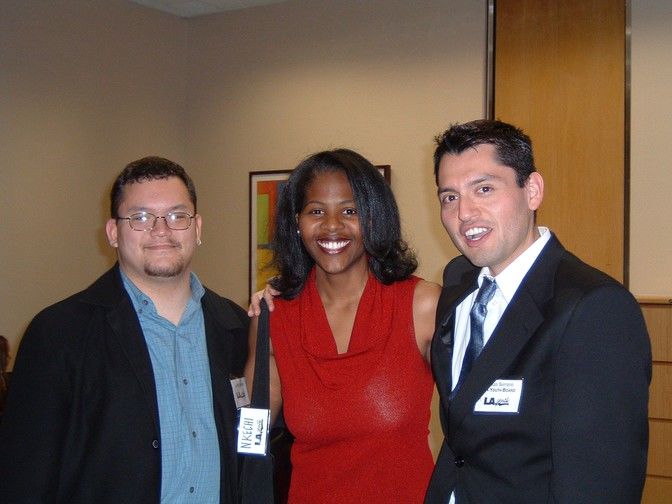 Jason Sperber (left) and Prisco Serrano (right) with another L.A. Youth alum at an event  (Courtesy of Mike Fricano)

Donna: Over the last 10 years of L.A. Youth, at least 300 teens came through our door annually. Some would stay for three years and others we never saw again.

Jason: Prisco and I were there after school, every day, and on Saturdays. That was my main social life, meeting kids from all over the city. I took a friend from L.A. Youth to my senior prom.

Mike: In high school, I didn’t know many teenagers, if any, who I didn’t go to school with. For a lot of students, your universe is the people you see every day in your high school. But L.A. Youth being county-wide meant that there was much more geographic diversity. We happened to not be far from Beverly Hills High School, so we always had a few students from there. Some of them, obviously, came from kinds of wealth that I still can’t really fathom. But we also had—

Donna: We had a student who lived on Skid Row, and she wrote an amazing story about it.

Stephanie: [We had] exposure to students of different socioeconomic classes as well as different interests and abilities. Mike was an amazing advocate, so was Donna, so were all the other editors. All they wanted was to see us succeed. They recognized that students from some schools didn’t have the benefits or the training that students from other schools did. L.A. Youth was an equalizer in that sense.

Prisco: L.A. Youth was a place where you could have fun, but also get your problems resolved.

Donna: I got special funding to work with teens who were in the foster-care system. Several of the foster youth contributed and worked on stories. I still remember the day that one of them came to our office on her way to a shelter 70 miles away, for young pregnant girls. She had no money for the train ticket. I grabbed a bunch of blankets and things from the earthquake kit in the back, and some of the emergency money. I drove her there, and we talked all the way. I told her about my daughter-in-law, who was expecting a baby at about the same time. We were from two different worlds, but [L.A. Youth] became one world, really. 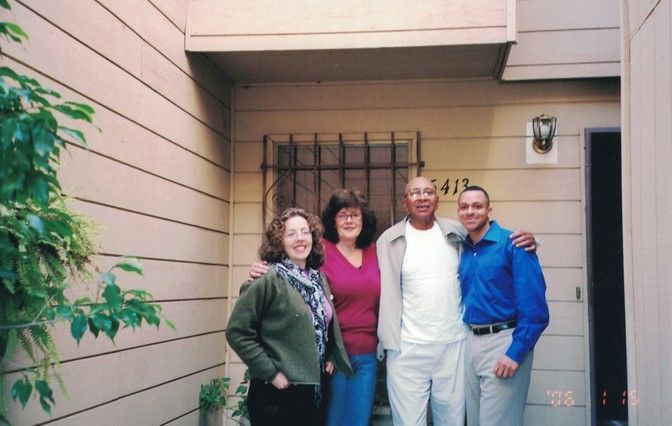 Johnathon: I remember meeting students who I never would have [otherwise]. Even though I lived in South Central L.A., I was bused out to schools in the San Fernando Valley. I didn’t know a lot of the neighborhood kids. It was great for me to meet kids from my own neighborhood [at L.A. Youth].

It was just this clubhouse built for me. I felt very welcomed. I felt safe there. Libby [one of the editors] really validated my voice. She told me, “You have something valuable to say. Your perspective is worth sharing.” That’s really empowering when you’re a teenager and you don’t have a job, you don't have money, you can’t vote yet.

That made me feel bold: Okay, I’m going to say this. I wrote a piece in reply to then-Vice President Dan Quayle’s remarks about a Murphy Brown episode and kids born out of wedlock. My mother was a single mother at the time, and I took offense at what he said. That piece advocated for different kinds of family structures—you don’t have to have a mom and dad to have a strong family.

One of my fellow high-school students had an opposite point of view, and his piece appeared next to mine. So the diversity was not just geographic. We were bringing different perspectives, and I think that was valuable. I still, to this day, do not agree with what my friend wrote, but the fact that he had an outlet to share that, that was important.

Jason: We would have arguments. Prisco and I argued all the time about politics. Somehow we ended up basically having the exact same positions on everything, even though in high school we did not.

But we had a lot of fun. There’s a picture floating around of a bunch of us lying on the floor, having a protest, a die-in against Libby for killing all of our words. 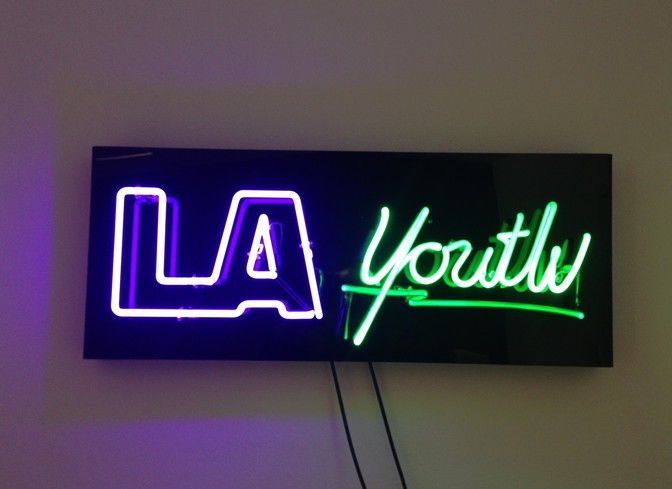 A neon sign from the L.A. Youth office (Courtesy of Mike Fricano)

Beck: I wonder if I could try that.

Mike: I think what’s really special about that anecdote is, when you’re in high school, how many adults can you push back against who aren’t your folks?

Beck: After you guys left the paper, did you stay in touch with your L.A. Youth friends?

Mike: Steph was one of the first students I worked with. I was just her editor at that time; I never anticipated that she would become one of my best friends. But I have visited her in Seattle almost every Christmas, for the last 10 years. We talk almost every day; I’m pretty close with her folks. Even though her mom speaks almost no English and I speak almost no Spanish, I still think we’re close, and her dad is a wonderful translator for us. 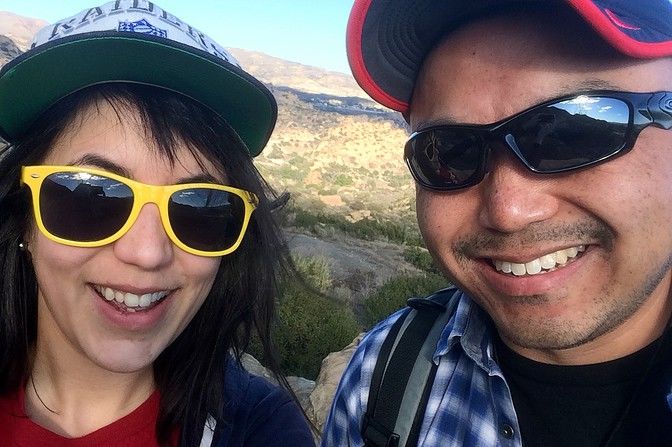 Johnathon: When my mother came home with the paper, I would have never imagined that almost 30 years later, I would still be connected to L.A. Youth. But you end up with these connections that are in the constellation of your life.

It’s funny: Even though Prisco and I haven’t spoken in a long time, it’s almost like a fraternity. These people have shared values, and they get a part of you that others won’t understand. L.A. Youth was a shared experience. It was a shared learning. It was a shared community. To hear that Prisco’s doing immigration law sounds about right to me. That’s the Prisco I remember. Somebody who was passionate and an advocate and poured a lot of heart into their endeavors and really cared about people. So it’s great to see that manifest.

Beck: What are some of those shared values?

Johnathon: There’s a belief in the power of empathy. When you’re a teenager, things are very black-and-white; they’re either right or wrong, and no one understands you. I learned at L.A. Youth that there’s another perspective, but you have to put yourself in that person’s shoes to get it.

We also believe that people should be allowed to express themselves, and that there’s validity in what people have to say. It’s not that people are voiceless; it’s just that we don’t want to hear them. L.A. Youth elevated our voices.

Jason: I worked with Donna over the years on fundraising campaigns, the multiple times we tried to save the paper. Sometimes it worked, and then finally it didn’t. But the way I always put it was: No matter how old you are or where you come from, everyone has a voice, everyone has a story to tell, and everyone deserves that story to be heard by somebody else.