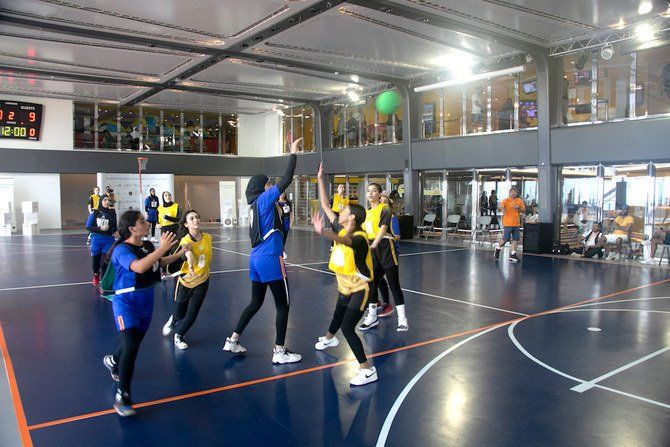 Saudi Arabia has held the Kingdom’s first netball tournament onboard a cruise ship.
The event was held on the 4,500-passenger MSC Bellissima ship in the Red Sea. It was hosted by Saudi Netball, in collaboration with Sports for All and the Saudi Tourism Authority (STA).

The women-dominated sport is being promoted as part of the Kingdom’s Vision 2030 to increase women’s participation in sport as part of a healthy and active lifestyle, STA said.

“Netball is an ideal sport to introduce across schools in the Kingdom,” said Princess Ghada bint Abdullah, chairwoman of Netball Saudi, adding: “As a game, netball is inviting, accessible, encouraging, fun, and inclusive. Its game rules ensure the equal participation of all players on the court.”

She said that “in netball, everyone contributes equally to the success of the team, regardless of the individual role they play. It is the perfect expression of an inclusive society.”

Just two teams took part in the three-round tournament, which was held on Thursday and Friday. The 16 players ranging from 13-23 years old came from the Riyadh-based Golden Sports Academy.

“Inclusion, the diversification of sports, and accessibility to sporting activities are three key objectives that drive our efforts to develop the sport across Saudi’s communities,” said Prince Khalid bin Al-Waleed, chairman of the Sports for All Federation.

He said his organization “sees a sizeable opportunity to support the development of netball in Saudi Arabia.”

Netball Saudi is one of 16 sports federations and committees announced by the Saudi Olympic Committee in May, as part of the committee’s effort to widen the range of sports offered and the number of sporting communities in the Kingdom, STC said.
Add Comment