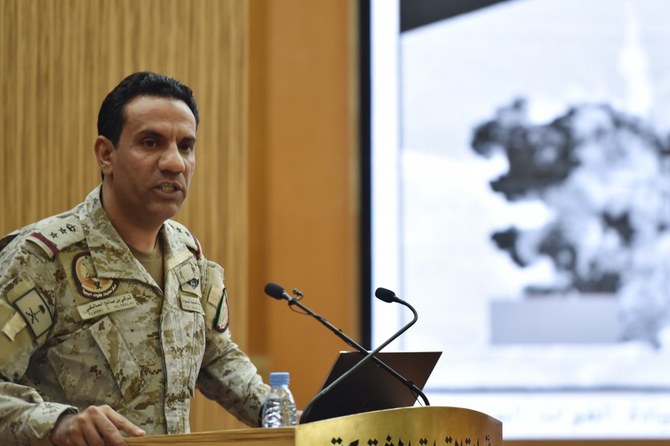 The Arab coalition said it had intercepted and destroyed a drone targeting Saudi Arabia’s Abha airport on Saturday.
The coalition said it is dealing with the source of the threat “to protect civilians from hostile attacks.”

Earlier on Saturday, the coalition said that 157 Houthis had been killed in strikes on the Yemeni areas of Al-Bayda, Al-Jouf, and Sirwah.

Fourteen military vehicles were also destroyed during the strikes that took place over the last 24 hours.

The coalition has been reporting near-daily strikes over the past month against the Houthi militia.

The secretary-general of the Organization of Islamic Cooperation, Dr. Yousef Al-Othaimeen, condemned the Houthi attack.

He said targeting civilians is a cowardly terrorist act, a war crime and grave violation of international humanitarian law.

Al-Othaimeen reiterated the OIC’s support for all measures taken by Saudi Arabia to protect civilians and strategic assets.

The OIC chief called on the international community to take action against the Houthi attacks.

Echoing the view of the OIC chief, the Arab Parliament also voiced support for Saudi Arabia and condemned the Houthi attack.

The Arab body called on the global allies to hold the terrorist militia accountable for its crimes and violation of international laws.

The Arab Parliament expressed solidarity with Saudi Arabia in its measures to defend its lands and ensure the security and safety of its citizens and residents.
Add Comment