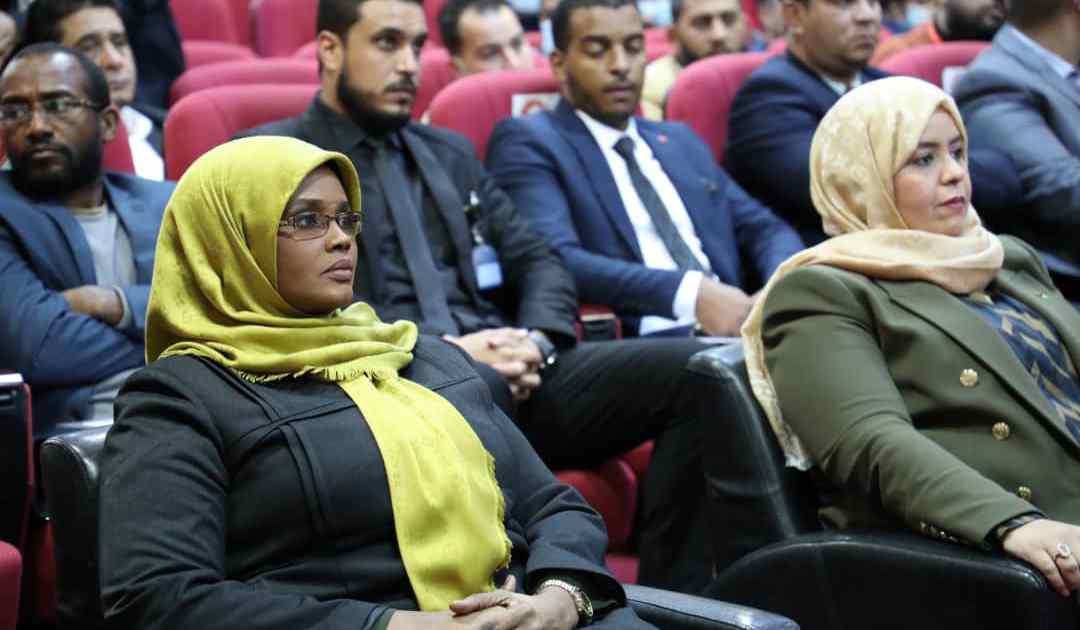 Libya’s culture minister was released in January after six days in prison, but has not resumed her official duties.

When Mabroukah Toughi, Libya’s culture and knowledge development minister, filed a complaint against her deputy at the public prosecutor’s office on December 29, she did not expect to find herself arrested.

Toughi, Libya’s first Black female minister, was accused of corruption and taken to a prison in Tripoli, where she spent six days locked up along with other female prisoners.

Speaking from the temporary accommodation she is living in after her home in Tripoli was confiscated by the government, Toughi told Al Jazeera she was shocked by her arrest.

“Even if I was accused of killing people, there should be procedures that they should have taken with people like myself who have immunity [from prosecution], such as withdrawing the immunity, or preventing me from travelling,” Toughi said.

Toughi said her initial complaint against her under-secretary, Mumar al-Dawai, came after she was threatened by him for pushing back against corruption she alleges he committed.

The minister was eventually found not guilty after a government investigation, which reported that there was no reason for her to not resume her work. However, she is still unable to as Salama el-Geual, who was temporarily appointed as her replacement, has not stepped down, and the government has not officially commented on her case.

El-Geual’s refusal to leave office echoed the events of Toughi’s initial appointment to the position in March last year, when the previous minister refused to hand over the ministership. As a result, Toughi was the final minister to start her job.

“It’s racism, they can’t imagine a Black woman from the south being in a leading position in this country,” said Toughi. “They also put similar pressure on the previous minister appointed from my community.”

Al-Dawai, el-Geual, and the office of the public prosecutor did not respond to requests for comment from Al Jazeera.

Toughi belongs to the Tebu community, a Black minority ethnic group who mainly live in southern Libya, as well as Chad, Sudan and Niger.

They have long been discriminated against and excluded from public life, and before the 2011 revolution, many Tebu had their citizenship revoked by the regime of former President Muammar Gaddafi.

“Gaddafi’s attempts at installing an Arab political system in [neighbouring] Chad in the 1970s and early 1980s failed, because of the Chadian Tebu who fought fiercely against that political project,” Khalid Wahli, a former member of Libya’s constitutional committee representing the Tebu, told Al Jazeera.

According to Wahli, who is also the founder of al-Aman, an anti-racism and anti-discrimination group in Libya, this led to Gaddafi considering all Tebus as enemies.

It was, therefore, not surprising that the Tebu people were among the first to revolt against Gaddafi in 2011.

Their role in the revolution led to the community having a more prominent role in Libyan national politics in the years that followed.

But that did not last long.

In 2015, for example, a number of Tebu families in Libya’s southern al-Kufra district were forced to relocate because a university was moved from a Tebu-majority area to an Arab-majority area, leaving students unable to attend.

A deadlier event was an August 2019 air attack committed by military commander Khalifa Haftar’s forces, which hit a Tebu wedding in the southwestern city of Murzuq, and killed more than 45 people.

“Toughi’s story is a clearly racist case, it’s part of the wider racism that the Tebu people face,” Wahli said. “The prime minister himself does not want to do anything to allow her back to her position.”

“Less of a citizen”

Toughi was the subject of racist abuse on social media, and even on mainstream media, following her suspension.

“They called me a slave, and on a national television channel they called me Nigerien and Chadian, in an attempt to make me a less of a citizen,” said Toughi.

NGOs report that Tebu face racism and discrimination because of their generally darker skin colour.

Africans from sub-Saharan countries, many of whom were trying to cross the Mediterranean into Europe, have been sold at auctions across Libya.

For Toughi, the lack of sympathy was particularly shocking, as she said that her children had been threatened as well.

“I was worried about my children following his [al-Dawai’s] threats,” said Toughi. “Former ministers could not bear that amount of pressure, but I stayed and resisted so they put me in jail.”

Toughi is now unable to travel to Istanbul to see her sick husband and children, or to travel to Sabha, in southern Libya, to visit her siblings and to observe Ramadan with them, after the public prosecutor confiscated her passport.

That is despite backing from Libya’s justice minister.

“Her arrest was unlawful, there was supposed to be a procedure before stopping any constitutional person [a member of the national committee that worked on the Libyan constitution], for example withdrawing her immunity and preventing her from travel” said Halima al-Bousifi, in a televised meeting of the cabinet a few days after Toughi’s arrest.

Libya’s southern tribes have also backed Toughi, with a group representing them issuing a statement condemning her arrest and suspension, labelling the events as evidence of racism in the Libyan government.

“I believe an injustice has been committed by not letting her resume her work after the investigative committee found her not guilty,” Sami El-Atrash, a Tripoli-based human rights lawyer, told Al Jazeera.

“They handed over their report to the prime minister who hasn’t released an official statement, it’s now a political decision, there’s no case against her.”

Now, with rival administrations vying over control of Libya, Toughi warns that the racism she experienced has pushed many Tebu away from the government she represents, towards rival forces based in Libya’s east.

“What has happened to me has made many people in my community in the south change their loyalties,” said Toughi. “[They may now support] the government in the east.”