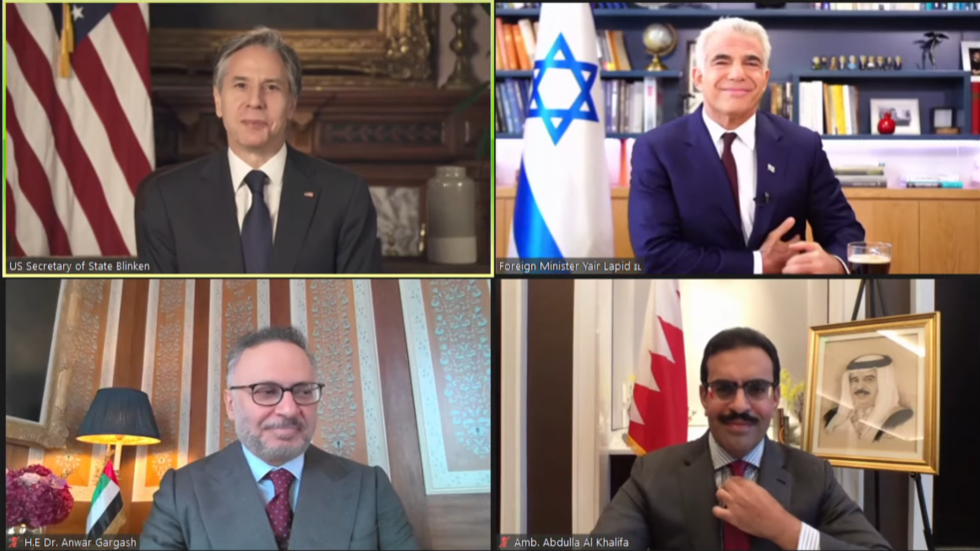 US Secretary of State Antony Blinken called on more countries in the Arab world to normalize diplomatic ties with Israel, offering rare praise to Trump’s diplomacy as he marked one year since the signing of a landmark peace deal.

Speaking at a virtual meeting on Friday with his counterparts from Israel, Bahrain, Morocco and the United Arab Emirates (UAE), Blinken promised that Washington would help foster the fledgling diplomatic relationship between these countries, and called for more normalization of Arab-Israeli relations.

“We will encourage more countries to follow the lead of the Emirates, Bahrain and Morocco,” he said. “We want to widen the circle of peaceful diplomacy.”

The meeting took place on the first anniversary of the signing of the Abraham Accords, which formally established diplomatic relations between Israel, the UAE and Bahrain last September. Israel and Sudan normalized diplomatic ties several weeks later, while Morocco recognized Israel that December.

The Abraham Accords were mediated by former President Donald Trump’s administration and seen as one of his signature diplomatic achievements. Though partisanship is rife in Washington, support for Israel is one issue on which both Democrats and Republicans see eye to eye, and it is unsurprising that Blinken praised Trump for negotiating the agreements.

“This administration will continue to build on the successful efforts of the last administration to keep normalization marching forward,” he said during Friday’s meeting.

Also speaking at the meeting was Israeli Foreign Minister Yair Lapid, who said that he would visit Bahrain later this month, the first such visit by an Israeli foreign minister. “We have to also mention the fact that this Abraham Accords club is open for new members,” Lapid remarked, hailing what he called “this new era of cooperation and friendship.”

For Blinken, the conviviality of Friday’s event was likely a welcome change of pace. As of late, Blinken has weathered intense criticism over the Biden administration’s bungled pullout from Afghanistan, which saw the military withdraw before civilians, only to return and oversee an evacuation from a crowded single-runway airport, while the Taliban seized a bounty of US weapons and equipment and took immediate control of the country, and while some American citizens were left behind and 13 US troops lost their lives in a suicide bombing.

Anger at Blinken was bipartisan. At a Senate Foreign Relations Committee hearing on Tuesday, committee chair Sen. Bob Menendez (D-New Jersey) told Blinken that the withdrawal was “clearly and fatally flawed,” and warranted a “full explanation.” The committee’s top Republican, Senator James Risch of Idaho, called the withdrawal a “dismal failure” and accused the Biden administration of “ineptitude.”