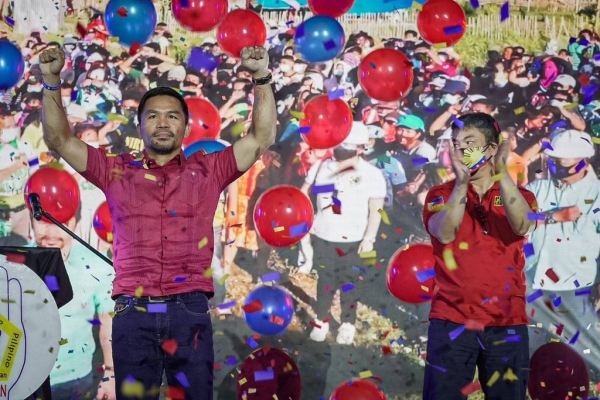 Boxer Pacquiao to run for Philippine president in 2022

Boxing star Manny Pacquiao on Sunday announced he will run for president of the Philippines in the 2022 elections.
He officially accepted the nomination to be standard-bearer of the PDP-Laban camp which he co-leads with Senator Aquilino "Koko" Pimentel III.

"I am a fighter, and I will always be a fighter inside and outside the ring," the boxing icon said during his nomination speech at the PDP-Laban group's national assembly.

Responding to critics questioning his qualifications to run for the top government post, Pacquiao said having experienced poverty himself will better equip him to lead the nation.

Pacquiao first won a seat in the House of Representatives in 2010 as a congressman representing the province of Sarangani. He was re-elected in 2013, before he ran and won a senatorial post in the 2016 elections.During the assembly, the PDP-Laban faction gave him the authority to choose his running mate and members of their senatorial slate for the upcoming polls, but he has yet to announce names.
Add Comment