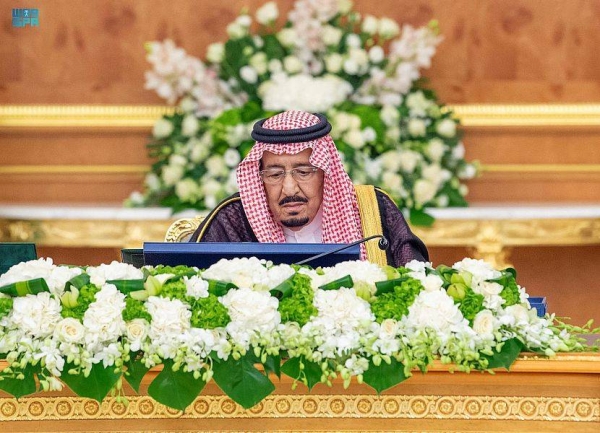 The Cabinet, chaired by Custodian of the Two Holy Mosques King Salman on Tuesday afternoon at Al-Salam Palace, applauded Crown Prince Mohammed Bin Salman’s announcement regarding the National Aspirations and Priorities for Research, Development, and Innovation (RDI) for the next two decades.
These aspirations and priorities are: Health and Wellness; Sustainable Environment and Supply of Essential Needs; Energy and Industrial Leadership; and Economies of the Future, and will enhance the Kingdom’s global competitiveness and leadership, in line with the directions of Saudi Vision 2030, and strengthen the Kingdom's position as the largest economy in the region.

The Cabinet also appreciated the efforts of workers and volunteers in all governmental and private sectors, who contributed to the success of this year’s Hajj season, as this is an extension of Allah’s blessings on this holy country for serving the Grand Mosque and the Prophet’s Mosque and providing comfort and safety for their visitors through a system of advanced services with the latest technologies and the highest quality standards.

At the outset of the session, the Cabinet was briefed on the content of the recent talks that took place between Saudi Arabia and a number of countries, including letters received by Custodian of the Two Holy Mosques from the leaders of the Sultanate of Oman, the Kingdom of Bahrain, the State of Qatar and the Republic of Tajikistan, as well as the phone call received by the Crown Prince from the Russian president.

The Cabinet touched upon the content of the meeting between Custodian of the Two Holy Mosques and the US president, who paid an official visit to Saudi Arabia, in addition to the discussions that took place between the Crown Prince and the US president, during which they reviewed aspects of the strategic partnership between the two countries for the coming decades, with the aim of enhancing their common vision towards a more peaceful, secure, prosperous, and stable Middle East.

The Cabinet within the same context addressed the 18 agreements and memoranda of cooperation concluded during the visit of the US president to Saudi Arabia, covering the fields of energy, investment, communications, space and health. It also dealt with the meeting of the leaders of the Gulf Cooperation Council and the United States of America, which included an affirmation of the common determination to enhance cooperation, coordination and consultation among their countries in all fields.

This is in addition to what the Jeddah Security and Development Summit, which was held with the participation of the leaders of the GCC, Jordan, Egypt, Iraq and the United States, and focused on aspects of regional security, food security, environmental challenges, and joint projects among the countries of the region.

In a statement to the Saudi Press Agency (SPA), Minister of State, Cabinet's Member for Shoura Council Affairs and Acting Minister of Media Dr. Essam Bin Saad Bin Saeed said that the Cabinet praised the results achieved during the visit of the Kazakhstan president to Saudi Arabia and his talks with the Crown Prince, including their affirmation to expand the scope of bilateral relations.

It also lauded the signing of a number of agreements and memoranda of cooperation in various fields, and emphasizing joint coordination towards regional and international issues.

The Cabinet then reviewed the outcomes of the meetings of the foreign and finance ministers and central bank governors of the G20, held in Bali, Indonesia, reiterating Saudi Arabia’s keenness to enhance collective efforts aimed at building bridges with regional and international organizations, in order to increase the effectiveness of joint work towards inclusive and sustainable growth and recovery.

The Cabinet stated that Saudi Arabia’s presidency of the UN Office for the Coordination of Humanitarian Affairs (OCHA) Donor Support Group between July 2022 and June 2023 comes as a consolidation of its position among the world’s leading countries in providing development and humanitarian aid.

It expressed the hope that the strategic plan that will be implemented during the Saudi presidency will contribute to expanding the donor base, accession of new members and strengthening the coordination of the humanitarian response and the delivery of aid.

The Cabinet commended the outcomes of the Five-Year Committee’s meeting on Yemen, which includes Saudi Arabia, Oman, the UAE, the UK and the US, as the committee stressed the importance of the continuation of the truce between the Yemeni parties, and provided full support for the efforts of the United Nations Special Envoy and continued support for the UN humanitarian response plan.

At local level, the Cabinet affirmed the state’s keenness to take into account the neediest citizens in the face of the effects of global prices rise, where the state allocated SR20 billion as a financial support and took measures to control the availability of products and price levels, protect and encourage fair competition, and combat and prevent monopolistic practices.

The Cabinet authorized the Minister of Foreign Affairs to hold talks with the Rwandan side regarding a draft memorandum of understanding on political consultations between the Foreign Ministries of Saudi Arabia and Rwanda.

The Cabinet approved a protocol to amend and extend the agreement concluded between the government of Saudi Arabia and the US government regarding cooperation in the field of science and technology.

It approved a cooperation agreement between the government of Saudi Arabia and the government of Iraq in the field of maritime transport. It also approved the organizational arrangements of strategic office for development of Al-Baha region.