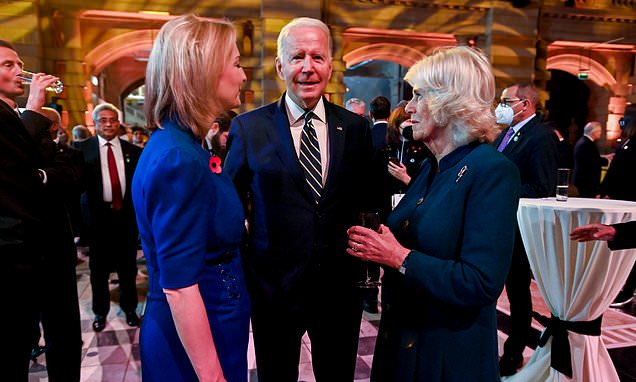 President Biden produced a little natural gas of his own at the COP26 summit in Glasgow and it was audible enough to make the Duchess of Cornwall blush.

Adding to gas emission while advocating to reducing it


He is supposed to be committed to reducing emissions – but when President Joe Biden produced a little natural gas of his own at the COP26 summit, it was audible enough to make the Duchess of Cornwall blush.

An informed source has told The Mail on Sunday that Camilla was taken aback to hear Biden break wind as they made polite small talk at the global climate change gathering in Glasgow last week.

'It was long and loud and impossible to ignore,' the source said. 'Camilla hasn't stopped talking about it.'

The President met the Duchess during a reception on Monday at the Kelvingrove Art Gallery, attended by Prince Charles, the Duke and Duchess of Cambridge and Boris Johnson.

Just hours earlier, the 78-year-old – nicknamed 'Sleepy Joe' by Donald Trump – had appeared to doze off during the opening addresses, prompting more questions from his political rivals over his fitness for office.

This is not the first time that Biden has faced claims that he broke wind. In May 2020, Republicans, including Donald Trump Jr, posted a video clip of Biden containing a suspicious noise while live-streaming an exchange with Pennsylvania Governor Tom Wolf.

mike 27 days ago
I believe the gas was produced by his brain.

mike williams 27 days ago
Everyone farts; Middle Schoolers laugh and talk about it.

Kevin 27 days ago
He’s an international embarrassment not only do we mock him here, the entire world does as well
View all comments (4)Add comment