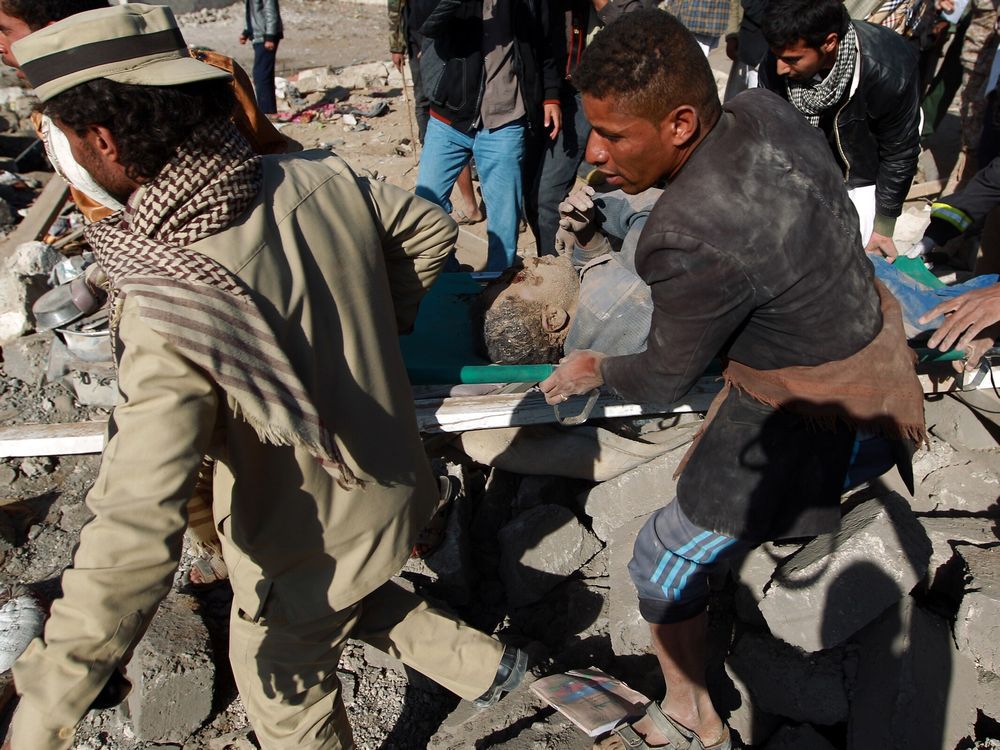 'So long as the arms continue to flow, this war is just going to get worse,' says one expert.
Foreign policy is not typically a ballot box issue in Canada, and this election is no exception: Canada’s role in the world has thus far received little attention on the hustings. However, as former members of Parliament from four of Canada’s five major political parties, we find ourselves in agreement on a pressing foreign policy issue that must transcend party lines: Ending Canada’s arms exports to Saudi Arabia must be a priority of the next government, regardless of its political stripe.

We add our voices to a chorus of civil society organizations who have repeatedly raised legitimate concerns about the serious ethical, legal, human rights and humanitarian implications of these exports.

The bulk of Canadian arms exports to Saudi Arabia are light armoured vehicles, or LAVs, manufactured by General Dynamics Land Systems-Canada in London, Ont. In 2014, the Canadian government brokered the sale of hundreds of LAVs to the Saudi armed forces. Worth an estimated $14 billion, this arms contract is the largest in Canadian history. Arms transfers to Saudi Arabia now account for an overwhelming majority of Canada’s total non-U.S. military exports.

Saudi Arabia has a dismal human rights record, both at home and abroad. Domestically, Saudi authorities repress dissidents, women’s rights activists, and independent clerics. Internationally, Saudi Arabia has, since 2015, led a coalition in a military intervention in Yemen, where it seeks to prop up the government of President Abed Rabbo Mansour Hadi, engaged in armed conflict with Houthi rebel forces reportedly linked to Iran.

Since the Saudi-led coalition began its intervention, it has been widely condemned for serious and repeated violations of international humanitarian law, including the deliberate targeting of civilians using weapons supplied by many of the world’s major arms exporters. The Houthi record is no better and certainly merits condemnation. But it is Saudi Arabia that Canada is arming.

Last Wednesday, a report by the UN Group of Eminent Experts on Yemen named Canada, for the second year in a row, as one of several world powers helping to perpetuate the Yemeni conflict by continuing to supply weapons to the Saudi-led coalition. Ardi Imseis, a professor of law at Queen’s University and member of the expert group, has said, “So long as the arms continue to flow, this war is just going to get worse.”

Sept. 17 marks the second anniversary of Canada’s accession to the Arms Trade Treaty, a landmark multilateral agreement that aims to regulate the international transfer of weapons to reduce civilian harm during conflict. As a State Party, Canada must ensure that Canadian weapons are not used to target civilians. And yet Canada continues to export armoured vehicles to Saudi Arabia despite extensively documented domestic human rights violations and Saudi involvement in the conflict in Yemen — in contravention to its legal obligations.

After six years of war, Yemen is one of the world’s worst humanitarian crises. An estimated 20.1 million Yemenis are in need of humanitarian assistance, 16.2 million face acute food insecurity, and more than five million are on the brink of famine. All actors in the Yemen conflict have played a role in creating the current situation, including foreign governments that have sustained the violence by supplying arms.

Canada has a role to play in bringing peace to Yemen as well as a legal obligation to comply with domestic and international export controls. The next government of Canada should follow in the footsteps of several European countries and immediately suspend arms exports to Saudi, expand humanitarian assistance to Yemen, and play a diplomatic role in bringing an end to this brutal conflict.
Add Comment