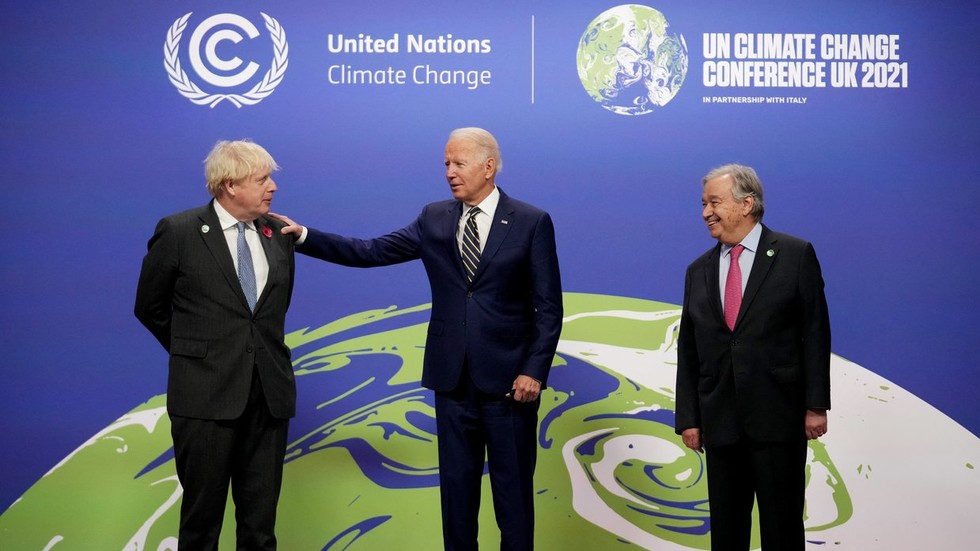 COP26 will be a heady mix of climate hysteria, fear-mongering, and quasi-religious worshiping at the altar of ‘The Science’

From every corner of the planet, private jets – responsible for 50% of all aviation emissions – have flown into Glasgow for the annual ‘Conference of the Parties’ (COP26).
As a participant at several UNFCCC conferences, I am proud that methodologies I created, funded, and advanced for more than a decade have helped make a difference in mitigating the impacts of climate change. Over the years, trillions of dollars have been deployed on climate change mitigation. But this latest gathering is a grotesque hypocritical charade.

The COP26 is the 26th meeting of the Conference of the Parties. This meeting of ‘world leaders’ represents the nearly two hundred countries that are members of the United Nations Framework Convention on Climate Change (UNFCCC). The participants gather to virtue-signal and create non-binding commitments, like the Paris Climate Agreement, without any independent verification of carbon compliance to these commitments, making ‘greenwashing’ a high probability.

This year's host of COP26 in Glasgow, UK Prime Minister ‘Blah, Blah, Blah’ Boris Johnson has promoted himself in the media with short, catchy phrases. Splashed across this weekend's broadsheets, Johnson ‘blah blah blahed’ about how COP26 is the “last chance to save the planet.” BoJo's other pearls of wisdom included “this is a moment of truth for humanity,” it’s “an opportunity for the world to stop climate change from getting out of control” and a “turning point for the world.”

Recently, Johnson's government released its budget, which is packed with unprecedented spending and record tax increases that will destroy the UK economy. After the budget’s release, Johnson touted the 3P discount off a pint of beer as some semblance of solace. BJ’s message seems to be ‘Let the Plebs drink beer!’

Johnson's budget was bad enough, but he also intends to cripple UK farming with a carbon tax on meat and dairy to ‘save the planet’. The elephant in the room that Johnson's government and the other COP26 participants fail to acknowledge is that China and its third world investments are responsible for 40+% of the world’s Co2 and Co2e global emissions per year. President Xi Jinping is not coming to the COP26 and has stated China will not cut their emissions until 2060. By contrast, the UK is responsible for only 1%. Even if Britain’s cuts got it to net zero, the results, while symbolic, would be statistically insignificant and devastate the UK economy.

The UK needs more knowledgeable ‘experts’ to implement practical climate mitigation solutions that will not destroy the economy. Sadly, Johnson’s comments are simply virtue-signaling, curated by his wife and Number 10's self-appointed PR guru, Carrie ‘Antoinette’ Johnson. The comments are fear-mongering propaganda that provide no solutions and will take a wrecking ball to the UK economy.

The ‘net zero’ objective of COP26 is inclusive of ‘equity’, and under that banner comes a demand to spend $100 trillion more on a Green New Deal (GND). It is neither green, new or affordable. It is an extension of the credit crisis bailouts for billionaires that began in 2008. Global central banking elites, like Mark Carney, called the 2008 program Quantitative Easing (QE). The US Federal Reserve's Ben Bernanke and Janet Yellen assured the public the extraordinary bailouts were “temporary emergency measures,” but they are still doing QE today. These same elites will shift the blame for incompetent policies while creating fear with another crisis, Covid-19, climate change, a cyberattack or any other crisis that would allow them to print more money and divide the public.

The middle class is staring down the barrel of being taxed right out of existence with hyperinflation. They need to wake up and go on a general strike against this madness. The elites are seeking to control and dictate every aspect of our lives. The food we eat (meat and dairy are now bad), the transportation you take (too much Co2), where you live, how you live and what you can and cannot do – it’s the end of freedom.

Klaus Schwab's World Economic Forum (WEF) has been seeking a Build Back Better ‘Global Reset’ run by plutocrats for decades – and any crisis will do. Schwab's tyrannical ‘reset’ possesses the greatest existential threat to freedom of speech, liberty and democracy in our lifetime. In 2016, Klaus Schwab said in the coming decades “you will own nothing, and you will be happy.” The ideologues describe the GND as a 10-year government-led mobilisation that will radically decarbonize the world, ending the use of ALL carbon-based fuels while simultaneously tackling inequality in society and ensuring “equity and social justice” for all – especially marginalized genders and ethnicities.

Over 60% of the world's electricity is currently generated by burning fossil fuels. These goals are unachievable and would bankrupt the West even faster than their already reckless money printing. The suggestion of a massive redistribution of wealth and ‘reparations’, based on immutable characteristics will only increase tribalism and incite massive civil unrest.
Fear is necessary to manipulate the masses

Mark Carney is now the mouthpiece of the globalists for ‘climate change’. Carney is a globalist: he worked at Goldman Sachs, was the head of the Bank of Canada, the Financial Stability Board and the Bank of England. Carney's economic policies in Canada and the UK inflated the world's most grotesque housing bubbles in history, and they will soon explode. When he was at the helm of the Bank of England, he warned of Armageddon if the UK voted Brexit. Well, it never happened, and Project Fear’s campaign failed, so why believe him now?

The COP26 is different this time. It's not about climate change; it's about politics, power, control and money. Today, we have reached a ‘turning point for the world’, but not as presented by Boris Johnson and Carrie ‘Antionette’. Big tech has become the Ministry of Truth, where you are censored if you do not accept and repeat the narrative. Twitter suspended me for speaking the truth, which according to Jack Dorsey's moderators, is against community standards. What community? Dorsey's ‘community’ propagandists at Twitter would make Joseph Goebbels blush.

We have outright media dishonesty advancing propaganda narratives designed to facilitate political agendas by activists masquerading as journalists. The truth no longer matters, and the world is suffering from an ongoing barrage of government-sponsored psychological operations deployed against its citizenry.

A fearful public is an obedient public. This Chinese-style censorship by big tech is pure evil. I have warned about this (here, here and here) and its foreshadowing of an authoritarian dictatorship.

Greta Thunberg is the poster child for classroom indoctrination, climate alarmism and instilling fear in children, making them believe that the world is ending, and we are all dying because of fossil fuels. It's disgraceful how governments and corrupt media allow children to be indoctrinated with critical theory and climate propaganda.

If you question climate change ‘science’, you are a climate ‘science’ denier.

‘Trust the science’ has become a meaningless slogan. If you challenge a hypothesis, you are a science denier. When you are not allowed to question science, it is no longer science; it’s propaganda.

If you challenge the speech police’s use of pronouns or dare say that a trans woman is a biological male, you are transphobic.

If you challenge any of the dictates of the LBGTQIA+ community, you are homophobic.

If you fail to acknowledge critical race theory or to denounce your white privilege, you are a racist.

If you criticize the BLM and ANTIFA violent riots, looting, and arson that caused billions in damage and destroyed small businesses, you are a racist.

If you criticize acts of terrorism committed by radical Islamic fanatics, you are Islamophobic.

If you criticize your local school board for teaching your children ideologies you disagree with, you may be considered a domestic terrorist by the FBI.

The penalties for the above: total censorship, loss of employment, and being shunned by polite society.

The world's standard of living is collapsing, hyperinflation has arrived, and the elites will claim that censorship, oppression, medical tyranny, a social credit scoring system and the end of all freedoms are necessary for society's well-being and survival. Strikes have already begun in the USA (here and here). The time has come for the silent majority to wake up and resist this madness.
#boris johnson  #covid 19  #johnson  #covid
Add Comment