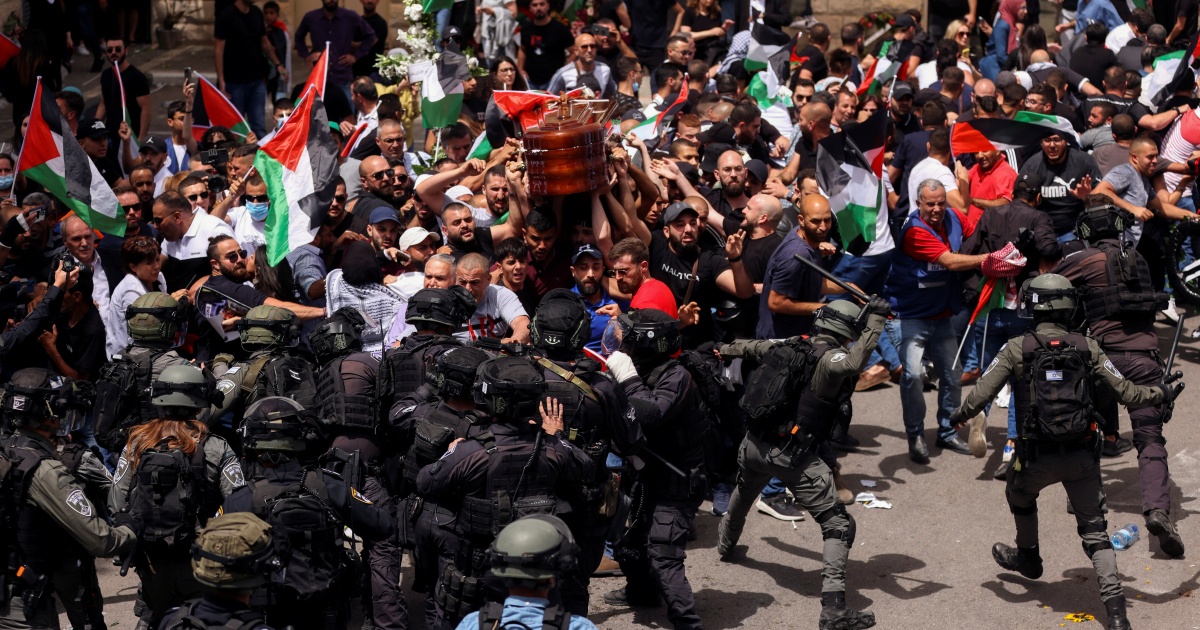 Thousands gathered in occupied East Jerusalem for the Al Jazeera journalist’s funeral after she was shot dead by Israeli forces.

Attacks by Israeli forces on mourners of Al Jazeera journalist Shireen Abu Akleh have sparked condemnation, with the United Nations and the United States describing the scenes as “deeply disturbing” – although the US stopped short of explicitly condemning Israel for the violence.

Thousands of people gathered in occupied East Jerusalem on Friday for the funeral of the veteran Al Jazeera journalist, two days after she was shot dead by Israeli forces while covering a raid in the occupied West Bank.

The Jerusalem Red Crescent said 33 people were injured in the attacks and six were hospitalised. Israeli authorities said six people were arrested after mourners threw “rocks and glass bottles”.

UN Secretary-General Antonio Guterres said he was “deeply disturbed” by the violence, according to a spokesman.

The European Union said it was “appalled by the violence in the St Joseph Hospital compound and the level of unnecessary force exercised by Israeli police throughout the funeral procession”.

Secretary of State Antony Blinken said the US was “deeply troubled to see the images of Israeli police intruding into her funeral procession today … Every family deserves to be able to lay their loved ones to rest in a dignified and unimpeded manner”.

She said the focus should have been on “marking the memory of a remarkable journalist who lost her life”.

“We regret the intrusion into what should have been a peaceful procession,” she added.

But when US President Joe Biden was later asked by reporters whether he explicitly condemned the Israeli actions at the funeral, he said: “I don’t know all the details, but I know it has to be investigated.”

On Saturday, the foundation of late South African Archbishop Desmond Tutu, a Nobel Peace Prize winner, said scenes of Israeli police attacking the pallbearers were “chillingly reminiscent” of what happened during the funerals of anti-apartheid activists.

Al Jazeera said in a statement that the Israeli police’s attack on the funeral procession “violates all international norms and rights”.

“Al Jazeera Media Network denounces this violence in the strongest terms, and holds the Israeli government fully responsible for the safety and security of all the mourners and the family of our colleague Shireen.”

Al Jazeera also said that “such violence will not deter it from reporting the truth”.

The UN, EU and the UN have backed calls for a full investigation into Abu Akleh’s killing.

Saleh Hijazi, deputy regional director for Middle East and North Africa at Amnesty International told Al Jazeera that the attack is “consistent with policies and practices of Israeli apartheid against Palestinians whenever they want to repress and oppress freedom of expression, social and cultural rights.

“The record of Israeli investigations show that there is no will nor ability to investigate violations of crimes when it comes to Palestinians.”

The Palestinian Authority has rejected Israeli calls for a joint investigation, calling Israel an “occupying authority”.

Diana Buttu, a human rights lawyer, told Al Jazeera at the funeral that Abu Akleh was widely revered by Palestinians over her coverage of life under Israeli occupation, and that the Israeli violence against mourners underlined her influence.

“So many people loved her and continue to love her [for] the strength of her reporting but also the love for Palestine,” Buttu said.

“People know that what Israel is doing is a war crime. She cared about how the occupation affected lives, telling people what the occupation means on a personal level. She genuinely loved people and was outraged by the Israeli occupation.”