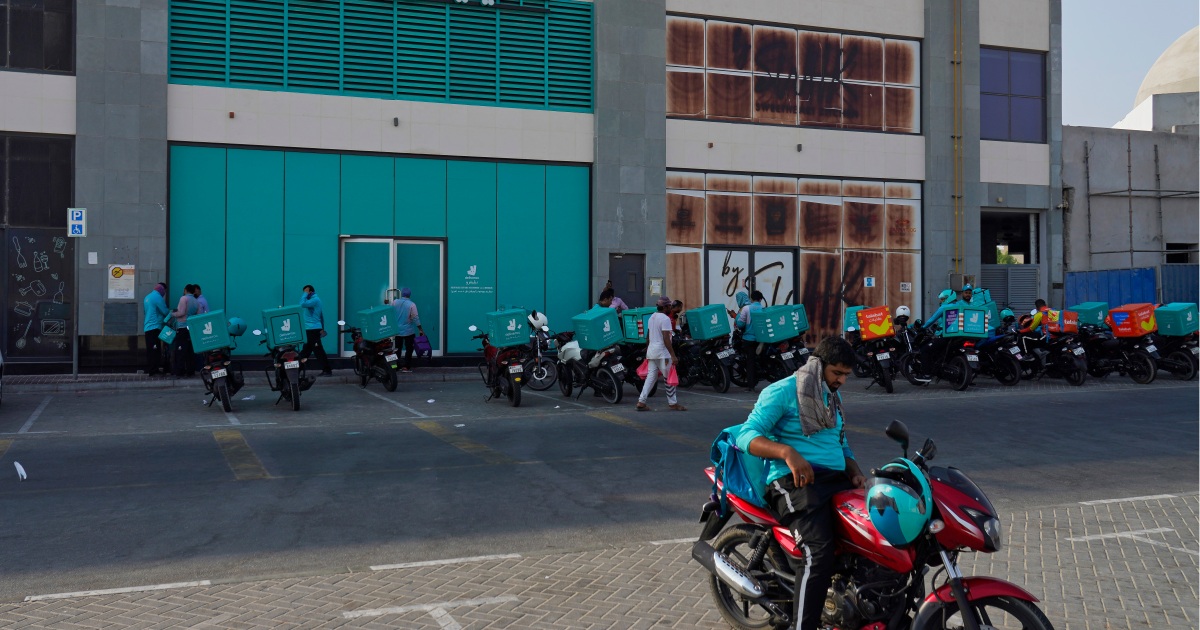 Food delivery workers went on strike against long work hours and decreased pay, forcing Deliveroo to back down.

Hundreds of Deliveroo riders went on a strike in Dubai to protest against pay cuts and long working hours, forcing the company to backdown.

The strike on Sunday, a day which is also marked around the world as International Labour Day, or May Day, disrupted deliveries from the app-based food delivery company’s restaurant partners to their customers.

Deliveroo has now stepped back from its attempted changes, and said on Monday that they had been “paused”.

Late on Sunday, Deliveroo sent an email to its restaurant partners saying that it was “facing an issue” with riders, who were “striking and refusing to attend their shifts and deliver orders”.

“Rest assured our team is working closely to resolve this issue as quickly as possible while continuing to protect Deliveroo rider earnings,” the email added.

Videos circulating on social media showed Deliveroo riders in their company’s trademark turquoise shirts milling about in an open area, protesting against what they said were fuel price hikes, lower pay, and lack of benefits.

“They are not providing us our legal rights according to law and decreasing rates while petrol prices are going up every month,” said Naeem Iqbal, a Deliveroo rider, on Twitter.

Iqbal said the number of working hours had also increased to 11 or 12 hours a day.

The drivers said Deliveroo’s policies were in violation of the United Arab Emirates’ labour law, citing the lack of severance pay and health insurance, visa costs, and no flight ticket home after two years of work.

According to the amended labour law, the maximum working hours for an employee is eight hours a day, or 48 hours per week.

Riders say Deliveroo had told them that the new rate per order was 8.75 dirhams ($2.4). Before May 1, the rate was 10.25 dirhams ($2.8). Some riders also shared screenshots of their 13-hour work schedules, and complained that they pay for fuel from their own pockets.

The strike proved to be successful, forcing Deliveroo to revert its policies back to what they were before the riders took action.

“We have always ensured that Deliveroo riders are competitively compensated and Deliveroo is proud to continue to be among the highest paying aggregators in the marketplace,” Deliveroo told Al Jazeera in a statement on Monday.

“Our initial intention with the announcement was to propose a more well-rounded structure for rider earnings in addition to other incentives. It is clear that some of our original intentions have not been clear and we are listening to our riders.”

Deliveroo added that it would work with riders to find a “structure that works for everyone”.

The strike is not the first time that Deliveroo has been accused of exploiting its workers. Last year, Deliveroo riders in London went on strike and called for a guaranteed living wage, an end to over-hiring and unpaid waiting times, as well as the right to holidays and sick pay.