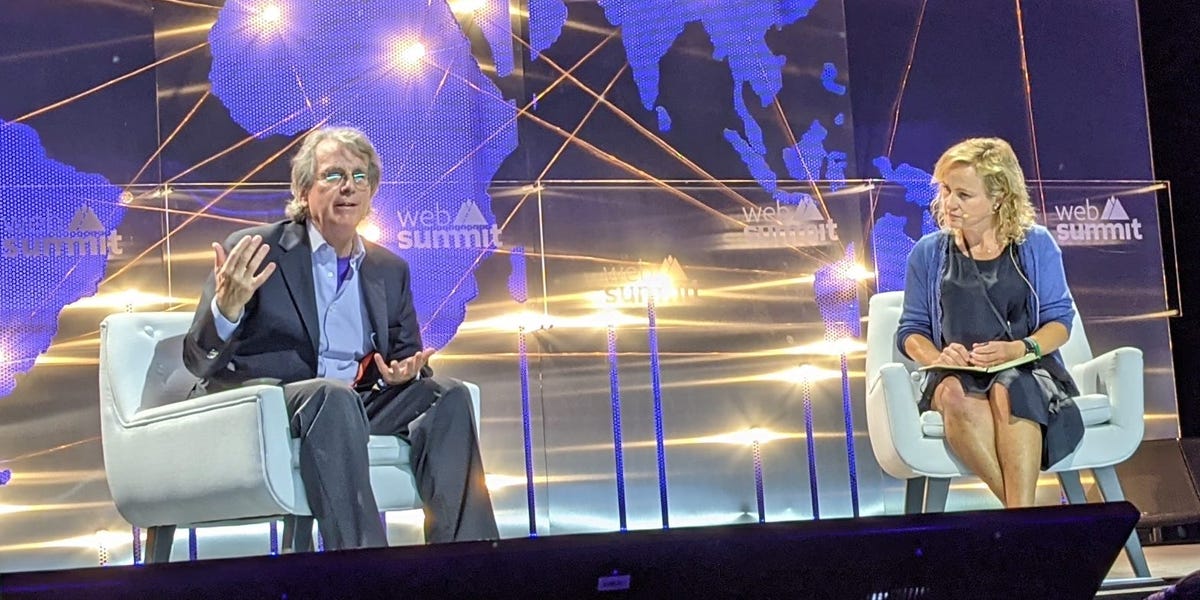 Longtime Facebook investor and Zuckerberg mentor Roger McNamee called for criminal probes into the company at Web Summit. His call, echoed by others, shows the tech world is in open revolt against its leading platforms.
When longtime Facebook investor Roger McNamee took the stage and called for six different criminal investigations into Facebook, and prison sentences for any executive found responsible, it became obvious that this year's Web Summit would be different from previous iterations of the annual Lisbon-based tech conference.

Normally, Web Summit is a largely apolitical gathering of tech startup founders, software nerds, hackers, and the venture capitalists who want to give them money.

The conference is huge — 80,000 people in some years — and it sprawls across four days on the shoreline of the Portuguese capital. Usually, the chatter is of initial public offerings, "scaling," valuations, and "exits".

Not this time. The tech world is now in open revolt against its own big platforms. This year, Facebook is public enemy no.1. Social media is now the devil. Much of the chatter among attendees is about how to kill social media, regulate Google, or detour around them both.

The conference was officially opened by Facebook whistleblower Frances Haugen, who told the 20,000-capacity audience at the centre stage that Facebook CEO Mark Zuckerberg should step down.

"They were putting lives in jeopardy … Facebook is currently prioritising content in the news feed that has a side effect of prioritising and amplifying the most extreme and divisive content," she said.

She cited Ethiopia as an example. It is currently enduring a civil war that may topple its government.

The "most fragile" countries don't have artificially intelligent moderation that can remove toxic content automatically, because Facebook prioritizes English and its American users over everyone else, she said.

In Ethiopia, "where ethnic violence is happening right now," there are 100 million people who speak six languages and 95 dialects. Content moderation "doesn't scale to the most fragile places in the world."

Attendees gave her a huge round of applause.

The next day, McNamee did a fireside chat with Guardian journalist Jane Martinson in front of an audience of about 1,000. McNamee has been complaining about Facebook for years, of course.

But Haugen's leak of thousands of internal Facebook documents to The Wall Street Journal and other news outlets has given McNamee a new moment in the spotlight. McNamee's Elevation Partners invested $210 million in Facebook before it went public in 2011. McNamee only began to sell his stake in 2019, according to the New Yorker.

Between those two times, the value of Facebook roughly quadrupled. At one time, he was Zuckerberg's mentor.

"I think there are at least six areas where felony investigations are warranted," he told the audience:

The US Securities and Exchange Commission should look at Facebook's failure to disclose information about its business.

* Facebook's management was "complicit" in the "Stop the Steal" campaign which led to the January 6 insurrection on Capitol Hill.

* The company is the subject of a state attorney general investigation in Texas into whether Facebook worked with Google to fix prices. "The standard penalty for that is three and a half years in prison for all of the executives and it is the clearest cut case of price fixing in the United States in decades," he railed.

(McNamee didn't elaborate on the other two investigations he believes are warranted.)

Before McNamee spoke, soccer legend Thierry Henry told the audience he abandoned all his social media accounts earlier this year because he was tired of the racist abuse he received from them. "When you find that they generate money through hate, it is very difficult when your medicine is your poison," he said.

And in a conversation with Insider, DJ Sam Feldt — who is also the founder of Fangage, a promotional software platform for artists and musicians — said one of his primary motivations for starting the business was his increasing alienation from Facebook.

"At one point, I had a million followers, but I was also realising that, the more followers I got the less people I was reaching because of the algorithms. So my reach is getting restricted by Mark Zuckerberg in Silicon Valley … I would assume if you have a million followers on your Facebook page, the number of people you reach goes up.

"But no, essentially, right now, it's around 2%," he said. "I'm sick of social media, limiting how I can engage with my friends."

In the old days — pre-pandemic — Web Summit visitors used the word "disruption" to describe how they wanted their apps and coding to replace brick-and-mortar industries (think Airbnb vs hotel chains) or legacy cash businesses (Uber vs taxis).

This year, in conversations with half a dozen attendees at the conference, the same theme kept coming up: How to disrupt Facebook and Google. Or abandon them, or undermine them, or avoid them, or block them, or otherwise replace their businesses with more ethical software.

Sridhar Ramaswamy, the former senior vice president of ads and commerce at Google, told Insider of the day in late 2017 when he realised he wanted to quit after 15 years there. A tabloid newspaper had published a headline blaming YouTube for running ads against child pornography.

He was careful to add that he did not believe the tabloid story was accurate. However, he was sick of defending Google: "You want to have dignity in your work," he said.

Ramaswamy is now the cofounder and CEO of Neeva, a subscription-only search engine that offers a more private, ad-free service drive by quality rankings, not engagement.

Engagement is the problem, not the solution, he said. Engagement-based ecosystems reward the worst actors on any platform, because their awful behaviour gets the most attention."It's this combination of the relentless drive for attention that the ad model produced. A never-ending quest for more time and more attention."

In a quiet conversation backstage after his speech, McNamee told Insider that engagement coupled with anonymity were the two chief poisons delivered by social media.

"Historically, anonymity has given trolls enormous power relative to their numbers … [and yet] you can target them perfectly [with ads]. And then you create economic incentives for the most emotionally extreme voices, right?"

Nick Clegg, the former UK deputy prime minister and now vice‑president for global affairs at Facebook's corporate parent Meta, appeared at the conference via video screen to defend the company.

Facebook didn't want hate-mongering on its platform any more than anyone else, he said. "The people who pay to generate those ads — advertisers — they do not want that content next to us. … users won't continue to use our products if they are getting a bad experience."

"For every 10,000 bits of content you see on the news feed only five will be hate speech," Clegg said.

Haugen, speaking earlier, agreed that only a small number of people on Facebook drive most of the "integrity problems." But that doesn't mean those problems are small, she said, because their engagement is higher than everyone else's.