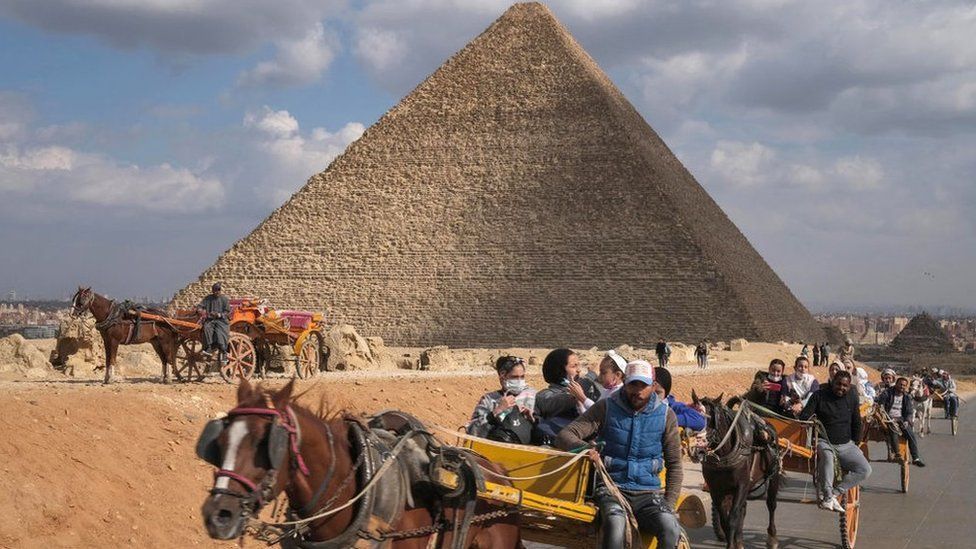 Prosecutors in Egypt have ordered the detention of 13 teenage boys arrested on suspicion of harassing two female foreign tourists at the Giza pyramids.

Egyptians expressed outrage on social media last week after a video showed a group of youths haranguing the young women at the archaeological site.

A prosecution statement said the boys were between 13 and 15 years old.

They have claimed that they only wanted to take photos with the tourists and had not intended to cause any distress.

The boys would be held at a juvenile detention centre until the investigation had been completed, the prosecution statement said.

It added that a complaint accusing the boys of verbal and physical harassment had been filed by a tourist guide who filmed the video, rather than the women themselves.

In the 35-second clip, the guide can be heard complaining that Egyptian boys are "running after the foreigners" and saying that he wants the tourism minister to be aware.

The boys are seen holding up mobile phones as they crowd around the women, who attempt to get away. One of the women tries to push a boy away after another appears to touch her from behind.

In recent years, dozens of women inspired by the #MeToo movement have spoken out on social media about their experiences of sexual harassment and assault in Egypt.

The country's parliament approved harsher penalties for sexual harassment last year, amending the penal code to make it a felony and increasing the penalty to a minimum of two years in prison instead of six months, alongside a fine of between $6,370 (£4,740) and $12,740 (£9,480).

However, Egyptian authorities have been accused of frequently failing to investigate and prosecute men accused of sexual harassment or assault against women and girls.

A UN study in 2013 found that 99.3% of girls and women in Egypt reported experiencing some form of sexual harassment in their lifetime, and that 82.6% did not feel safe or secure in the street.