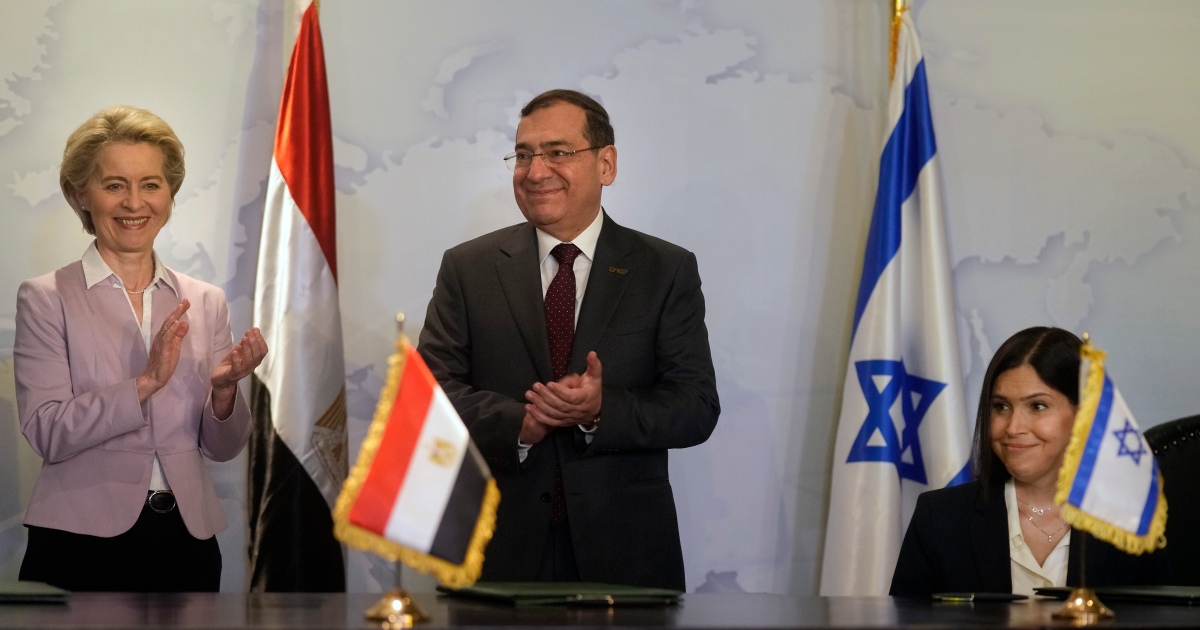 The tripartite agreement will allow ‘significant’ exports of Israeli gas to Europe for the first time.

The European Union, Israel and Egypt have signed a tripartite natural gas export deal as the bloc seeks to diversify away from Russian energy.

The deal, finalised on Wednesday at the East Mediterranean regional energy conference in Cairo, will allow “significant” exports of Israeli gas to Europe for the first time, the Israeli energy ministry said.

“What a special moment,” European Commission chief Ursula von der Leyen said in a joint news conference alongside the Egyptian and Israeli energy ministers. “I very warmly welcome the signing of this historic agreement.”

Von der Leyen said on Twitter that the agreement would contribute to Europe’s energy security.

Last year, the EU imported roughly 40 percent of its gas from Russia. Countries have been struggling to reduce that dependency in order to sanction Russia over its ongoing invasion of Ukraine.

The signing of the memorandum of understanding in a five-star Cairo hotel comes a day after von der Leyen and Italian Prime Minister Mario Draghi embarked on energy talks with Israeli foreign minister Yair Lapid.

“It is an outstanding step bringing our energy cooperation to the next level,” von der Leyen said on Tuesday while visiting Israel.

The EU Commission chief stressed that the memorandum of understanding would increase the bloc’s “independence,” glossing over its newly-found reliance on Cairo and Tel Aviv, which are both accused of grave human rights violations and war crimes.

Israeli gas will be brought via a pipeline to Egypt’s LNG terminal on the Mediterranean, where some will be liquefied and transported on tankers to European shores.

In January, the EU earmarked 657 million euros ($736m) for the construction of a 2,000-megawatt undersea electricity cable that will link the power grids of Israel, Cyprus and Greece. Von der Leyen said it would be the deepest and longest such cable ever built.

In 2020, Greece, Israel and Cyprus signed a deal to build an undersea pipeline to carry gas from new offshore deposits in the southeastern Mediterranean to continental Europe.

The proposed project, with a rough budget of $6bn, was expected to satisfy about 10 percent of the EU’s natural gas needs. But it is fraught with political and logistical complexities.

At the time, Israeli officials said the EastMed pipeline would take up to seven years to build.

The pipeline’s construction has not yet begun and the EU is still conducting preliminary evaluations and cost estimations. In April, a US envoy said it was too expensive, not economically viable and will take too long to provide an alternative to Russian gas.

Israel has emerged as a gas exporter in recent years following major offshore discoveries. It has two major gas fields off its coast with an estimated 690 billion cubic metres of natural gas combined and continues to explore for more, including those that lie underneath the disputed maritime border with Lebanon.

Tel Aviv says the Karish field is part of its UN-recognised exclusive economic zone. Lebanon insists it is in a disputed area.