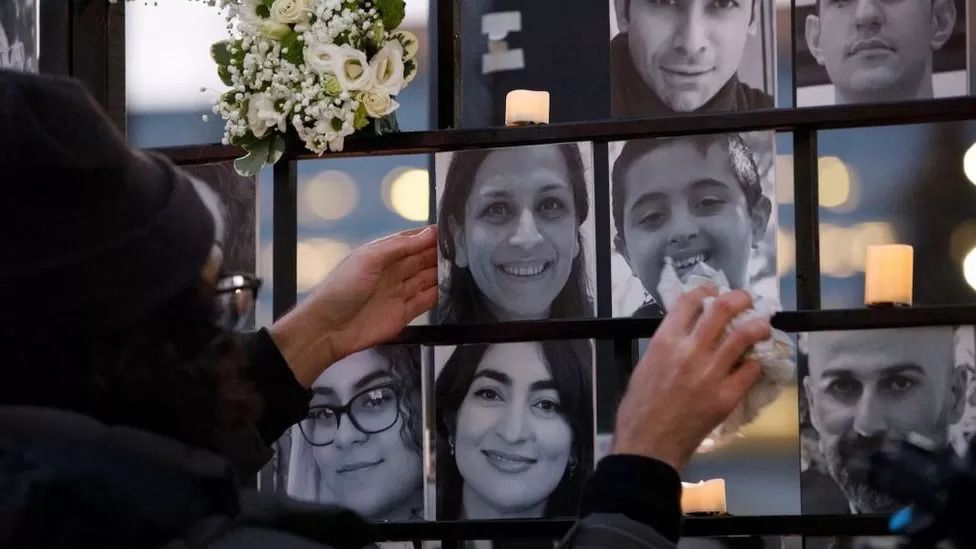 Flight PS752: Calls on Iran to settle dispute over downing of Ukraine jet

A group of four countries led by Canada has requested that Iran submit to arbitration to settle a dispute over its shooting down of a Ukrainian jet.

Ukraine International Airlines flight PS752 was hit by two missiles after taking off from Tehran on 8 January 2020. All 176 people on board died.

The group, made up of Canada, Sweden, Ukraine and the UK, said it was taking "concrete action" against Iran.

The four nations have been seeking reparations on behalf of the families of the victims - many of whom were citizens or residents of those countries.

They accuse Iran's Islamic Revolutionary Guard Corps of having "unlawfully and intentionally" launched two surface-to-air missiles at the jet.

Iran, for its part, said its air defences had been on high alert at the time of the incident after it fired ballistic missiles at two Iraqi military bases hosting US forces amid heightened tensions with the US.

In a joint statement released on Wednesday, the four countries "requested that Iran submits to binding arbitration of the dispute related to the downing of Flight PS752" under a 1971 multilateral treaty on threats to civil aviation.

It said the group remained "committed to pursuing efforts to hold Iran accountable for its multiple breaches of its international legal obligations".
Eighty-five of the

passengers on the flight were Canadian citizens and permanent residents.

"Those who lost loved ones in the downing of PS752 deserve justice," Canadian Foreign Minister Melanie Joly tweeted on Wednesday.

"We have taken an important step to advance our pursuit of that justice at the international level this week and will continue to work together to hold Iran accountable for this tragedy."

Video from the scene shows the aftermath of the crash