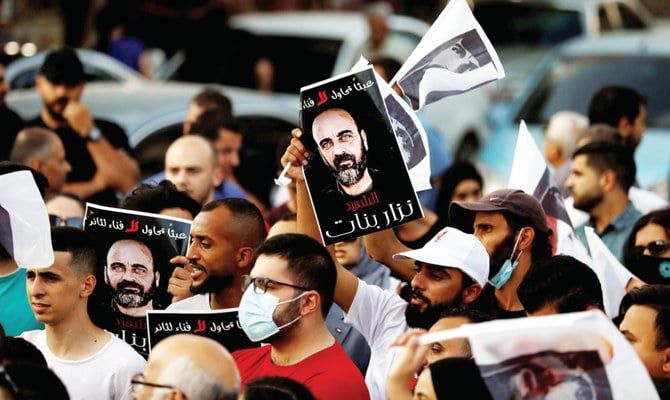 A crackdown on political activists by the Palestinian Authority has been condemned by human rights organizations and increased frustration among factions and popular groups.
The PA security services on Nov. 5 arrested Omar Assaf, the coordinator of the Popular Alliance, and accused him and his group of planning to create an alternative leadership for the Palestine Liberation Organization.

The authority also banned activists from the Palestinian Popular Conference “14 million,” which was due to discuss reform of the PLO by holding elections for its legislative body, the Palestinian National Council.

The shutdown and arrest of Assaf followed a series of detentions of Hamas activists that began late last month across the West Bank.

“Freedom of expression must be protected and guaranteed — whether for political or non-political activists — and they should not be persecuted and intimidated by the Palestinian Authority,” he said.

“No one talked about establishing an alternative body to the PLO. Still, the existing body is fragile and does not exist except in name, and it is required to involve people in its extensive and essential issues, such as the reform of the PLO.”

The Palestinian Authority and the Fatah movement have grown increasingly concerned about Hamas, believing it is attempting to enter the PLO and then control it with the support of leftist factions within the organization.

This would marginalize the role of Fatah, which has led the organization since its establishment in 1965.

“It is time to reform Palestinian institutions and involve people because representation and participation have become an important title for the Palestinian people,” Jabarin said.

He said that local and international human rights institutions were deeply disturbed by the crackdown.

“The recent period was a bad indication that the authorities targeted political activists by arresting them and restricting their freedom of expression,” Jabarin added.

Meanwhile Mustafa Barghouti, the secretary-general of the Palestinian National Initiative, told Arab News: “The political arrests and the prevention of freedom of expression is a big mistake and unacceptable.”

He added that it was agreed during a recent meeting of the Palestinian factions in Algeria to hold elections for the PLO.

Hamas won the last Palestinian elections held in 2006. Since then, no elections have been held, despite promises from President Mahmoud Abbas.

“The People’s Conference to rebuild the PLO moved the stagnant waters toward the election of a new leadership for the organization, as the official media continued to host some representatives of the factions to incite against the conference’s organizers,” Majed Al-Arouri, director-general of the Civil Commission for the independence of Judiciary and Rule of Law, said on Facebook.

He added that it was disappointing for the political leadership of the PLO to fear a popular conference that recognizes the PLO as the legitimate representative of the Palestinian people while seeking democratic reform and elections.

Experts told Arab News that it was not likely that the Palestinian security services will succeed in silencing the critics in the era of social media, where the Palestinians are using online platforms to expose the crimes of the Israeli occupation and the violations of the PA at the same time.

Meanwhile Husam Badran, a member of the Hamas political bureau, criticized the detention of activists and conference ban.

The Popular Front for the Liberation of Palestine, a socialist organization, called for an end to the arrest and suppression of political activists. Islamic Jihad demanded Assaf’s immediate release.
#Facebook
Add Comment