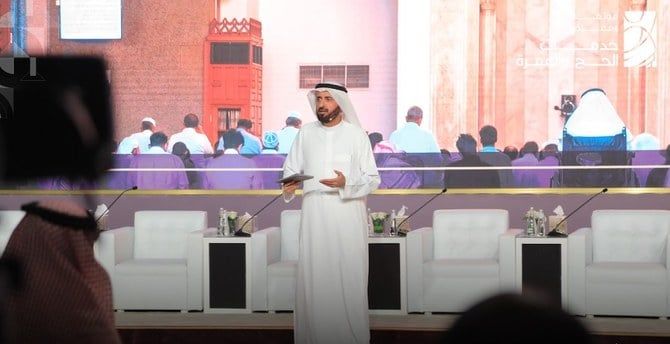 Hajj Expo 2023 is underway in Jeddah

The second edition of the Hajj and Umrah Services Conference and Exhibition was launched on Monday by Makkah Gov.Prince Khaled Al-Faisal, as well as Madinah Gov. Prince Faisal bin Salman bin Abdulaziz, which took place in Jeddah Superdome and will continue for four days.
Organized by the Ministry of Hajj and Umrah, Hajj Expo 2023 is held under the theme: Quality in the Services System.

The Expo gathered 81 speakers from the public and private sectors from inside and outside the Kingdom, including delegations of ministers of religious affairs, heads of Hajj missions, and higher authorities from more than 57 countries.

Hajj Expo 2023 aims to build an integrated and sustainable system that contributes to developing the experience of pilgrims by benefiting from the ideas and visions of specialists, through anticipating future directions, developing opportunities for partnerships, and signing agreements between local and international initiatives, which will accordingly enrich the pilgrim's experience.

During the opening speech of the conference, Tawfiq Al-Rabiah Minister of Hajj and Umrah said, "Serving the pilgrims from all countries of the world is a top priority, an authentic historical commitment, and a great honor that the Kingdom's government is proud of so that the pilgrims can perform their rituals with peace and ease within a rich digitized faith journey."

Al-Rabiah unleashed two exclusive news to the attendees during the conference, the first is that the number of pilgrims in the Hajj 2023 season will return to what it was before the pandemic without any conditions or age restrictions.

He also said that there are several facilities provided to pilgrims, "Umrah visa holders can now visit any city across the Kingdom, and in return holders of all other visas are allowed to perform Umrah, in addition to extending the Umrah visa period from 30 days to 90 days, launching the Nusuk platform and making it available to issue a visa within less than 24 hours electronically"

He also mentioned that work has begun on more than 20 exhibitions and a100 historical sites that document the biography of the Prophet Mohammed PBUH, as these ancient sites are being prepared to host visitors of pilgrims in this Hajj season to enrich their journey.

Al-Rabiah pointed out that Hajj Expo is the largest of its kind, as it includes all stakeholders from inside and outside the Kingdom to facilitate the journey of the pilgrims under one roof.

During the four days, experts and specialists participating in Hajj Expo will discuss ways to develop a road map to enhance and enrich the Hajj journey through 10 main sessions, 13 discussion panels, ‘Hajj Talk’ sessions, and 36 workshops, in addition to many accompanying events and activities such as The Islamic exhibition as well as the ‘Hajj and Umrah Challenge’

On the first day, the opening discussion panel after the conference was entitled ‘Quality and Competitiveness in pilgrim's serving: A Future Vision

The panel included Al-Rabiah, Saleh Al-Jasser, Minister of Transport and Logistic Services, Bandar AlKhorayef Minister of Industry and Mineral Resources, Abdulrahman Al-Sudais General President of the Grand Mosque and the Prophet’s Mosque Affairs and Saleh Al-Rasheed, the CEO of the Royal Commission for Makkah City and Holy Cites.

The opening panel aimed to shed light on the Kingdom’s efforts in serving the pilgrims by discussing the Kingdom’s vision in developing the Hajj and Umrah sector and its aspiration to achieve the highest levels of quality and excellence in the services provided, and the pursuit of its continuity and sustainability.

Al-Jasser said, "Hajj season involves unique transportation and logistics services, as the process of transporting millions of individuals within a specific and short duration, as well as transferring their requirements of luggage and other things is considered an exceptional process because it requires a great effort of planning, cooperation with various agencies and risk management.”

It is worth mentioning that the Kingdom's total investment of the Grand Mosque infrastructure expansion is at a cost of more than SR200 billion. It is the largest construction project in history, and the continuation of work on the expansion of the Prophet's Mosque, and the development of the holy sites. It has also worked on a major expansion of Quba Mosque, in addition to developing facilities and infrastructure according to the best international standards.

He added, “The road network serving pilgrims exceeds 8,800 kilometers, and it may not be available in major countries”

Two brands were launched during the conference by Makkah Governor and Madinah Governor, namely Made in Makkah and Made in Madinah, which are considered an extension of Saudi Made, with the aim of becoming an original source for providing quality products to pilgrims that carry them an unforgettable memory.

Saudi Made is a national initiative launched by the Saudi Export Development Authority and the National Industrial Development and Logistics Program, it promotes national goods and services to become the preferred option internationally.

Al-Khorayef said accordingly, “Makkah has about 2000 factories and Medina has more than 500 factories. These factories work to supply the markets where pilgrims and Umrah performers are provided with all their daily needs products such as food, grocery, and medicine, and in seasons the demand increases on these markets. Therefore, we are keen to consolidate the value of the local product, and through Made in Makkah and “Made in Madinah,” we aim to raise the value and quality of the products available to be worthy of this label, as they were previously used in an unregulated manner.”

During the first day of the Expo, Al-Rabiah signed 57 collaboration agreements with heads of delegations from countries taking part in the event.