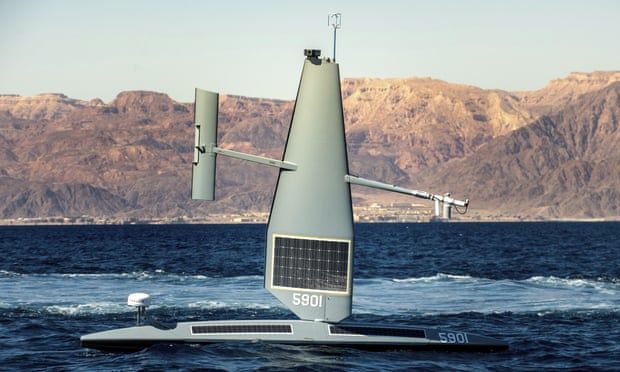 The US has for the second time this week compelled Iran to release US military sail drones that it tried to seize at sea, according to officials.

The US military has not officially commented on the incident. But a US defence official, speaking on condition of anonymity, suggested the Iranians had sought to secretly seize the drones.

The official said an Iranian navy warship pulled two US sail drones completely out of the water on Thursday and then covered them with tarps.

Iran initially denied having any US property before returning them on Friday to the US warships that converged on the scene, a US official said.

Iran has been building up its naval presence in the Red Sea, near the coast of Yemen where Tehran backs the Houthi movement, after sending vessels there more than a decade ago to protect Iranian oil tankers and merchant ships against piracy.

The incident there, after an earlier one in the Gulf, was the latest reminder of military tensions between the US and Iran, even as both countries pursue nuclear talks. They follow exchanges of fire last week between the US troops and Iran-backed groups in Syria.

Earlier on Friday, Iran’s state television said the Iranian navy had released two US maritime drones in the Red Sea but accused the American unmanned vessels of jeopardising maritime safety, without providing evidence.

“The [Iranian navy] frigate Jamaran seized the two vessels on Thursday to prevent any possible accident after issuing warnings to the US fleet. After international shipping lanes were secured, the two vessels were released in a safe area,” the TV said.

Iranian television footage aired on Friday appeared to show more than a dozen Iranian navy personnel pushing two drones into the sea from the deck of their vessel.

On Tuesday, the US navy said it foiled an attempt by Iran’s Revolutionary Guards naval forces to capture an unmanned surface vessel operated by the US 5th Fleet in the Gulf. Iran said the drone was a danger to maritime traffic.

Iran has repeatedly warned the US about its military activities in the Gulf, saying that the Guards’ naval forces have increased patrols to secure the passage of Iranian ships and combat fuel smuggling.

The US military, meanwhile, has expanded its use of sea-based drones in the region.

It is unclear whether Iran might be seizing the US drones in an attempt to copy them. Some of Iran’s drones are based on unmanned aircraft from other countries, and it tried to copy an aerial US RQ-170 Sentinel reconnaissance drone captured in 2011.