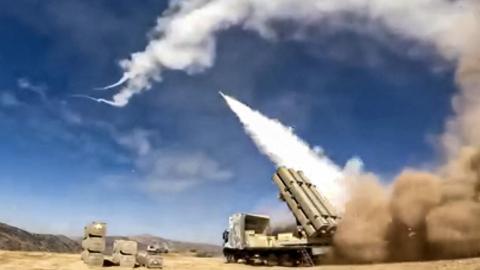 An Iranian general claimed Thursday that the Iranian republic had developed a hypersonic missile capable of penetrating all defense systems, raising concerns from the UN nuclear watchdog.
Hypersonic missiles, which like traditional ballistic missiles can deliver nuclear weapons, can fly at more than five times the speed of sound.

"It will be able to breach all the systems of anti-missile defense," he said, adding that he believed it would take decades before a system capable of intercepting it is developed.

The head of the International Atomic Energy Agency (IAEA) Rafael Grossi, speaking at a UN climate summit in Egypt, expressed concerns about the announcement.

But he added that he does not see this as "having any influence" on negotiations over the Iranian republic's nuclear program.

The announcement comes after Iran admitted on Saturday that it had sent drones to Russia, but said it had done so before the Ukraine war.

The Washington Post reported on October 16 that Iran was preparing to ship missiles to Russia, a report Tehran rejected as "completely false".

It also comes at a time protests have rocked Iran since the September 16 death of Mahsa Amini after her arrest for allegedly flouting the Iranian republic's hijab dress code for women.

Unlike ballistic missiles, hypersonic missiles fly on a trajectory low in the atmosphere, able to reach targets more quickly.

North Korea's test of a hypersonic missile last year sparked concerns about the race to acquire the technology, which is currently led by Russia, followed by China and the United States.

Both Iran and Russia are targeted by stringent sanctions -- Iran after the US unilaterally pulled out of the 2015 nuclear deal, and Russia since it invaded Ukraine in February.

The two countries have responded to the sanctions by boosting cooperation in key areas to help prop up their economies.

Iran on Wednesday hosted Russia's security chief Nikolai Patrushev for talks on subjects that the Russian side said included "the fight against terrorism and extremism" as well as measures to counter Western interference.

A hypersonic missile is maneuverable, making it harder to track and defend against.

While countries including the United States have developed systems designed to defend against cruise and ballistic missiles, the ability to track and take down a hypersonic missile remains a question.

Thursday's announcement comes against a backdrop of stalled talks on reviving the 2015 nuclear deal.

The deal Iran reached with Britain, China, France, Germany, Russia and the US gave it relief from sanctions in return for guarantees it could not develop an atomic weapon.

The deal collapsed after the US's unilateral withdrawal in 2018 under then president Donald Trump.

The IAEA said Thursday it had seen "no progress" in discussions with Iran over undeclared nuclear material at three sites, a sticking point in the talks aimed at reviving the accord.

Iran has been enriching uranium well over the limits laid down in the 2015 deal with world powers, which started to unravel when the United States withdrew from it in 2018.
#Donald Trump
Add Comment