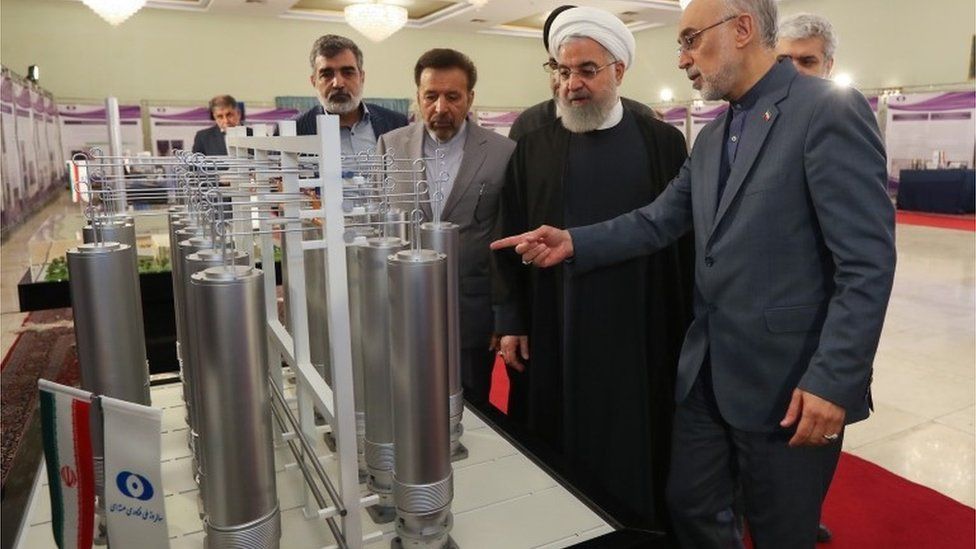 He showed what he said were copies of Iran's "deception plan", including handwritten notes in Persian which said Iran needed to prepare a "cover story".

Iran denies it had a secret programme, saying Israel forged the alleged proof.

It has not yet responded to Mr Bennett's claims.

The prime minister's declaration comes ahead of a meeting next week where International Atomic Energy Agency (IAEA) chief Rafael Grossi is due to present a report on its probe into unexplained nuclear material found at three undeclared sites in Iran.

The report says "Iran has not provided explanations that are technically credible in relation to the Agency's findings at those locations," according to Reuters news agency, which has seen the report.

Iran's foreign ministry said the report was "not fair and balanced".

Western countries suspect Iran might be seeking to build nuclear weapons in violation of conventions - something Iran strongly denies. Israel considers Iran, which does not recognise Israel's right to exist and calls for its elimination, a major threat to both Israel and the wider world.

Talks between global powers and Iran to try to revive a frayed 2015 deal curbing Iran's nuclear activities in return for the lifting of crippling economic sanctions have stalled. Iran has been pursuing activity barred under the deal after the US pulled out in 2018 and restored sanctions.

On Monday the IAEA said Iran's estimated stockpile of enriched uranium - material which can be used to make reactor fuel but also potentially nuclear bombs - was 18 times higher than allowed under the 2015 deal.

In his video message, Mr Bennett said he was holding "proof of [Iran's] lies in my hands".

"After Iran stole classified documents from the UN's atomic agency, Iran used that information to figure out what the atomic agency was hoping to find, and then created cover stories and hid evidence to evade their nuclear probes."

He said documents taken by Israeli intelligence agents in a daring raid on a warehouse in Tehran in 2018 contained proof of Iran's subterfuge.

He showed copies of the documents, including what he said were handwritten notes in Persian by Iran's then-defence minister to its top nuclear scientist Mohsen Fakhrizadeh. Mr Bennett said one read: "Sooner or later, they [the IAEA] will ask us and we'll need to have a comprehensive cover story for them."

Mr Fakhrizadeh was killed by a satellite-controlled machine-gun in Tehran in November 2020 in an assassination which Iran blamed on Israel and an exiled opposition group.

Israel has neither confirmed nor denied responsibility.

Iran has previously said the materials Israel says it took from the warehouse were fake.