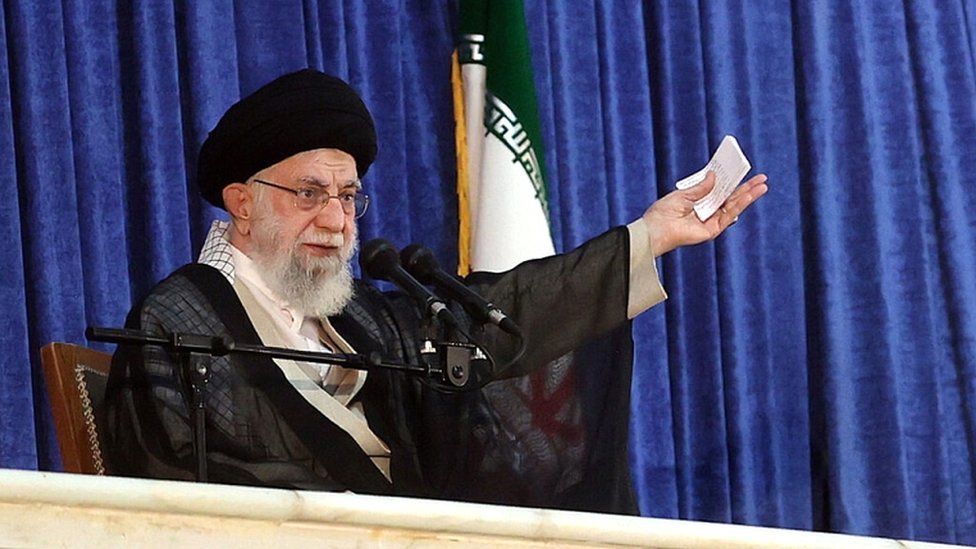 Iran's Supreme Leader, Ayatollah Ali Khamenei, has accused "enemies" of Iran of stirring up unrest to try to overthrow the Islamic Republic.

He said those who opposed Tehran hoped to use protests to strike a blow at the country.

His comments come after several weeks of demonstrations in cities over the rising cost of basic foods.

The ayatollah has long insisted that US sanctions are to blame for the soaring prices of basic foods in the country.

"Today the enemy counts on popular demonstrations to strike the Islamic system," he said in a televised address on Saturday.

The enemy "hopes to turn the people against the Islamic Republic by psychological means, through the internet, money, and the mobilisation of mercenaries," he said.

"The Americans and the Westerners made miscalculations in the past on various questions," he added. "Still today, it's a miscalculation that they think they can make the Iranian nation oppose the Islamic Republic."

Some 37 people are said to have died after a building collapsed two weeks ago in the south-western city of Abadan, in the deadliest incident of its kind in Iran for years.

The disaster has been blamed on structural faults, poor safety standards and the flouting of regulations.

Thirteen people have been arrested, including the city's mayor.

However, protesters are blaming the wider authorities, accusing them of negligence and corruption.

Demonstrations have also been held in other parts of Iran, with shouts of "death to Khamenei!" heard on unverified video posted on social media - and similar shouts were heard at protests in the southern port city of Bushehr, reports say.

Watch: The aftermath of a deadly building collapse in Iran
Add Comment