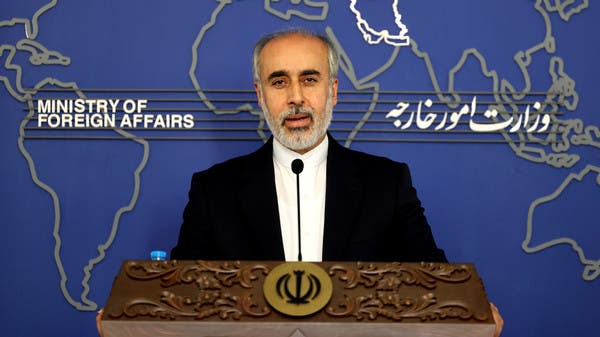 Iran says has not received US response on nuclear proposal

Iran has not received the United States’ official response to its last proposal on the revival of the 2015 nuclear deal, foreign ministry spokesman Nasser Kanani said Monday.
“Iran is waiting to receive the response from other parties, notably that of the American government,” he said during his weekly news conference in Tehran.

His remarks come after the United States last Thursday said Tehran’s latest response on reviving the 2015 accord was “not constructive.”

“We can confirm that we have received Iran’s response through the EU,” State Department spokesman Vedant Patel said late Thursday in Washington.

“We are studying it and will respond through the EU, but unfortunately it is not constructive.”

Kanani said on Monday that Tehran had “never received a response... saying that its position was not constructive.”

He characterized Iran’s response as “constructive, clear and legal.”

“Iran is trying to cancel sanctions to economically benefit the Iranian nation and this is one of its top priorities,” Kanani said.

The European Union put forward on August 8 what it called a final text to restore the 2015 nuclear accord, which was abandoned by former US president Donald Trump in 2018.

Talks to revive the 2015 accord known as the Joint Comprehensive Plan of Action have been ongoing in Vienna since April 2021.

The deal granted Iran much-needed sanctions relief in return for curbs on its nuclear program to prevent it from acquitting a nuclear weapon, a goal that Tehran has denied pursuing.
#Donald Trump
Add Comment