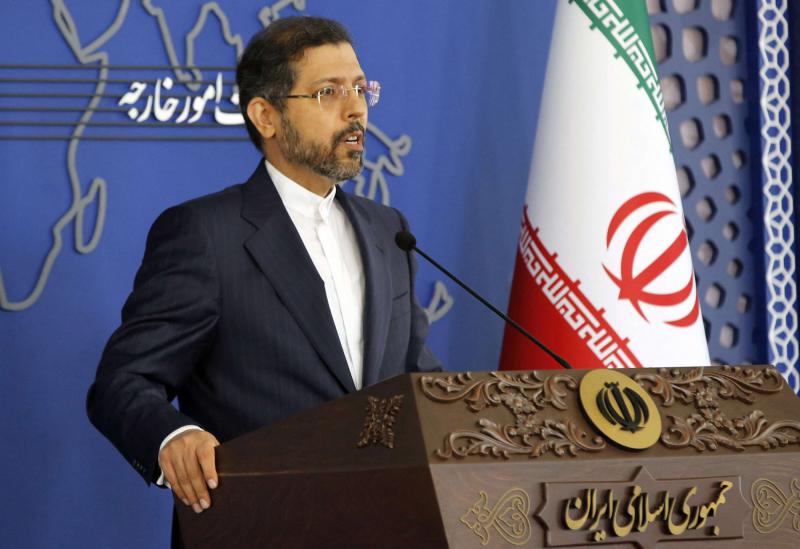 Saudi Foreign Minister Prince Faisal bin Farhan voiced strong reservations on the Iran nuclear negotiations, which are set to resume in a few weeks.
The enthusiasm of Iranian officials’ about talks with Saudi Arabia has waned in recent weeks, in a significant shift from the past few months that were marked by Tehran’s keenness to leak news of meetings with their Saudi counterparts.

Observers attributed this shift to the fact that Iran had achieved what it wanted through these talks, which were held to show that Saudi Arabia was looking for a settlement on regional issues, after refusing for years to even discuss such matters.

Iranian Foreign Ministry spokesman Saeed Khatibzadeh said on Monday that talks between Riyadh and Tehran have not progressed.

He added in a press statement, “There is no development in the talks with Saudi Arabi and we are waiting to see if there is a will for dialogue to progress,” stressing that his country will not negotiate with neighbouring countries over the nuclear agreement.

Khatibzadeh’s statements came a day after Saudi Foreign Minister Prince Faisal bin Farhan said talks with Iran would continue and that an additional round of negotiations between the regional rivals was expected soon.

In an interview with the English service of France 24, Prince Faisal pointed out that the four previous rounds of talks were merely “exploratory” rather than substantive, but said both sides were committed to engagement.

“The talks so far have been exploratory in nature. They have been casual but not substantive. We are committed to a substantive discussion with Iran on addressing the concerns that we and other countries in the region have, that would allow us to come to a normal relationship with our neighbours Iran,” Prince Faisal said.

He voiced strong reservations, however, on Iran nuclear negotiations, which are set to resume in a few weeks, citing Tehran’s past deception about its nuclear activities.

After years of rivalry and lack of diplomatic relations, Saudi Arabia and Iran have been moving towards mending ties thanks to at least four rounds of behind-closed-doors talks mediated and hosted by the government of Iraqi Prime Minister Mustafa al-Kadhimi.

Tehran and Riyadh have been involved in security-oriented talks in Baghdad ever since April when Tehran also resumed talks with major world powers over reviving a 2015 nuclear deal, officially known as the Joint Comprehensive Plan of Action (JCPOA).

But the next round of talks is yet to be scheduled according to press reports. Some Gulf media outlets reported that the two sides had been expected to hold a meeting in Baghdad on November 2. But the encounter was postponed until an unspecified date. The postponement of the new round of talks took place before the assassination attempt on Kadhimi, media sources said.

In late October Khatibzadeh said that Iran and Saudi Arabia have made initial agreements on certain issues but “we are waiting for their finalisation.”

Observers linked the waning of Iranian enthusiasm to the election of hard-line President Ibrahim Raisi, who had often held positions hostile to the kingdom and is not ready to make any concessions for a rapprochement with Saudi Arabia.

Despite his statements in which he said that he supports “the opening of the Saudi embassy in Tehran” and that “strengthening relations with all countries of the world and neighbouring countries is our top priority,” the reality shows that Tehran’s official position towards dialogue has begun to change since Raisi’s victory in the elections last June.

Observers told The Arab Weekly that Iran dealt with the issue of talks as a way to show that its relationship with the regional environment is not bad after many countries in the Arab Gulf region voiced their concerns about the Iranian nuclear programme and demanded that Iran commits to ending its threats to regional security in any future agreement.

In an interview with the American network CNN, Prince Faisal had earlier said that “the countries that are most at risk from a nuclear armed Iran, are other countries in the region, including, of course, the Kingdom of Saudi Arabia and the GCC states.”

“So it’s entirely logical that we should be part of the discussion and part of the dialogue. And we hear from our European and American partners that they understand that the concerns of the countries of the region must be addressed and must we must have a role in those discussions and in those negotiations,” he added.

Riyadh views negotiations with Tehran as essential for a solution in Yemen, a view based on the conviction that the Houthis have so far been intransigent in order to serve a broader strategy that Iran is pursuing to score wins on different fronts, whether in its disputes with Saudi Arabia, or differences with other countries in the region or in nuclear negotiations.

With this in mind, observers consider that the kingdom has become increasingly convinced that dialogue with Iran is the best way to resolve current crises, including the Yemeni conflict.

Since 2015, Riyadh has led a military coalition to support the government against the Houthi militias after they seized the capital Sana’a.

Riyadh accuses Iran of supporting the Houthis with weapons and drones, but Tehran says it only provides the militias with political support.
Add Comment