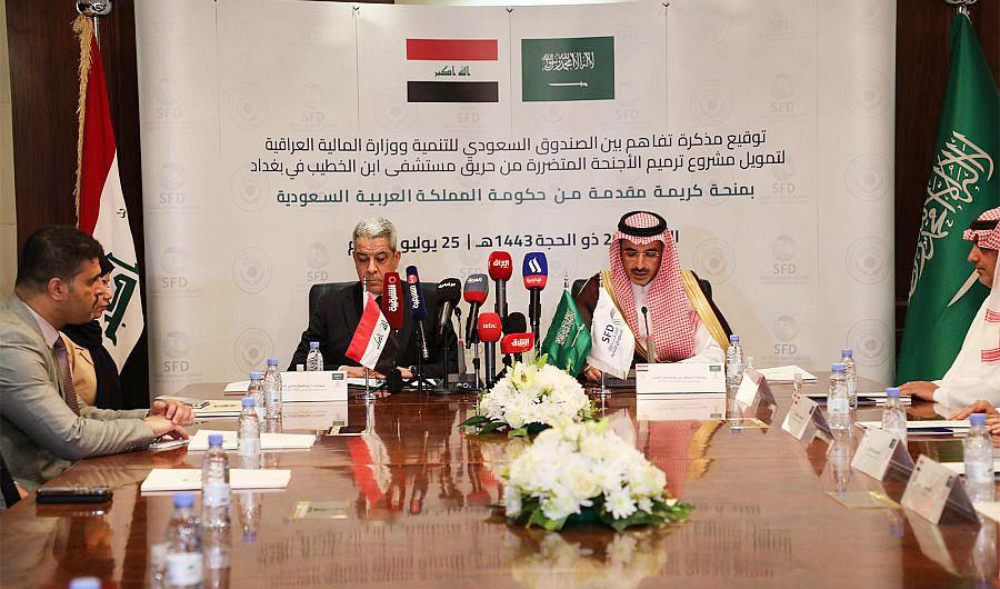 The Saudi government has allocated a grant to finance renovation work at an Iraqi hospital badly damaged in a fire that left dozens of patients dead.
Money from the Saudi Fund for Development will be put toward a redevelopment project at the Ibn Al-Khatib Hospital in Baghdad, the Saudi Press Agency reported.

More than 80 people died and at least 100 were injured in the blaze which broke out in April last year as the hospital was being used to treat COVID-19 patients.

A memorandum of understanding agreeing the grant funding was signed at the fund’s headquarters in Riyadh by SFD chief executive officer, Sultan Al-Marshad, and the Iraqi envoy to Saudi Arabia, Dr. Abdul Sattar Hadi Al-Janabi, acting on behalf of Iraq’s Ministry of Finance. The signing ceremony was also attended by the Saudi ambassador to Iraq, Abdulaziz bin Khalid Al-Shammari.

During the meeting, Al-Janabi praised the important role played by the Kingdom through the SFD in supporting Iraq’s health sector and infrastructure, help that improved job opportunities and access to essential health services for the Iraqi people.

Al-Marshad said the MoU reflected the Kingdom’s willingness to support the social and economic development of Iraq through assistance with financing infrastructure and health projects such as the one at Ibn Al-Khatib Hospital.

Over recent years, and during the International Conference for the Reconstruction of Iraq, held in Kuwait, the Kingdom has announced SFD soft loans of $1.5 billion toward development schemes in Iraq.

Two such projects, amounting to more than $40 million, have been signed to finance the establishment of Al-Saqlawiya Hospital in the western Iraqi governorate of Al-Anbar, and the construction of grain silos in the southern governorate of Diwaniya.

The programs being backed by Saudi Arabia are aimed at achieving food security and self-sufficiency for Iraq while improving basic healthcare services in the country.
#COVID-19  #Covid
Add Comment