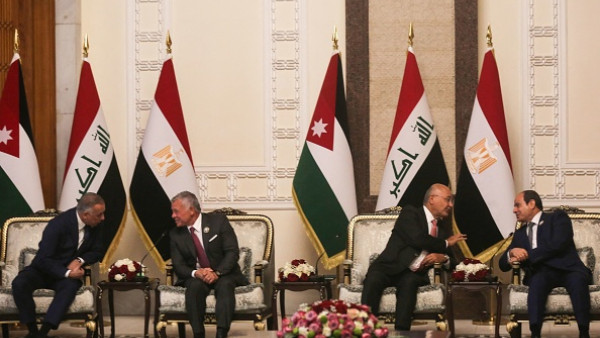 The summit, which sources said will be held in Baghdad at the end of August or the beginning of September, will bring together representatives from Iran, Turkey, Saudi Arabia, Kuwait, Jordan, and the Syrian regime.

Iraqi officials are planning a summit this summer that will include representatives from Saudi Arabia, Turkey, and Iran, in a bid to quell regional disputes.

Prime Minister Mustafa Al-Kadhimi has appointed a committee, headed by Senior Undersecretary Nizar Al-Khairallah, to work on preparations for the summit, according to a high-ranking Iraqi ministry of foreign affairs official who spoke to the The New Arab's Arabic language service Al-Araby Al-Jadeed.

Al-Kadhimi recently told a group of journalists in Washington that Iraq will seek to play a bigger role in bringing regional powers together.

The summit, which sources said will be held in Baghdad at the end of August or the beginning of September, will bring together representatives from Iran, Turkey, Saudi Arabia, Kuwait, and Jordan, in addition to Syrian regime officials and representatives of the European Union.

No invitations have been sent out yet and Iraqi officials are still working on preparing the agenda - which will address security issues, as well as political and economic stability - but sources said they were confident the summit will be well-attended.

Iraq organised a tripartite summit with Egyptian President Abdel Fattah Al-Sisi and Jordanian King Abdullah II in Baghdad in June, promoting itself as a regional facilitator.

"Al-Kadhimi’s government considers the stability of the country to be dependent on stability in the region. This is why it has long been working on mediation and on reconciling the views of the various regional and international parties," Amer Al-Fayez, a member of the Foreign Relations Committee in the Iraqi parliament, told Al-Araby Al-Jadeed.

Political disputes and religious differences between Saudi Arabia and Iran have magnified regional disputes, leading to what some analysts have defined as a "cold war".

Al-Kadhimi is seen as friendly to the US and has tried to check the power of Iran-aligned militias.

His government has also condemned a US air raid against Iran-aligned fighters along its border with Syria in late June, calling it a violation of Iraqi sovereignty.

Last month, Iraq and the US sealed an agreement formally ending US combat missions in Iraq by the end of 2021, with some US forces still operating there in an advisory role.

Al-Kadhimi had faced increasing pressure from Iran-aligned parties and paramilitary groups, who oppose the US military role in the country.